Book Review: We The People: Towards An Accountable Democracy 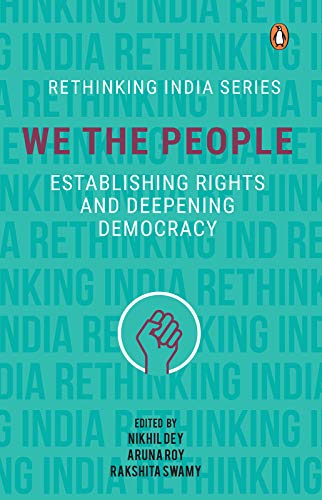 We The People: Establishing Rights and Deepening Democracy is the fourth volume in the Rethinking India series, assuming its title as the opening phrase of the Preamble of the Indian Constitution. The book is divided into nine essays, including the introduction. These essays altogether make space for many profound arguments on accountability, economic and social inequalities. The...

We The People: Establishing Rights and Deepening Democracy is the fourth volume in the Rethinking India series, assuming its title as the opening phrase of the Preamble of the Indian Constitution. The book is divided into nine essays, including the introduction. These essays altogether make space for many profound arguments on accountability, economic and social inequalities. The book's fulcrum lies in understanding various impediments in enjoying universal rights and cherishing constitutional values. It broadly talks about the interdependent economic and social inequalities while scrutinizing the flaws of the current democratic setup.

The Conundrum Of Economic And Social Inequalities

Opening the discourse on the growing economic inequality Amitabh Behar and Savvy Misra, in the second essay, Fighting Inequality: Rights and Entitlements, cites Oxfam's report. The report points towards the growth of concentration of wealth, which is alarming in India, with only nine men owning more wealth than 50 percent of the Indian population. Recently, the Pew Research Center has reported an exponential increase in the poor category of people by about 75 million due to Covid-19 followed by economic recession and migrant crisis.

However, circumscribing the debate on inequality to economic conditions is unfair. The India Inequality Report of 2018 has highlighted that there has been marginalisation and exclusion of individuals, communities, and religious groups, along with widening economic inequalities. The authors explain that around 43 percent of Adivasi children are malnourished, 1.5 times higher than the non-tribal children, while the life expectancy of Dalit women is 14.6 years less than a high-caste woman. Though these social inequalities are not limited only to caste, it extends to every factor that marginalises a community, like religion. The Sachar Committee has reported that religious minorities suffer exclusion. For instance, the case of Muslims, though they are the second-largest religious group in India.

In their book, An Uncertain Glory: India and Its Contradictions, Prof. Amartya Sen and Jean Drèze have evaluated India's historical legacy of multiple social inequalities. Prof. Sen has further asserted that economic inequalities in India as the manifestation of social inequalities. But, what is the reason that social disparities have persisted even after the adoption of the Constitution? Amitab and Savvy have held the early withdrawal of the State as an instrument of 'inclusion,' crony capitalism, and rampant corruption in both welfare schemes and allotment of State resources to private parties as liable.

Education and health are instrumental in the eradication of inequality on both social and economic levels. Dr. Baba Shaheb Ambedkar has even vouched for education in his most famous slogan, 'Educate, Agitate and Organize.' The essay The Right to Education and Health: Is the State Giving Up? discusses education and health in detail. The authors of this essay have highlighted some crucial policies brought in the early 2000s to reform both education and health. India has adopted Sarva Shiksha Abhiyan in 2001, the Right to Education Act in 2009 for the education sector, and National Rural Health Mission in 2005 for the health sector. However, even after adopting such policies, both the sectors remain exposed in the wake of Covid-19. Both of these sectors have suffocated due to low investment by the State, while 47.2 percent of schools do not have even basic drinking water and toilets facilities, about only 7 percent of health sub-centres are functioning as per the Indian Public Health Standards. As discussed earlier, the withdrawal of the State as an instrument of inclusion leads to the privatisation of resources quintessential for maintaining social equality. Privatisation of schools remains the leading cause of exclusion of marginalised students from getting a better education. Even after the enactment of RTE, about 4.5 crore children are devoid of schooling.

Social And Audited Democracy Towards Accountability

The solutions to the problem identified by Amitab and Savvy are answered in the essay From Social Democracy to Social Accountability authored by Paras Banjara, Rakshita Swamy, and Shankar Singh. The authors express the immediate need for social accountability. In his speech on 26 November 1949, Ambedkar had suggested making Indian political democracy a social democracy. On Ambedkar's line, the authors have fragmented accountability towards people into six essential elements using the 'Bhilwara Principles of Social Accountability'—actionable information, a dated acknowledgment of complaints, time-bound action, participation of all concerned, protection of complainant, an official collective platform for redress. The Comptroller and Auditor General has acknowledged the Bhilwara principles as 'minimum principles' to maintain the standards of social auditing.

Further, Prashant Bhushan and Anjali Bhardwaj, in The Role of Independent Institutions in Protecting and Promoting Constitutional Rights, firmly asserts social accountability as key to democratic value. In extension, the authors streamline the mechanism for social accountability. According to the authors, four institutions – Judiciary, Information Commissions (IC), Lokpal, and Central Bureau of Investigation (CBI) can play a catalyst in socially auditing political democracy. The authors argue that the judiciary has not played its role to the point required and there lies some sense of opaqueness by quoting some infamous incidents in the history of the highest court like the press conference by four senior judges of the supreme court and the sexual harassment allegations against the former Chief Justice of India. On the other hand, the IC seems to crumble; eleven ICs had a waiting time for more than one year to dispose of cases. While the Lokpal and Lokayuktas Act has remained toothless, CBI has carried the reputation of a 'caged parrot,' as referred by the apex court in Vineet Narain v. Union of India. The authors have offered a strong position against any threat to the independence of these four institutions. The argument of authors depicts the quintessential role of these institutions in upholding the democratic value.