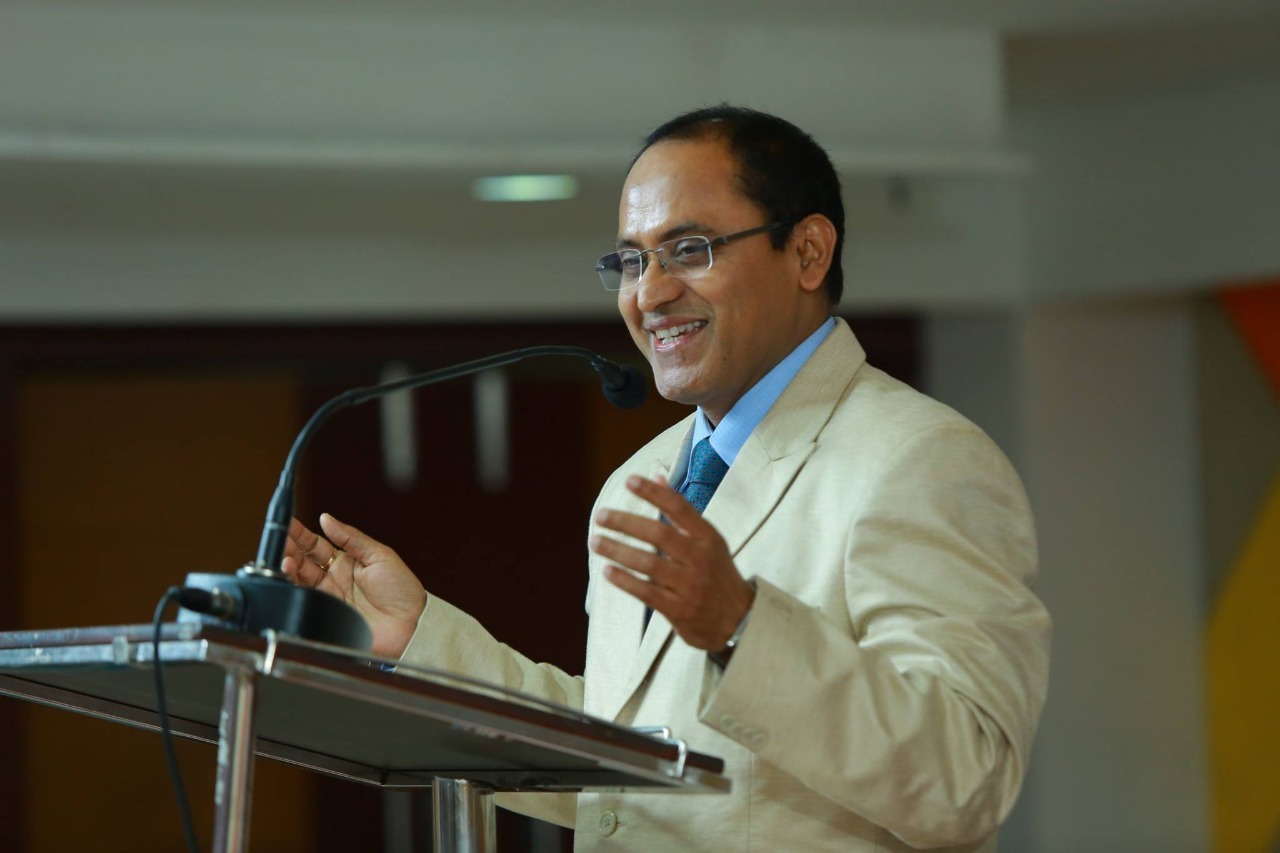 It is not a common occurrence in a High Court to have a puisne judge from another state. Therefore, it was with great amusement that the High Court bar dealt with the news that a judge from Andhra Pradesh High Court was assuming charge in the Kerala High Court. Justice Dama Seshadri Naidu had a reputation which preceded him, and even before he assumed office on 30.06.2014, the 'background...

It is not a common occurrence in a High Court to have a puisne judge from another state. Therefore, it was with great amusement that the High Court bar dealt with the news that a judge from Andhra Pradesh High Court was assuming charge in the Kerala High Court. Justice Dama Seshadri Naidu had a reputation which preceded him, and even before he assumed office on 30.06.2014, the 'background search' conducted by inquisitive members of bar revealed that he was a scholarly judge who had authored books on topics like Family Law, Stamp Act, Registration, Education etc.

Within few weeks after assuming office at Kerala High Court, Justice Naidu had an occasion to interact with the members of the bar as a part of the Continuing Legal Education Program conducted by the High Court Advocates Association, where he delivered a lecture on Negotiable Instruments Act. Justice Naidu opened his lecture stating that NI Act may not seem to be an 'esoteric' subject, but has a lot of 'nuances' which can offer much delight to the academically inclined. To a topic which is otherwise mundane due to stereotype cases of dishonor of cheques, Justice Naidu gave a masterly spin to make it riveting and engaging.

Only a person with so much zest for law could have spoken like that! That was quite an 'introduction scene' for Justice Naidu, making it known to the bar that he was a self-driven man with a lot of wit and wisdom in his pack, whose only motivating consideration was his romantic passion for law and justice. The bar does not generally take an instant liking to scholarly judges, though such judges might be revered and held in high esteem, for they are perceived as strict, tough and reserved. However, negating such general patterns, Justice Naidu earned the love and respect of the lawyers during his stint in Kerala High Court.

While his erudition, analytical skills, capacity for making just decisions and capability to articulate judicial reasoning in lucid language earned him the reverence of the bar, his pleasant demeanor and humble attitude endeared him to the members of the bar. The court room of Justice Naidu was not a place of tense activity, because he went about his judicial business at a tranquil pace, with a stoic detachment of sorts, exuding warmth and courtesy.

On his occasion of transfer to Bombay High Court, let's have a quick glance over some of the judgments authored by him, which might offer a peep into the working of his judicial mind.

Paeans to motherhood- Judgment on motherhood by surrogacy

Geetha P. v. Kerala Livestock Development Board Ltd. 2015(1) KHC 165, was a unique case dealt with by Justice Naidu, wherein it was held that a female employee attaining motherhood through surrogacy was equally entitled to maternity benefits under the service regulations as a woman having pregnancy through biological means. The judgment offered paeans to motherhood in the following manner. :

"For Robert Brown all love begins and ends with motherhood, by which a woman plays the God. Glorious it is as the gift of nature, being both sacrosanct and sacrificial, though; now again, science has forced us to alter our perspective of motherhood. It is no longer one indivisible instinct of mother to bear and bring up a child. With advancement of reproductive science, now, on occasions, the bearer of the seed is a mere vessel, a nursery to sprout, and the sapling is soon transported to some other soil to grow on. Now, it is Law's turn to appreciate the dichotomy of divine duty, the split motherhood.

Borrowing the words of Margaret Sanger, an American Birth Control Activist and Nurse, the judgment was concluded stating "When motherhood becomes the fruit of a deep yearning, not the result of ignorance or accident, its children will become the foundation of a new race." 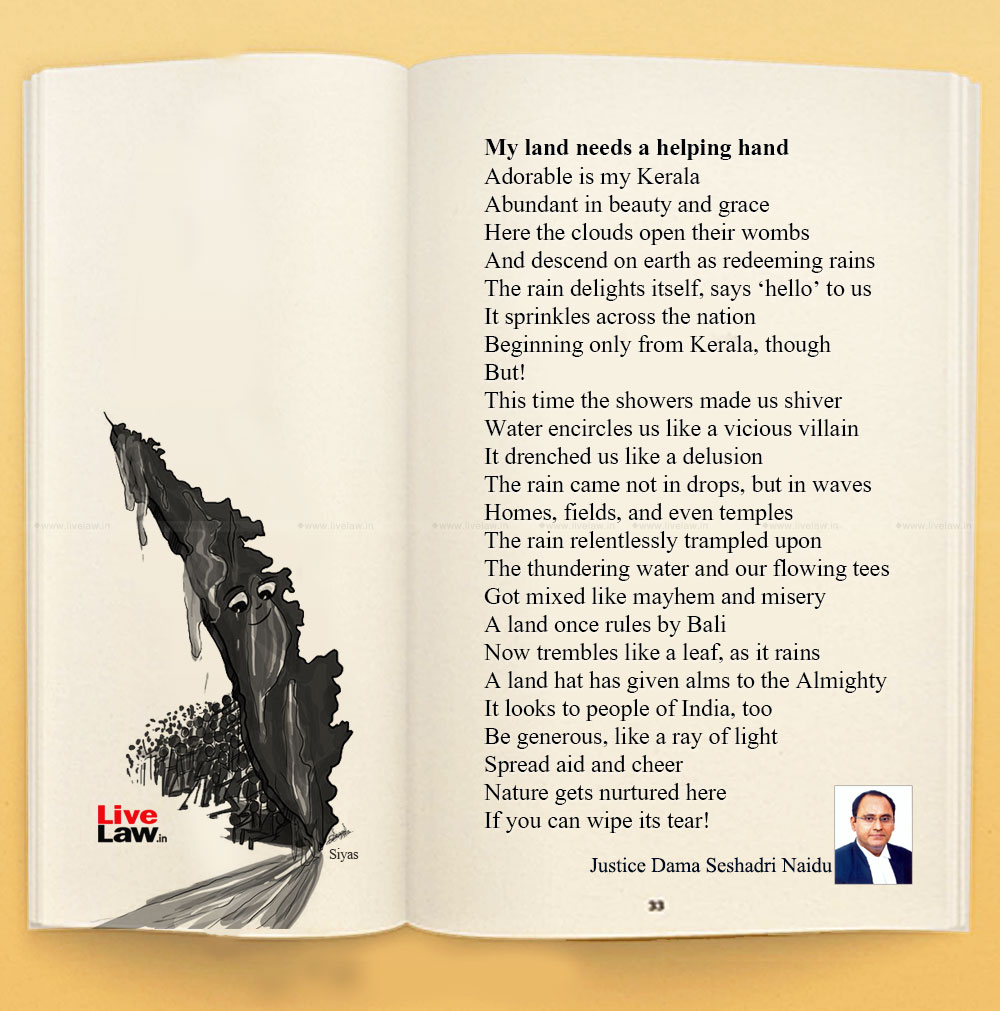 A judgment penned by Justice Naidu refused to categorize a magazine cover with a woman breastfeeding an infant as obscene, noting that "shocking one's morals" is an "elusive concept", and that "one man's vulgarity is another man's lyric".

"We looked at the picture with the same eyes we look at the paintings of artists like Raja Ravi Varma. As the beauty lies in the beholder's eye, so does obscenity, perhaps" he observed in the judgment.

The well written judgment was widely discussed and caught the attention of notable writers like William Dalrymple, who tweeted about it in his twitter handle. 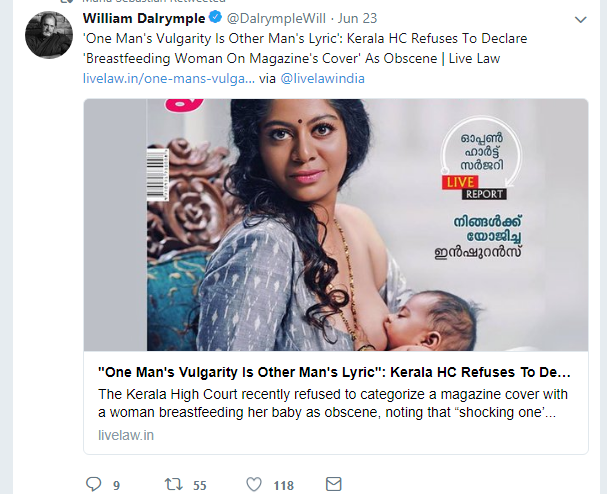 In what could be a treatise on principles of gender equality, Justice Naidu authored a judgment declaring that the rule in Kerala Abkari Shop Disposal Rules which prohibited employing women in abkari shops as unconstitutional and discriminatory. It was observed that a modern democratic society can function only if freedom to pursue varied opportunities and options without discrimination on the basis of sex, caste, race etc is ensured.

Upholding the dignity of disabled employee

While sharing a Division Bench with Justice P.R Ramachandra Menon, Justice Naidu had occasion to author a judgment dealing with the rights of a disabled employee. A woman employee of Indian Railways was rendered paralyzed on account of complications during child birth. Expressing compassion and empathy with the lady, the Court directed the railways to give her all salary benefits, without compelling her to attend office. The conduct of Railway in litigating against the disabled employee was also under harsh criticism of the court.

Striking down Sec.7(1)(c) of Co-operative Societies Act as violative of Fundamental Right to Freedom of Association.

Section 7(1)(c) of the Kerala Co-operative Societies Act 1967 states that the Registrar can refuse registration of a co-operative society if its area of operation overlaps with a previously registered society. This was a provision which remained in the statute book unchallenged for over four decades. But, the section could not withstand the judicial scrutiny exercised by Justice Naidu. The judgment is a rich exposition on fundamental rights and reasonable restrictions. The width and amplitude of the grounds of morality, public order etc in Article 19(4) were clinically examined.

It was held as observed as follows :-Even a fecund mind of excuses and justifications, I think, cannot contrive a connection between the plebeian protective restriction in S.7(1)(c) of the Act and the exalted constitutional limitation in Art.19(4).

"To drink or not to drink. That is the Hamletian dilemma of Anoop, the appellant. He has chosen to drink. He rails at the rules that obstruct his passion for the pint, his right to choose, to be let alone, to privacy, and, of all, his right to life. He claims that the laws prohibiting alcoholic drinks fall foul of the fundamental rights guaranteed to a citizen, to him. Do they? Our answer: No."

Thus begun the recent judgment authored by Justice Naidu(for himself and Justice P.R Ramachandra Menon) in Anoop M.S vs.State of Kerala and others, dealing with right to drink alcohol. The dramatic beginning of the judgments quite well befits the unusualness of its subject matter.

Though the petitioner invoked the classical principles of liberty and right to privacy, Bench chose to be formally right within the constitutionally imposed limitations. The Court was primarily enamoured by the sweep of Article 47. But it chose to sympathise with the cause of the petitioner. The parting words of Justice Naidu, extracted below, are an indication of that.:-

But, before parting with the matter, we acknowledge that "the times they are a-changing." What is today morally reprehensible and socially unacceptable may not be so tomorrow. Anoop, the appellant, may still have hope, but he seems to have raised his voice rather prematurely. We conclude with the lines of Bob Dylan, the Nobel laureate:

For the wheel's still in spin

And there's no telling who that it's naming

For the loser now will be later to win

Cause the times they are a-changing"

It's not very often that one will find the words of Bob Dylan in a High Court judgment.

No liquor license needed for serving liquor to guests.

This approach was evident in the judgment authored by him(for himself and Justice Antony Dominic) which held that no liquor license was required to be taken for serving liquor to guests at one's home. Apart from the invocation of sound interpretative tools to gather the right legislative intent, the judgment also contains emphatic statements touching upon personal liberty and privacy.

Apart from these, Justice Naidu has rendered a lot of other noteworthy judgments, many of them explaining the first principles of practice and procedure, precedents, judicial discretion, jurisdictional limitations etc, which are a must read for a beginner in the profession. His judgments have a unique style and structure, presenting the arguments and reasoning in an organized manner which reflects coherence in flow of thoughts, and can claim to have a literary quality about it.

Justice Naidu will be fondly remembered by the lawyers of Kerala as a wise and erudite judge, vested with judicial temperance and equanimity of mind, who believed that justice should be delivered strictly in accordance with law and that the exercise of judicial discretion should be circumscribed by considerations of propriety and probity. It was not possible to get away with an order from Justice Naidu's court by simply invoking equity or pleading sympathy. Not someone to be moved by sentimental considerations, Justice Naidu will be persuaded into action only if one establishes a legal right. But if a legal injury or a violation of a constitutional right is shown, then Justice Naidu will not show any hesitation in applying judicial powers to remedy the situation.

The members of the bar will vouch for the fact that Justice Naidu never tolerated anyone vitiating the decorum of his court. Interruptions, intemperate submissions etc were a strict no in his court. At the same time, he was not a stickler of protocol when it came to interactions outside the Court. On a heartwarming occasion, he astonished the lawyers by speaking in Malayalam at a function of the High Court Advocates Association. Even his farewell speech was concluded in Malayalam, much to the delight of the audience.

When Kerala was reeling under the flood disaster, Justice Naidu penned a poem in Telugu appealing to Telugu people to give aid to Kerala. The poem was later translated into English and Malayalam and was published by media.

He has conquered the hearts and minds of Keralites- both as a judge and as a person.

As he sets voyage to another port city in the Arabian coast to adorn the bench of Bombay High Court, the Kerala legal community wishes him all the best.