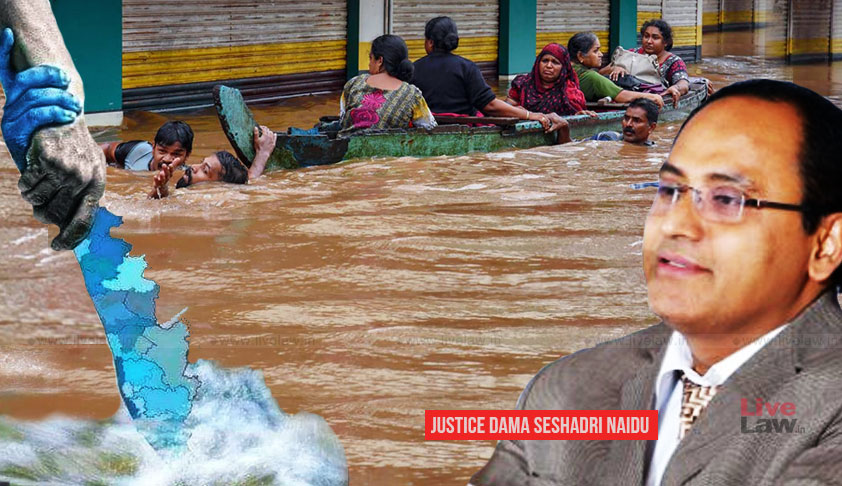 Showing solidarity with the flood-ravaged Kerala, High Court judge, Justice Dama Seshadri Naidu has authored a beautiful poem calling on the people of the country to stand with the State and help it through the calamity that has already claimed the lives of more than 370 people.Justice Naidu, who is originally from Andhra Pradesh, had initially written the poem in Telugu, appealing only to...

Showing solidarity with the flood-ravaged Kerala, High Court judge, Justice Dama Seshadri Naidu has authored a beautiful poem calling on the people of the country to stand with the State and help it through the calamity that has already claimed the lives of more than 370 people.

Justice Naidu, who is originally from Andhra Pradesh, had initially written the poem in Telugu, appealing only to Telugu people. It was published in Telugu newspapers and its Malayalam translation was then published in Malayalam dailies.

In the poem’s English translation, he now appeals to the entire nation to come forward to help Kerala.

Here is the full text of the poem: With Kerala reeling under unprecedented flood crisis, the judiciary also seems to be joining hands to do its bit for the State. Leading by example, Supreme Court judges have contributed Rs. 25,000 each to the Kerala flood relief fund. Earlier, Supreme Court judges, Justice Kurian Joseph and Justice KM Joseph had contributed to the drive organised by Apex Court lawyers on Saturday to collect relief materials. Materials such as bed sheets, nighties, t-shirts, sanitary napkins, diapers biscuits, rusk, maida, dal, undergarments etc. were collected from 4.30 PM onwards, at the ILI campus opposite the Supreme Court.

Further, judges of the Kerala High Court reportedly visited certain clood relief camps on Sunday, interacting with the inmates and taking stock of the condition in the camps. While Justice Shaji P. Chaly visited the camp functioning in the Maharaja’s College, Justice Devan Ramachandran and Justice Jayasankaran Nambiar visited the camps at Pallippuram.

Additionally, all judges and non-judicial staff members of the Tripura High Court, as well as the District Judiciary, have contributed a day's salary to the Chief Minister's Distress Relief Fund. According to a press release issued by the Court, the initiative was taken at the behest of Chief Justice Ajay Rastogi.

The legal fraternity in the State as well as throughout the country is also making notable contributions to the relief works. On August 17, the Kerala High Court Advocates Association set up a collection centre for materials required at relief camps, which has been functioning without break since then. It has been coordinating with about 50 camps in Ernakulam district to ascertain the requirements in each camp.

The Association has been involved in rescue operations as well, with brave-hearts bracing adverse weather conditions to rescue persons stranded in the nearby Moolampally island. The efforts were supported by sitting judges of the High Court, who visited the collection centre recently, interacting with the members and motivating them.

While the activities of High Court Advocates Association are primarily focused in the Ernakulam district, relief operations in other flood-affected district are being undertaken by bar associations of subordinate judiciary. For instance, the Trichur Bar Association of the badly hit Thrissur district organized relief activities for the district. The Association cancelled its Onam celebration programs to contribute to the relief fund, showing complete solidarity with the State.