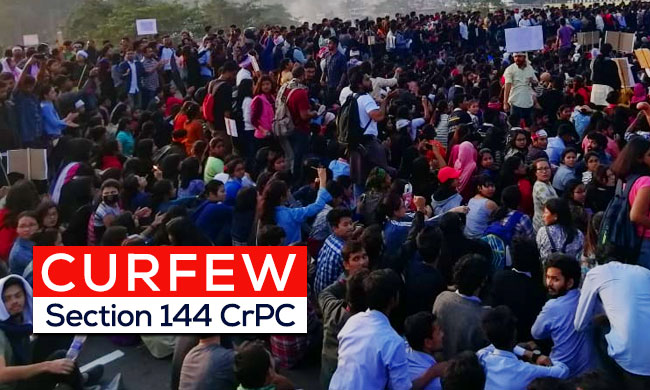 In the last few months various news platforms have reported instances where the State has invoked Section 144 of Cr.P.C. While, the section has been used in common parlance by professionals and laymen, its very nature has barely been explained during news reporting. It is common belief that Section 144 restricts gathering of inviduals. However, it actually provides wide powers to...

In the last few months various news platforms have reported instances where the State has invoked Section 144 of Cr.P.C. While, the section has been used in common parlance by professionals and laymen, its very nature has barely been explained during news reporting. It is common belief that Section 144 restricts gathering of inviduals. However, it actually provides wide powers to wide powers to magistrates cases requiring urgent measures. The use of this provision was seen in January during the protests by JNU students, in February during the Delhi Riots and March onwards during the coronavirus pandemic.

Quite interestingly, the provision seems to have been used by the Delhi Police without any sanction of law. Most of the orders under Section 144 in Delhi are issued by the Assistant Commissioners of Police (ACP) or the Deputy Commissioners of Police (DCP). This includes the recent orders issued for the COVID-19 'lockdown'. A careful reading of the Delhi Police Act and the Cr.P.C., however, reveals that the ACP and DCP do not have powers to issue orders under Section 144 – they have to be issued either by the magistrates, or by the commissioner himself.

POLICE AND MAGISTRACY IN DELHI VS. ELSEWHERE

In most parts of the country, the police at the district-level is under the control & supervision of the District Magistrate. Delhi, however, follows a commissionerate-system, where the police is a separate body and is not under the control and supervision of a district magistrate. Instead, the Delhi Police Act has conferred certain magisterial powers on senior police officers. The Cr.P.C., however, is not drafted with the commissionerate system in mind – for instance, it refers to the Superintendent of Police and not the Deputy Commissioner of Police – and this could lead to peculiar situations.

Two sections of the DP Act require a careful reading before attempting to reconcile them with the Cr.P.C. In essence, while the Commissioner can be authorized, by special notification, to exercise powers of a district magistrate, the ACPs and DCPs can only be empowered to exercise powers of an executive magistrate. Section 20 (5) of the Delhi Police Act reads:

"Nothing in this section shall preclude the State Government from conferring, under any law for the time being in force, on a Commissioner of Police, all or any of the powers of an Executive Magistrate in relation to a metropolitan area."

"The Central Government may, by notification in the official Gazette and subject to such conditions and limitations as may be specified therein, empower-

This leads us to the main question - who are empowered to issue directions under Section 144?

In cases where, in the opinion of a District Magistrate, a Sub-Divisional Magistrate or any other Executive Magistrate specially empowered in this behalf, there is sufficient ground for proceeding under this section and immediate prevention or speedy remedy is desirable, such Magistrate may, by a written order(…)

A CASE OF ULTRA VIRES ORDERS

For the extension of prohibitory orders during the lockdown period, orders were issued by all the ACPs throughout Delhi. Keeping in mind the "conferred" versus 'appointed" dichotomy created through the Mohd. Salim judgment and the lack of authority emanating out of it, such orders are without authority. This issue was also in news earlier, when the Lieutenant Governor of Delhi had remarked that since Delhi follows a commissionerate-system, the powers of Section 144 lie with ACPs and cannot be exercised by SDMs. However, the L-G's interpretation does not have any backing of the statute.

Further, the prohibitory powers under Section 144 are kept with the magistrates – separate from the general police for a reason, and it forms an inherent part of separation of powers. The order passed by ACPs under Section 144 Cr.PC therefore reflect the bigger issue of separation of powers where the police has usurped powers of magistrates – disturbing the balance that the legislature had intended to create proper checks and balances.

COVID-19 LOCKDOWN AND BEYOND

This case of ultra vires prohibitory orders is prevalent during the COVID-19 pandemic, as the city has been shut down using these powers. The issue exists even beyond the pandemic prohibitions, however, as it appears that orders under Section 144 Cr.PC are habitually issued by the ACPs for their respective areas, and are often re-promulgated immediately upon expiry. These orders include the directions to hotels to maintain guest registers, to ATMs and banks to have CCTV cameras, etc. While such repetitive orders are anyway illegal for non-application of mind,[5] it is interesting to note that many of the practices which now appear "regular" arise not from any order having the backing of the legislature, but from such orders passed beyond jurisdiction.

[1] For instance, Section 18(3) of the Right to Information Act, 2005 confers power of a civil court upon the information commissions.