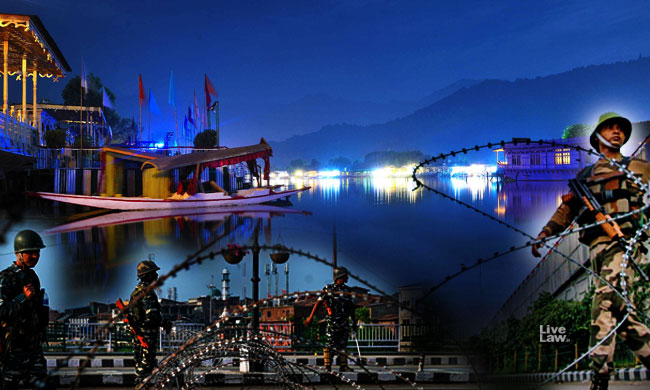 "Har Sokhta Dhar Kashmir May Ayad Dhar Murge Kabab Ast Ball Wa Par Mein Ayad." I was in my 4th Grade in 2004, when my father used to sing this farsi couplet by a poet Urfi. It essentially means that "if a burned or fried hen is brought to Kashmir even that hen will start growing full feathers." 'This is the defining trait of spellbinding Kashmir' he used to say and I couldn't agree...

I was in my 4th Grade in 2004, when my father used to sing this farsi couplet by a poet Urfi. It essentially means that "if a burned or fried hen is brought to Kashmir even that hen will start growing full feathers." 'This is the defining trait of spellbinding Kashmir' he used to say and I couldn't agree more. However, all that has transpired in last many years particularly in past 3 months in Kashmir make us wonder whether this couplet holds relevance anymore?

On 27th of July 2019, When 10,000 additional forces were deployed in the valley (which is already one of the most heavily militarized zone in the world) the rumor mills were rife, suggesting that the special status of state might be under attack. But some thought it was merely a rumor, but on 2nd of August when another 28,000 troops were brought in and the Amarnath Yatra was called off, the panic gripped the entire valley once again. People started gathering in huge numbers to replenish supplies and to keep stock of important essentials. I remember the last conversation I had with my brother on 4th August, 2019 at mid-night saying "this time the whole valley might be decimated into shreds" and before we could talk further the entire mobile network went completely off the grid in the Jammu and Kashmir.

On 5th of August, when the worst nightmare of every Kashmiri came true I was in the Supreme Court and all I was hearing from each side were lawyers congratulating each other, celebrating the move, calling it historic, while I, on the other hand, was repeatedly calling my mother, but to no avail. Those who justify these military actions and restraints on people in Kashmir, are clearly not aware or choose to ignore, how it could affect the mental health of the people in the valley. Many of the Kashmiris living outside, including myself have experienced that usually every visit to home comes with the stories of conflict, Protests, victims of pellet guns, detentions, enforced disappearances etc. The reality is that a person cannot really extricate oneself from these discourses as they form a very substantial part of Kashmir's story. Despite being acquainted with these realities, hearing people at home talk about these gory incidents occurring every now and then, causes an uncharacteristic numbness in one's body.

However, in the case of non- resident Kashmiris, when we return back from the valley after holidays, there are enough distractions for us that provide us a wiggle room to keep our mental balance. However, those left in the valley have no such distractions. They are still continuously living an atmosphere of fear, conflict, and uncertainty. The years of conflict have already taken a huge toll on people's mental health. In 2015 a Survey by the medical humanitarian organization, Médecins Sans Frontières/Doctors without Borders (MSF) suggested that 1.8 Million adults in Kashmir valley, almost 45% of population, showed symptoms of mental distress, 41% showed signs of depression, and 26% signs of anxiety. It is precisely the reason why actions like communication blockade or undeclared Curfews, when imposed in Kashmir brings along an entirely different form of hopelessness and panic among Kashmiri', panic that people outside the valley do not comprehend most of the time.

As I write this article, it is the 89th day of continuous restraint in Kashmir. Every sector in valley has received a severe blow. The losses, as per the estimates of Kashmir Chamber of Commerce & Industries (KCCI), have crossed over Rs 5,000 crore in the past two months. There is a continuous shutdown of the Internet and of Prepaid mobile services which curtails essential communication. In a Petition I filed before the Supreme Court when all the channels of communication were locked down, Sr. Advocate Sanjay Hegde made a compelling argument before the Court that "Your lordships have ruled in many cases that Fundamental Rights do not Part Company even at the prison gate and the right to communicate with loved ones cannot be easily taken away." In my Petition although, the interim relief was provided in facilitating my visit however, as far as rights of others in Kashmir are concerned, they seem to be in a continuous suspension. As the services remain suspended, the Solicitor General continues to justify the internet blockade on the mere pretext of National Security and Trans-border implications. In addition to this, the government and the pliant media channels have been constantly indulging in 'normalcy' acrobatics again and again which has been only adding to the anger of the people.

The order passed by the Supreme Court in my Habeas Corpus Petition, facilitated my visit to check the wellbeing of my family. It provided me an opportunity to see the ground reality of Kashmir firsthand. On reaching Kashmir I observed that the valley looked nothing like normal which the government was so far falsely claiming. The deserted roads filled with barbed wires and barricades added to the eeriness of the place and were sometimes disturbed by an odd child peeking out of the window. On my way to home all I could think of was Aga Shahid Ali's famous poem "after you this world lost all its papers- where shall I write to you?.....And where shall I post it to? This country shahid is still without a post office"

Today this whole situation has snowballed into a mental health issue which is not getting the attention it deserves. The reaction of the people post abrogation was suppressed to such an extent, that anger has got mixed into them, only to stay or perhaps to erupt at the later point if the situation remains to be unaddressed. I say this with full responsibility that in Kashmir there is good, sizeable population, who keep update on the Supreme Court Proceedings on Kashmir, as if it is the beacon of hope for them in this conundrum of despair but delay in restoring their fundamental rights will not instill much of a confidence in the courts. Today as I hear my father's voice on the phone saying 'they have ruined everything here' makes me doubtful whether he still sings that Farsi couplet and most importantly I wonder if now, even a healthy hen, will get burned, if it clucks too loudly.