The Union Finance Minister of India has on March 24, 2020 notified in the official gazette that the threshold for triggering insolvency proceedings under the Insolvency and Bankruptcy Code, 2016 ("Code") stands increased with immediate effect from Rs.1,00,000/- to Rs.1,00,00,000/-. The reason for the increase of threshold is to prevent triggering of insolvency proceedings against...

The Union Finance Minister of India has on March 24, 2020 notified in the official gazette that the threshold for triggering insolvency proceedings under the Insolvency and Bankruptcy Code, 2016 ("Code") stands increased with immediate effect from Rs.1,00,000/- to Rs.1,00,00,000/-.

The reason for the increase of threshold is to prevent triggering of insolvency proceedings against the Micro, Small and Medium Enterprises ("MSME") which are currently facing the heat of coronavirus pandemic. Union Ministry has increased the threshold limit to save a lot of businesses which are already facing a threat of default. This action will safeguard an economic meltdown by avoiding large scale insolvencies. 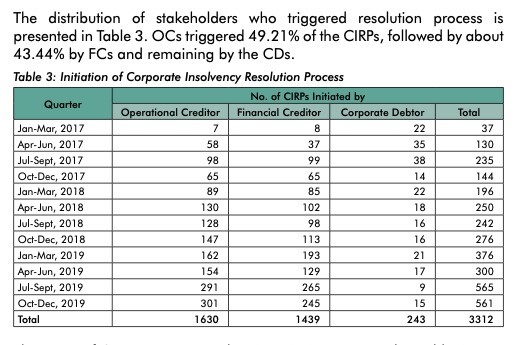 After the increment in the threshold limit, the Operational Creditors/Financial Creditors having claim less than 1,00,00,000/- will be estopped from triggering insolvency proceedings under the Code leaving the Creditors high and dry. Hence, such Creditors will now have to adopt remedies available under the MSME Act, file Summary Suits and/or Regular Suits for recovery of the outstanding payment by obtaining a money decree in alternate to the remedies under the Code. Moreover, amidst the financial distress faced by the enterprises due to Corona pandemic, the Government of India has proposed to introduce Section 10A under the Code, with the objective of suspending Section 7, Section 9 and Section 10 of the Code which deal with initiation of Corporate Insolvency Resolution Process (CIRP). The suspension of these sections will bar the Financial Creditors, the Operational Creditors and a Corporate Applicant seeking initiation of CIRP for a period of six months, but not exceeding twelve months.

According to the Rules under the Code, even if a petition filed by the Operational Creditor is admitted against the Corporate Debtor, the Operational Creditor cannot participate in the Committee of Creditors. As a result, the right to vote over matters of CIRP is confined to the Financial Creditors of the Debtor. On contrary, in context with the Companies Act, 2013 as per scheme of arrangement or compromise provided under Section 230(1), the Tribunal may order a meeting of the creditors or class of creditors, or of the members or class of members, as the case may be, and such meeting to be conducted in a manner as directed by the Tribunal. Thus, 'creditor' and every class of creditor i.e. unsecured, secured, statutory creditors, comes under the purview of Section 230 of the Companies Act, 2013 to arrive at a compromise with the Debtor.

To aid the industries to run their businesses, the Hon'ble Prime Minister of India announced a stimulus package of Rs.20 lakh crores out of which Rs.3 lakh crore will be given to enterprises as collateral-free automatic loan. It is anticipated that such a financial package will benefit around 45 lakh small businesses. The loan will have a tenure of 4 years alongwith a moratorium period of 12 months.

In addition to increment of the threshold limit for triggering the insolvency proceedings under the Code, on May 13, 2020, in view to protect the industries, the Union Finance Ministry of India enlarged the definition of MSMEs by revising the investment limit on the machinery and the turnover. This revision will give enterprises a larger scope to stay protected from defaulting and avail the benefits of the stimulus package. Appended table demonstrates the existing and revised definitions of MSMEs. 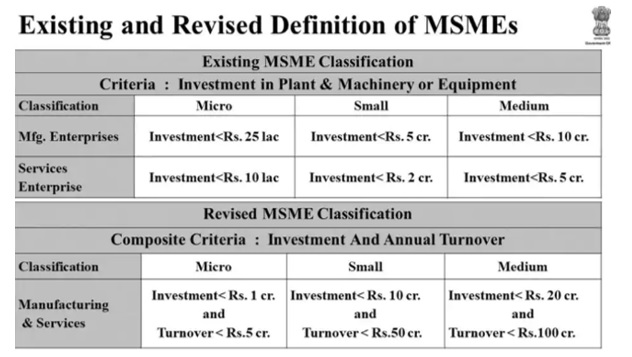 In a scenario, where the Operational Creditor wants to recover its money, the Operational Creditor can make a reference under the MSME Act, 2006. As per section 15 of the MSME Act, the Debtor must make payment before the agreed time. In case of absence of such agreement, the Debtor must pay within 45 days from receipt of the goods and services. On failure to make the payment, the Debtor is liable to pay compound interest at three times the bank lending rate notified by Reserve Bank of India as per section 16 of the MSME Act. If the Debtor does not honor the payment against the goods and services supplied by the Operational Creditor, as per the Section 18 of the MSME Act, a reference can be made to the Micro and Small Enterprise Facilitation Council (MSEFC) in the prescribed form and it shall be decided within 90 days from the date of making such a reference. Therefore, this makes the adjudication process under the MSEFC, a speedy remedy for recovery of outstanding payment.

Now, one should be aware about the Adjudication procedure under the MSME Act:

Once a matter is referred to the MSEFC, online intimation is given to both parties. A chance for mutual settlement through conciliation. On failure of conciliation process, the MSEFC determines if the matter is to be continued as a case or to be rejected. If accepted as a case, it is referred to arbitration. MSEFC gives a final and binding award. The award is to be communicated to Interim Resolution Professional and Hon'ble National Company Law Tribunal (NCLT) during insolvency procedure, wherein the award holder is treated as a secured debtor. It is interesting that the award can also be made against foreign buyer, which is binding and enforceable. The execution of the award is as per provisions of Arbitration and Conciliation Act, 1996. As per Section 19 of MSME Act, the MSME Act provides stringent measures against the defaulter where the defaulter cannot appeal against the award unless the appellant deposits at least 75% of the award before filing an appeal. As per Section 28 of the MSME Act, the offences of the defaulter shall be tried by the Metropolitan Magistrate or Magistrate of First Class or courts of higher hierarchy.

Therefore, because of stringent measures under the MSME Act, there are several benefits under the MSME Act which provides faster and most affordable process for the MSME-vendors. Operational Creditors are the most beneficial as MSME-vendors. One can file cases through online portal – MSME SAMADHAAN. The total amount due along with interest accrued during the period can be obtained without limiting to the Resolution plan and liquidation amount which cannot be availed under the Code. MSME can check the status through online portal. Moreover, under section 23 of the MSME Act, any interest paid by the defaulter to the applicant is not computed as income and is allowed as deduction.