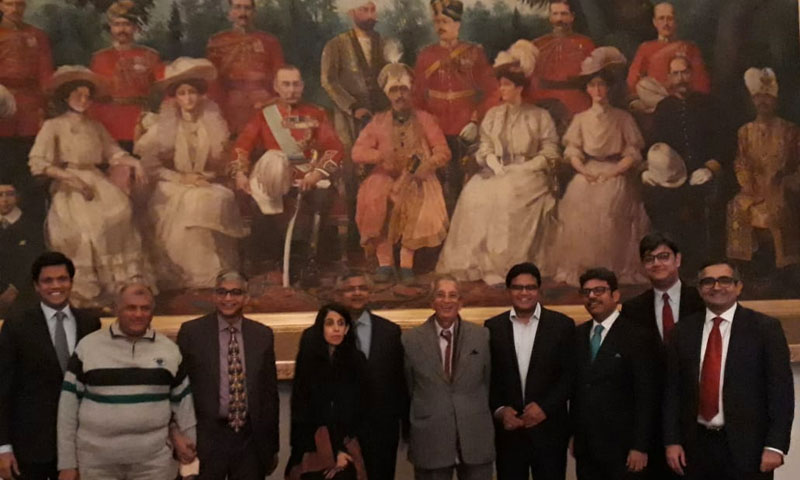 In present lockdown, one of the most dreaded thing can be loss of a dear one and inability to be part of last journey. We are able to share only online the grief of demise of Ashok Desai who commanded respect, awe and love in and outside chamber. To me Ashok Bhai has been a mentor in true sense of a...

In present lockdown, one of the most dreaded thing can be loss of a dear one and inability to be part of last journey. We are able to share only online the grief of demise of Ashok Desai who commanded respect, awe and love in and outside chamber. To me Ashok Bhai has been a mentor in true sense of a Guru in Indian tradition

A true renaissance man with lots of love outside law for literature, art, music and finer things of life, an ajaatshatru rich with friends in all walks of life, a playful company with love to dine out and childlike curiosity to learn new technology. As I recall enduring image of Ashok Bhai all this hidden in a naughty smile with a subtle wink of a tall person having sharp eyes and aquiline nose. This unique smile covered genuine love and deep understanding for frailties of fellow beings, human situations and all that 88+ years of life offered to this distinguished Senior Advocate, former Solicitor General(1989-90) and later on Attorney General for India(1996-98).

As law student in Government Law College at Bombay, same alma-mater as Ashok Bhai, I first heard of him as finest public spirited lawyer leading crusade for civil liberties and against institutionalized corruption in discretionary allocation of cement in Bombay. In those days, it was a big legal fiat to expose a powerful politician through not so known idea of public interest litigation. A friendship with his son Harsh Desai allowed me hospitality of his elegant house and Suvarna Auntie, though I could not personally meet as student this very busy sought-after celebrity lawyer of Bombay High Court. After joining the Bar, I saw Ashok Bhai in action but only to admire with no opportunity to assist.

It was one of the providential coincidence for me that Ashok Bhai came to Delhi as Solicitor General of India immediately after I shifted here. So began my lifelong association with him both in and outside law which continued in his days as Attorney General and thriving private practice thereafter. The matters of moment like Sardar Sarovar Dam,Vineet Naraian, trials of former prime minister PV Narasimha Rao, Fodder scam, Armed Forces Deployment in Disturbed Areas, Presidential Rule in UP, election cases of Sharad Pawar are few of the heavy legal battles to recall. The range of knowledge, cases dealt with and work done by Ashok Bhai covered vast range of subjects in civil, criminal, constitutional and international laws in matters of Salwa Jadum, Foreigners in Assam, 377, domestic and international arbitrations to criminal liability of directors of Union Carbide to complicated tax disputes.

Apart from eminence as jurist, Ashok Desai as Padam Bhushan awardee, would also be remembered as public intellectual for nuanced views on socio-political issues placed with polite firmness – a virtue not in vogue in these polarized times of rancorous debates. There were judicial dignitaries to host, numerable organizations to head, papers to read, books to write and TV debates to enlighten. All with style, conviction, academic rigor and ease of lightness.

One of the summer vacations Ashok Bhai decided to work on appeals against elections of the Shiv Sena leaders on Hindutva plank to be argued on reopening. It was commitment to cause that for this pro-bono group of cases, he returned several lucrative briefs including from one MNC bank which had recently come to India and offered double the fee on condition that all their matters be attended on priority. This was declined in finest traditions of a counsel who valued professional independence more than turnover. However, we as juniors were paid full fees as only his services were pro-bono.

On my designation as Senior Advocate by Supreme Court of India, Ashok Bhai hosted a celebratory dinner attended by luminaries of the bar. I disclosed that I have been the only desi-educated non-barrister junior of Ashok Bhai but never treated less than a barrister. I lived up as supposed barrister drawing strength from his oft quoted dictum about self-opinionated judges, pompous opponents and unreasonable litigants that "There is no law against having high opinion of yourself!" It was magnanimity of his mind and heart that juniors were allowed to speak out of turn our raw thoughts. For our bad points there was always a smile to learn under him only with joy and no stress.

In the end, Ashok Bhai passed away like an enlightened Buddhist soul early in the morning in Ram Mahal at Mumbai in midst of lockdown. We feel deprived of the dignity of grand last journey he deserved. Maybe he would have preferred his last rites in this quiet detached manner only. Maybe nature has conspired to overrule our wishes for vain externalities with crowd and fanfare he never liked. A point again made with that naughty smile of this great soul!