How Far Are We From Gender-Responsive Lawmaking?

In his seminal work, A Theory of Justice, the American philosopher John Rawls imagines parties to a social contract inventing principles of justice that not are morally motivated. This initial situation he called the "the veil of ignorance", one that renders them ignorant of facts about themselves thereby leading to impartial policies, that reiterates his theory of justice as fairness....

In his seminal work, A Theory of Justice, the American philosopher John Rawls imagines parties to a social contract inventing principles of justice that not are morally motivated. This initial situation he called the "the veil of ignorance", one that renders them ignorant of facts about themselves thereby leading to impartial policies, that reiterates his theory of justice as fairness. The veil here signifies a blindfold that deprives law-makers from making oppressive laws that may exploit the disadvantaged. Simply put, some information (and the deliberate specificity of facts) is not morally relevant to principles of justice. For the purpose of our discussion, let us limit this specific fact to gender and follow the Rawlsian hypothesis that law-makers are mutually disinterested in such facts. When we set aside these facts about social circumstances and decide only on the basis of historical and general circumstances about ourselves, Rawls says, we will inevitably formulate self- righteous, risk-averse laws.

If we knew we would end up facing the worst consequences of the laws we propound, we may be inclined to ameliorate the worst outcome and make it as good as can be. In the context of law on martial rape, if we were to pierce this veil, the impetus is to safeguard a marriage in its present patriarchal structure and maintain status quo. This translates to freezing a system because of how it has always been, the purpose it serves and the order of norms it caters to. Just because a statutory provision has been ratified and integrated into a country's domestic penal code does not make it just or valid. This flaw can be attributed to a lack of parity for the minority affected by this provision, just as Rawls had imagined.

At the risk of a seeming oversimplification, rape, in essence, is an expression of power — an act of violence emanating from a perverse sense of entitlement and ownership over a woman's body. And, yet, the Indian Penal Code (IPC) differentiates between rape that occurs within the institution of marriage and that outside of it. The label given to sex without a woman's consent is contingent on her marital status. It is prudent to mention that, from a jurisprudential perspective, the law does not recognise marital rape or sexual violence by a spouse/intimate partner to fall within the purview of rape. In effect, this exception is a nod to the four walls of marriage (the oft-mentioned chaar-diwari) that disregards the very notion of consent.

One of the most popular arguments advanced in opposition to criminalising marital rape is the value in preserving the sanctity of a marriage. Pulling the curtain on this, it is apparent that the Legislature has set up multiple fronts of institutional interference in a marriage. Jurists have often questioned the role of State in a marriage between two consenting adults. If we look closely at the trends of statutory interference in a marriage, the arbitrariness of state's discretion stands out. Here, I refer to 'discretion' by the State (in drafting) and the courts (in decreeing), which is in direct contrast with the "voice and choice" framework. The reason I say this is that the State often adopts a selective method when concerned with the institution of marriage. A prime example of this is a decree of Restitution of Conjugal Rights (RCR). A subset of Indian matrimonial laws, section 9 of the Hindu Marriage Act empowers a court to decree an unwilling spouse to co-habit with the other on grounds of desertion. Hence the law in India sanctifies the right to consortium but not right to bodily integrity and privacy over one's body.

Women and girls have been silent sufferers of that ugly facet of our reality that has only now come to be termed as a 'shadow pandemic'. Spousal violence is defined as physical and/or sexual violence and it is a globally accepted fact that women have been disproportionately affected by the pandemic. Between March-September 2020, 4350 complaints were registered with the National Commission of Women (NCW) with respect to Domestic Violence and a total of 13,410 complaints were registered/received by NCW related to "crime against women and deprivation of their rights". National Family Health Survey-5 data shows married women, between the ages of 18-49, to have experienced spousal violence, has increased from 20.6% in 2014-15 to 44.5% in 2019-2021. It is pertinent to mention that these statistics may be inaccurate presumably due to factors such as under-reporting, the assault occurring in intimate spaces and by the same person. 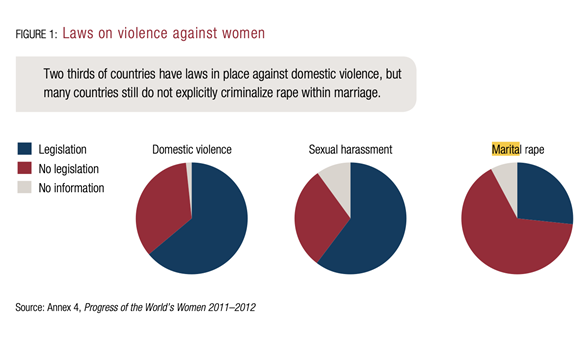 In August 2021, the Chattisgarh High Court ruled that sexual intercourse or any sexual act by a husband with his legally wedded wife is not rape. At the same time, Kerala High Court made marital rape a valid ground for divorce. The latter judgement goes on to say that "Treating wife's body as something owing to the husband and committing sexual act against her will is marital rape". In its 58th session in 2014, the CEDAW (Convention on the Elimination of All Forms of Discrimination Against Women) Committee had urged India to establish a legal framework to criminalise marital rape to depict realities of sexual abuse experienced by women and girls. By 2019, 150 countries have criminalised marital rape; India is not one of them.

Tracing the figures provided by NFHS- 4 , it is plain that 4% women (of the meagre percentage of women who report said assault) were forced into sexual intercourse by their husbands without consent of the former, 2.1 % were forced to perform sexual acts they did not want to, and 3% were threatened to make them perform sexual acts that they did not wish to perform. In the aftermath of the Delhi gang-rape of 2012 that shook the nation, an independent committee was constituted to suggest amendments to the criminal law. The Verma Committee recommended that the exception for marital rape be removed and opined that merely because the accused and victim are married or in an intimate relationship may be disregarded as a mitigating factor.

Evidence suggests that the global cost of violence against women stands at approximately USD 1.5 trillion. India is a signatory to CEDAW, having ratified it as early as in 1993. Hence, India is bound by its obligation arising from the convention to prioritise elimination of all forms of gender-based violence against women. This specifically includes Article 15 clause 1(equality before the law) and Article 16 (measures to eliminate discrimination against women in all matters relating to marriage and family relations) of the Convention. It is here that section 375 of the IPC that carves out an exception for marital rape falls within the purview of the aforementioned Articles. Within the margin for State discretion, a substantive provision of the Indian Criminal Code actively discriminates against women and infringes their right to access justice.

Enacted in 1860, perhaps the time has come to amend this section of the IPC that provides blanket immunity for perpetrators of marital rape. Earlier this week, Gujarat High Court issued notice in a plea challenging the constitutionality of Exception 2 to Section 375 of the IPC. This writ petition challenges the constitutionality of Exception 2 to Section 375 of the IPC for being arbitrary, unreasonable and violative of Articles 14, 15, 19 and 21 of the Constitution of India. Not purely on grounds of being obsolete but also on the basis of the seven decades Indian women have survived under laws traditionally made by men for men, excluding women's voices on laws that impact their lives makes little sense. The question that arises at this juncture is: Why is it important to work towards social norm-changing in an effort to make this the decade of gender responsive laws? By definition, gender-responsive law-making is enacting laws that affirm the gender-equality principle and guarantee it in practice. Though we must also remember that any welfare provision is always open to misuse as has been seen in some cases of section 498A of the IPC.

By criminalising marital rape, India will mark a giant stride in the struggle for gender justice. But that is not all, women must also be active contributors in laying the groundwork for policies that concern them. Following the logic behind the Rawslian hypothesis for justice as fairness, we have to believe that representation is as crucial as impartiality. This is the part of our work that will augment the pace of change by having in place punitive measures for spousal violence. We must seize the moment to make this the decade of gender-responsive law making.

Aaliya Waziri is a lawyer at the High Court of Delhi, India, presently working as International Consultant (Women, Peace and Security) with UN Women Office for Timor Leste. She also serves as Consulting Editor for Grin Media Pvt. Ltd.