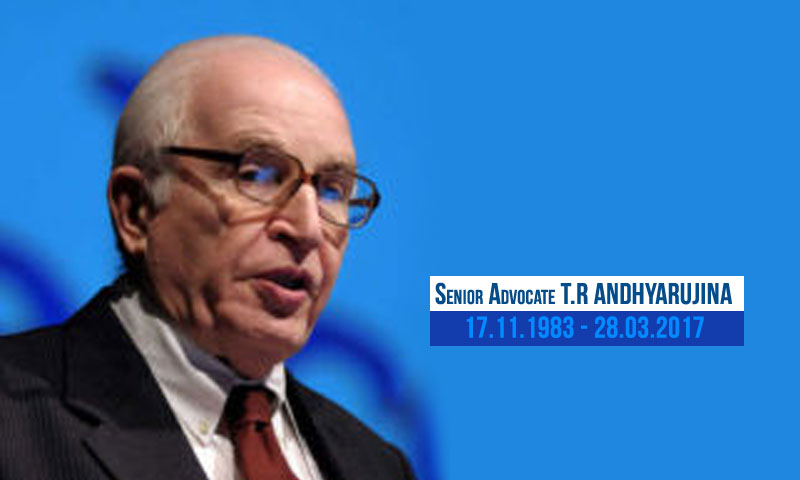 x
"A gentleman is one who puts more into the world than he takes out." -George Bernard Shaw

It is perhaps tad unusual when a law student writes a tribute for doyen of the bar he has never met or had an interaction with, especially when that tribute is written on the death anniversary. Tehmtan R. Andhyarujina or TRA or "Tehmtan" as he was popularly known in legal circles, left for his heavenly abode three years ago on March 28, 2017. Apart from law, English literature and...

It is perhaps tad unusual when a law student writes a tribute for doyen of the bar he has never met or had an interaction with, especially when that tribute is written on the death anniversary. Tehmtan R. Andhyarujina or TRA or "Tehmtan" as he was popularly known in legal circles, left for his heavenly abode three years ago on March 28, 2017. Apart from law, English literature and Western classical music occupied his time!

Quite feasibly, 2017 will be remembered as the most mournful year in the history of the Supreme Court Bar as they lost many stalwarts in a chronology starting from their former President MN Krishnamani, leading to Anil Divan, TR Andhyarujina and PP Rao. In fact one can even argue that the institutional crisis which the Supreme Court of India started facing from early 2018 to the present point in time could had been resolved amicably had these four great men been alive and walking in the corridors of the resplendent building occupying space at Bhagwan Das Road, New Delhi.

A cardinal rule followed since ages while writing a tribute for a luminary after his passing is to follow Shakespearian adage of:[2] "Speak me fair in death". But when one recalls TRA, there won't be any need for ensuring compliance with the Shakespearian adage as the TRA's legacy and personality are legendary. To summarize the personality of TRA, one can quote Senior Advocate Jamshed P Cama, "I remember him as a soft spoken gentle person."

Despite cracking the cut-throat civil services exam to join the prestigious Indian Foreign Service, TRA had a change of heart and opted for a career in law by joining the chambers of the legendary senior lawyer HM Seervai. Had destiny taken place other way round the Government of India would have got a very good diplomat but would have lost its finest advocate in the courts of law! True to the training he received from his legal mentor HM Seervai, he was a conservative constitutionalist who rooted for originalism over evolutionary methods of interpreting the constitution.

Apart from his appearances in the court firstly as a junior to HM Seervai and later while defending various legislations during his term firstly as an Advocate General of Maharashtra and later as the Solicitor General of India, his commitment to conservative constitutionalism was fully clear. He was designated as a Senior Advocate on December 11, 1979.

His most seminal contribution to the development of conservative constitutionalism through scholarship was his book "The Kesavananda Bharati Case: The untold story of struggle for supremacy by Supreme Court and Parliament" which was launched in 2011 by the then Chief Justice of India late SH Kapadia. In fact, the politically heated arguments of this case even spoilt the amity between two leading senior counsels for opposite sides – Nani Palkhivala and HM Seervai over quoting one's stance in their legal work and contradicting it with their stance in the court. However, it was TRA who still maintained good relations with everyone who appeared due to his cordial nature.

Apart from his landmark book on discussing the political nature of the proceedings of Kesavananda Bharti case, he also long back wrote entitled Judicial Activism and Constitutional Democracy in India in 1992 and Judges and Judicial Accountability in 2002. The prowess of his written work can be seen by the fact that Senior Advocate Arvind P. Datar who is inclined in favour of basic structure doctrine has acknowledged and referred to both academic and legal contributions of TRA in the Kesavananda Bharti case[3] in his plethora of oeuvres about the contributions of Palkhivala in our jurisprudence.

In the two of the most recent landmark judgments of judicial activism viz. – Vishaka v. State of Rajasthan[4] relating to sexual harassment of women in the workplace and SCAORA v. Union of India[5] also known as the fourth judges case relating to declaring NJAC as unconstitutional, it was TR Andhyarujina who consistently lent his services for the state to minimize judicial activism without any compromise with the principles of distributive justice and Parliamentary sovereignty. It was TRA who long ago recognized the fault lines with the Collegium System owing to his far-sightedness even though other jurists were favouring it due to the anti-executive wave generated after some political judicial appointments made by the then Law Minister, Late HR Bharadwaj.

Rest in peace respected TRA! May your work continue to inspire a legion of lawyers and legal scholars in future especially in their contribution to conservative constitutionalism.

Even though 2020 has come as a tough year for many due to the present COVid-19 crisis but I am sure this year will be remembered in fulfilling your wish of seeing your illustrious son Zal Andhyarujina being designated as a Senior Advocate. Any discourse on the basic structure doctrine, judicial activism, parliamentary sovereignty or constitutional conservatism in India can hardly take place without reference to you! Following words of the late justice of the Supreme Court of the US hark back to your contribution in developing the jurisprudence of conservative constitutionalism in India aptly:

"I try to be an honest originalist! I will take the bitter with the sweet!"

[1] The author is a final year student of law at OP Jindal Global University. The author expresses his sincere thanks to Ms. Ramni Taneja for inspiring him to write this tribute, editing it and sharing her experiences of briefing him ever since his days in the Bombay High Court and in the Supreme Court of India.