Challenge Against The Citizenship (Amendment) Act : Beyond The Basic Arguments 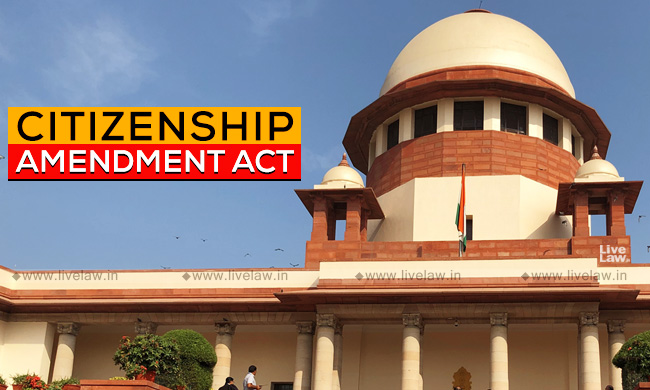 Thus far, the constitutional debate around the Citizenship (Amendment) Act has been framed around the following arguments: (a) does the grant of immunity and citizenship to a select group of migrants violate the principle of "reasonable classification" under Article 14, by virtue of the individuals and groups it excludes?; (b) does the selection of groups lack any "determining principle", and...

Thus far, the constitutional debate around the Citizenship (Amendment) Act has been framed around the following arguments: (a) does the grant of immunity and citizenship to a select group of migrants violate the principle of "reasonable classification" under Article 14, by virtue of the individuals and groups it excludes?; (b) does the selection of groups lack any "determining principle", and is therefore unconstitutionally arbitrary?; and (c) by privileging religious persecution over other forms of persecution in claims to citizenship, does the CAA violate the basic feature of "secularism"?

In this post, I attempt to move beyond these basic arguments which have – by now – run their course in the public sphere. Beyond reasonable classification, arbitrariness, and secularism, I will suggest that there are deeper reasons to hold the CAA unconstitutional. As it will become clear, a closer engagement with these reasons will require us to rethink some of our long-held assumptions about Indian constitutional law. As I shall argue, however, these are not radical or off the wall arguments, but rather, implicit within constitutional practice. I shall argue, first, that the principle of equality under the Indian Constitution has moved beyond the classification and arbitrariness tests (as I have argued before); secondly, that – contrary to a widespread assumption in our legal culture – citizenship laws deserve greater judicial scrutiny instead of judicial deference; and thirdly, that notwithstanding the language of Article 11 of the Constitution, there exist implied limitations upon Parliament's power to confer or withdraw citizenship – limitations that flow from the existence of equally important and fundamental constitutional principles.

The Evolving Idea of Equality

In the 1950s, heavily influenced by American jurisprudence, the Indian Supreme Court adopted the "classification test" for determining violations of the guarantee of equal treatment under Article 14. The "classification test", as everyone knows, required that in order for a law to pass Article 14 scrutiny, there must exist (a) an intelligible differentia between the individuals or groups that are subjected to differential treatment, and (b) a rational nexus between that differentia and the State's purpose in framing the law. Right from the beginning, however, there was a dissenting tradition at the Supreme Court that recognised this approach to be excessively formalistic and constrained. In Anwar Ali Sarkar, for example, Vivian Bose J. asked what "substantially equal treatment" might mean in "the democracy of the kind we have proclaimed ourselves to be." As Bose J. understood at the time, equality could not be divorced from more fundamental ideas about democracy and republicanism.

In the coming years, the Supreme Court made various attempts to break out of the shackles of the classification framework. For example, it evolved the "arbitrariness" standard – which is, only now, being given flesh and bones, in some of the recent judgments of Nariman J. It also held that the State "purpose" would have to be "legitimate" – i.e., it added a third, more substantive, prong to the classification test. The real breakthrough came, however, with the 2018 judgments in Navtej Johar and Joseph Shine. In reading down Section 377 and 499 of the Indian Penal Code, Constitution Benches of the Supreme Court advanced a richer and more substantive vision of equality, that was also in line with global best practices. In short, the Supreme Court shifted the focus from "reasonable classification" to the idea of disadvantage. True equality – as we can intuitively sense – is about identifying disadvantage, about identifying the axes of diadvantage, and then working to remedy them.

To recognise and identify disadvantage, however, the law requires proxies. It is here that the observations of Indu Malhotra J., for example – as highlighted in a previous post – become important. As a shorthand for identifying disadvantage, constitutional courts all over the world have asked whether legislation picks out people on the bases of "personal characteristics" that they (a) have no control over, (b) are powerless to change, or can only change at great personal cost. Take, for example, the idea of "race": a person does not choose the race into which they are born, and cannot – obviously – change their race in any meaningful way. Laws that pick out people on the bases of race for differential treatment, therefore, presumptively violate the principle of equality (unless, of course, they are designed to remedy racial disadvantage, through affirmative action programmes, for example).

It is this richer and more substantive vision of equality and equal treatment that demonstrates the unconstitutionality of the CAA in starkest terms. Each of the three "conditions" under the CAA – country of origin, religion, and date of entry into India – are effectively beyond the control of the individuals the law is targeted at. A person cannot choose which country they were born in, which religious community they were born into, and when persecution forced them to flee into India. But the CAA takes the category of migrants living in India and divides them precisely on these three bases. This is why it goes against the basic tenets of equality.

Citizenship Laws and Standards of Review

Another common argument that is invoked by the defenders of the CAA is that issues of citizenship and migration are firmly within the domain of sovereign State powers, and the scope of judicial intervention is highly limited. Courts must – or so the argument goes – defer to the State's decision regarding who will be granted citizenship, and how. This argument has been repeated so often over the years, and so frequently, that it has by now acquired the immovable weight of a mountain. But the most cursory examination will reveal, however, that this mountain is made of straw.

Let's go back to the basics. What was the original justification of judicial review in a democratic society? What justified an unelected Court striking down laws passed by democratically-elected legislatures? The answer, of course, was that the primary role of the Court was that of a counter-majoritarian institution. It existed to check the excesses of majoritarianism, on the understanding that true democracy meant something more than brute majority rule. For this reason, in its famous Carolene Products footnote, the US Supreme Court noted that the role of the Court was particularly important in cases involving "discrete and insular minorities." Why? Because it were these minorities that faced the greatest difficulties in articulating their interests through the normal channels of (majoritarian) democratic governance. The task of the Court, essentially, was to come to the rescue of those whom the political process – formally or effectively – excluded from equal participation. Thus, for instance, if there is a country where same-sex relations are viewed with opprobrium by a large segment of the population – to the extent that the LGBTQ+ community is permanently excluded from access to political power, as nobody else will ally with them – the Court is justified in subjecting laws targeting that community to stringent scrutiny.

It should be obvious that migrants – or refugees, as the case may be – fall squarely within this category. As they cannot vote, they are formally excluded from participation in the political process. More than any other vulnerable or marginalised group in the country, they have no say in the laws and policies that will impact them. For this reason, laws that affect citizenship status in the manner that the CAA does, must be subjected to the highest threshold of judicial scrutiny, rather than the lowest.

In a constitutional democracy, no power is absolute. Constitutional authorities are established by – and owe their existence to – the Constitution, and the powers they exercise flow from that same Constitution. In some cases, these powers are limited in express terms. For example, Article 13 of the Constitution expressly limits Parliament's power of law-making by making it subject to the fundamental rights chapter.

Article 11 of the Constitution – that deals with citizenship – contains no such express limitation. It gives to Parliament the right to "regulate citizenship by law", and allows Parliament to make "any" provision with respect to acquisition and termination of citizenship, and "all other matters" relating to citizenship. Commentators have pointed to the width of these words to argue that in matters of citizenship, Parliament has virtually unlimited power (apart from the usual touchstone of the fundamental rights chapter).

What this argument ignores, however, is that express limitations are not the only manner in which constitutional authorities are constrained. As noted in Kesavananda Bharati, there also exist implied limitations that flow from the structure of the Constitution. When – and how – do we discern implied limitations? For the purposes of this post, a short answer will suffice: power under the Constitution to do "x" is limited at the point at which doing "x" will frustrate or destroy another, equally important constitutional principle. This principle was most recently reiterated by the UK Supreme Court in Miller v The Prime Minister, where the British Prime Minister's power to "prorogue" Parliament was held to be limited by the constitutional principle of representative democracy, according to which it was Parliament's function to scrutinise and debate important legislation. It was found that the Prime Minister's prorogation – just before the deadline for Brexit – had the effect of denying Parliament an adequate opportunity to debate the proposed EU Withdrawal Bill, and was therefore unconstitutional.

What is the implied limitation in the present case? The answer is the constitutional principle of secularism. Secularism – as Kesavananda Bharati held – is a basic feature of the Indian Constitution (independent of its subsequent insertion into the Preamble during Indira Gandhi's Emergency). The Indian Constitution commits us to being a secular polity. The key issue, then, is that can the conditions of entry into the polity (determined by citizenship law) be such that they frustrate the character of the polity itself. The answer, obviously, is no. In other words, therefore, there is an implied limitation upon the power under Article 11 to grant or withdraw citizenship, that does not permit Parliament to pass any such law that would negate the secular character of the polity – in this case, through the backdoor, by creating conditions of entry where religious claims become determinants of citizenship. To put it in a single sentence: the principle of secularism acts as an implied limitation upon Parliament's power to legislate on citizenship. Parliament, therefore, has all powers to prescribe conditions of citizenship except and insofar as such conditions frustrate the Constitutional commitment towards preserving a secular polity.

Sterile debates over "reasonable classification", "rational nexus", and "sovereign powers" can only take us so far. More than that, they serve as conceptual prisons that stop us from thinking more deeply about the idea of equality, the link between equality and democracy, and what the Constitution really asks of us. In recent years, Indian constitutional jurisprudence has begun to liberate itself from that conceptual prison, and has articulated a richer vision of equality and democracy. The CAA challenge now gives the Supreme Court an opportunity to further develop – and evolve – that jurisprudence.

Gautam Bhatia is a Delhi based Lawyer. This article was first published in his blog Indian Constitutional Law and Philosophy. You can read the Original Here

[Disclaimer: the author is involved in two of the petitions challenging the constitutionality of the CAA]