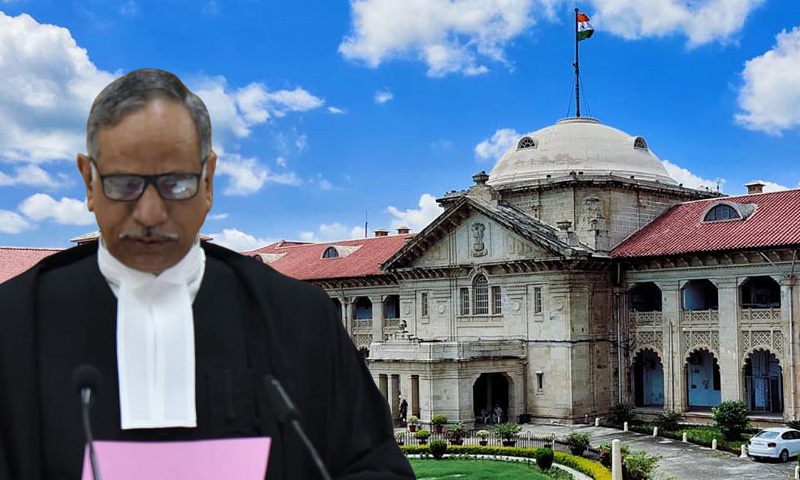 With the resounding verdict against the preventive detention of Dr. Kafeel Khan, which was greeted with jubilation by all those who stand for civil liberties and rule of law, Chief Justice Govind Mathur of the Allahabad High Court marked himself as an unfailing defender of the citizens' fundamental rights.In fact, Kafeel Khan's judgment is the last in the latest in the series of several...

With the resounding verdict against the preventive detention of Dr. Kafeel Khan, which was greeted with jubilation by all those who stand for civil liberties and rule of law, Chief Justice Govind Mathur of the Allahabad High Court marked himself as an unfailing defender of the citizens' fundamental rights.

In fact, Kafeel Khan's judgment is the last in the latest in the series of several recent judicial interventions made by Chief Justice Mathur whereby executive actions were questioned on the touchstone of constitutional guarantees.

Here is a list of recent significant judgments passed by chief Justice Mathur.

In January this year, a Division Bench led by Chief Justice Mathur ordered inquiry into alleged police excesses at the Aligarh Muslim University, during protests against the current Government's pilot project, the Citizenship Amendment Act.

Terming the incident to be a 'human rights violation' the Court had stated,

It thus constituted a six-member team of the NHRC, which recommended that action must be taken against the delinquent policemen in accordance with the law apart from compensating the injured students.

Accordingly, the Court directed the Director General of Police of the UP Government to identify and take action against the errant policemen. A direction was also made to sensitize the police force and to impart special training so as to inculcate "professionalism" in handling such situations.

The order came as a huge relief to students who were not only subjected to unwarranted brutality at the hands of executive but were also being projected as anti-nationals for raising a voice of dissent.

In March, Justice Mathur's bench was prompt in safeguarding the fundamental right to privacy of individuals allegedly involved in violence during anti-CAA protests, whose photos and personal details were published by the UP Govt in its infamous "Name & Shame Banners".

Soon after the banners appeared in prominent city centres, with the names, photographs and addresses of the accused, Chief Justice took suo moto cognizance of the issue and held a special sitting on a Sunday to deal with it.  After an eventful hearing session, the High Court observed that the Government action had an "injurious effect" on the precious rights enshrined under the Constitution and that the Courts cannot "shut its eyes" if a public unjust is happening just before it.

These remarks later resonated in Justice Mathur's message on the occasion of 129th anniversary of Dr B R Ambedkar, the chief architect of Indian Constitution. He said,

"Being member of the judicial fraternity, the responsibility lies in higher degree on our shoulders to ensure promotion and protection of all constitutional ideals and values. These values are not meant to be adhered by state only, but these must be the way of our life and in day to day activities of every citizen."

The Court concluded that the UP Govt had failed to show why the personal data of few persons had been placed on banners and it thus amounted to an "unwanted interference" with the citizens' right to privacy.

Undoubtedly, the Name & Shame banners had the effect of fixing liability on individuals without a trial and the High Court made extensive observations against such "colorable exercise of powers" by the Executive.

The State of Uttar Pradesh approached the Supreme Court against the HC verdict. The SC refused to stay the HC verdict but referred the petition to a larger bench.

During the course of the national lockdown, the High Court was alive to the hardships being faced by the weaker end of the society, especially migrant labours. After registering a suo moto PIL on the migrants' issue, the Court ordered that an officer should be appointed over groups of 400 migrants, to keep a regular check on their "health and living conditions".

To ensure that the direction does not remain a mere empty formality, the High Court specifically ordered that such officers shall:

With respect to the migrants who were stranded in other States/ were walking towards their home towns in UP, the Court sought a detailed report on the facilities being provide to them. This direction was in addition to the Standard Operating Protocol issued by the Union Ministry of Home Affairs on movement of stranded workers.

Further, to address the issue on a long term basis, Justice Mathur directed the Government to prepare a scheme for rehabilitation of migrants and to come out with employment layout to reduce migration of the natives of Uttar Pradesh to other parts of the country to earn minimum livelihood.

Pertinently, this direction was passed a month prior to the Central Government's Garib Kalyan Rozgar Abhiyaan which aims at utilizing the migrant labour's skills to boost development in their native villages, while providing them employment.

In its latest stride, the High Court set aside the detention order passed against Gorakhpur-based paediatrician Dr. Kafeel Khan, under the stringent National Security Act, 1980, allegedly for giving a provocative speech during an anti-CAA protest last year. He had been languishing in the Mathura Jail since January 2020.

The High Court rapped the local District Magistrate who had passed the detention order under NSA in February this year, for a 'selective reading' of Khan's speech and selective mention of few phrases from his speech, "ignoring its true intent".

Dr. Khan, who addressed a group of AMU students during protests against the contentious CAA Bill, inter alia, made insinuations against 'Mota Bhai' of promoting communalism instead of humanism.

The High Court observed that Dr. Khan's remarks in fact called for "national integrity and unity among the citizens".

"A complete reading of the speech prima facie does not disclose any effort to promote hatred or violence. It also no where threatens peace and tranquility of the city of Aligarh. The address gives a call for national integrity and unity among the citizens. The speech also deprecates any kind of violence," the High Court observed in a much-celebrated ruling.

It made significant remarks with respect to right to liberty of citizens as reiterated below:

Presently, Justice Mathur's bench is seized with the case of a missing BHU student who allegedly disappeared from the Police Custody in February this year. The Court had taken cognizance of the matter based on a letter petition and had passed relevant orders in the Habeas Corpus plea last month.

It has adopted a stern approach in the matter, mandating personal attendance of concerned Senior Superintendent of Police and rapping the authorities for filing 'vague affidavits'. The matter is to be heard on September 22.

Inter alia, the Court has taken suo moto cognizanceof plight of minor girls in UP's Chitrakoot, allegedly being forced to "trade off" their bodies to survive the lockdown induced financial crisis. The Bench had issued notices to the District Magistrate and Chairman, District Legal Services Authority, Chitrakoot and the matter will be taken up on September 10.

The High Court is also keeping tabs on the steps being taken by the local authorities to prevent the transmission of Covid 19 virus in the state.

The suo moto plea registered by the Bench of Justice Mathur to monitor the conditions of Quarantine Centers in the State, has now been assigned to another Division Bench comprising Justices Siddhartha Varma and Ajit Kumar, to track day to day steps being taken by the local authorities to implement social distancing norms.

Recently, the High Court remarked that somehow because of the Unlock guidelines, people had got a wrong impression that they can freely mix with each other and move around. The Court stressed that "Do gaj doori mask pehna zaroori" shibboleth coined by the Government had to be implemented sternly and in order to protect the people from contracting the deadly virus, the authorities may even incarcerate those who flout the Govt guidelines.

It observed that overcrowding had to be stopped at any cost and even if the same resulted in "kilometers long queues" outside shops, etc., the same would be for the benefit of people themselves.

In its latest orders, the High Court has sought the Government's response about re-imposing Lockdown in the state, so as to check the surge in Covid cases. It remarked,

"Law is meant for the people and if spread of virus COVID-19 can be contained by locking the people inside their homes, let it be, as it will not only save the lives of people in general but even will result in better use of government resources. When we have to balance between bread and butter and life, the latter has to prevail. Food is for life to survive and not vice-versa. We do not think that a lock down for a fortnight would bring the economy of the State to such a halt that people would die of hunger."

Justice Mathur's approach seems to be driven by a solemn faith in the Constitution, which got reflected in a message given by him on the birth anniversary of Dr B R Ambedkar.

"The Constitution of India is not a simple law book or testament for do's and dont's, but a well finished path for socio-economic and political progress of India as a nation and as a federal society of its citizens with adequate freedom to all the stakeholders to protect and promote their healthy traditions and values.

In our day to day life as well as while discharging our official duties we must commit ourselves for the core constitutional values those acquired shape during our freedom struggle and put in words by the Drafting Committee under leadership of Dr. B.R. Ambedkar."