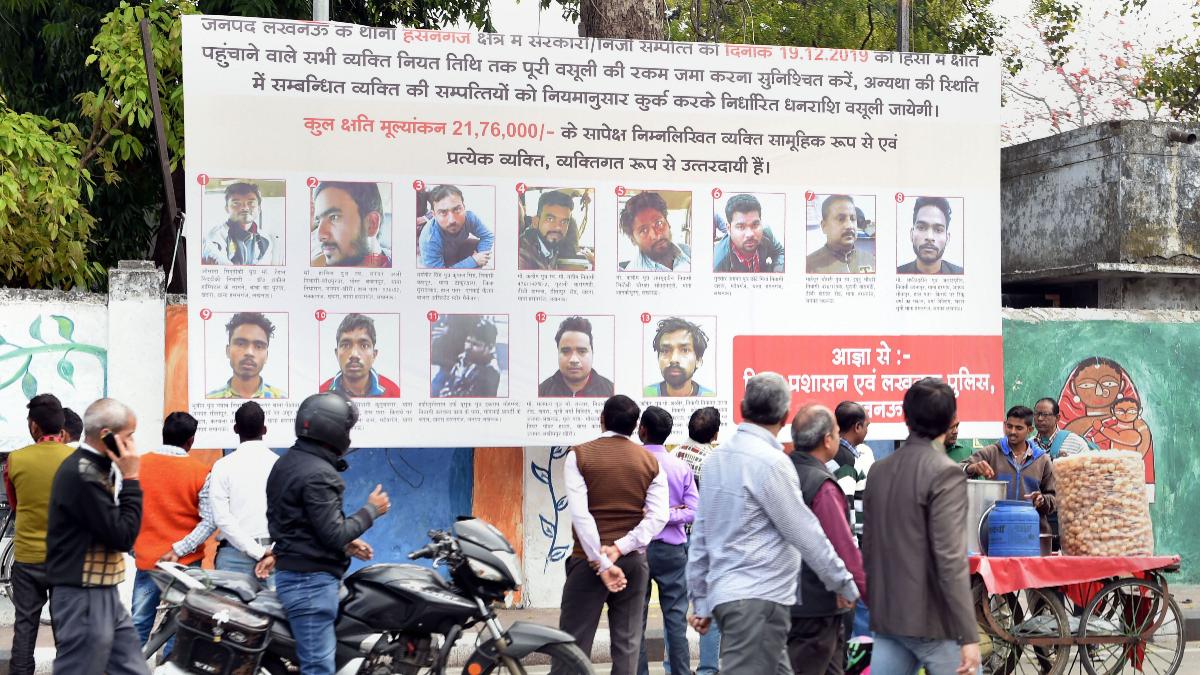 In a severe jolt to Yogi Adityanath-led government of Uttar Pradesh, the Allahahabad High Court on Monday ordered the removal of all posters and banners put up by UP police in Lucknow publishing the names and photos of persons accused of violence during protests against Citizenship Amendment Act.The Court observed that the State action amounted to "unwarranted interference in privacy of...

In a severe jolt to Yogi Adityanath-led government of Uttar Pradesh, the Allahahabad High Court on Monday ordered the removal of all posters and banners put up by UP police in Lucknow publishing the names and photos of persons accused of violence during protests against Citizenship Amendment Act.

The Court observed that the State action amounted to "unwarranted interference in privacy of people" and hence violative of Article 21 of the Constitution.

Taking suo moto cognizance of the news reports of banners and posters in the capital city, a division bench comprising Chief Justice Govind Mathur and Justice Ramesh Sinha decided to hold a special sitting on March 8(Sunday) at 10 AM.

During the hearing on Sunday, the court had orally observed that "good sense should prevail on the State and it should remove the hoardings and apprise the court about this at 3 PM".

The matter was first taken up at 10 AM on Sunday when the bench comprised by Chief Justice Govind Mathur and Justice Ramesh Sinha pulled up state authorities stating that the impugned state action was "highly unjust" and that it was an absolute "encroachment" on personal liberty of the persons concerned.

The matter was the adjourned till 3 PM on Sunday to enable appearance of Advocate General.

At 3 pm, the AG disputed the jurisdiction of the HC stating that the hoardings were put up in Lucknow and therefore the principal seat of the HC did not have any jurisdiction in the matter. He had also submitted that PILs should not be registered to protect those who break the law.

In the judgment passed today, the Court observed :

The Court said that the action of publishing names and photos of accused persons violated the tests of legality, legitimate aim and proportionality on the reasonableness of invasion of right to privacy.

It was found that the action had no support of law, as no statute prescribed such a procedure of 'naming and shaming' of accused persons.

Regarding legitimate aim, it was observed

With respect to the Advocate General's submission that the action was intended as a deterrence effect, the Court observed :

"learned Advocate General failed to satisfy us as to why the personal data of few persons have been placed on banners though in the State of Uttar Pradesh there are lakhs of accused persons who are facing serious allegations pertaining to commission of crimes whose personal details have not been subjected to publicity. As a matter of fact, the  placement of personal data of selected persons reflects colorable exercise of powers by the Executive"

The Lucknow administration had put up hoardings at major cross-sections in the city, with details of about 60 people who have been issued recovery notices for their alleged involvement in violence during CAA protests on December 19, 2019.

A government spokesman said the posters have been up on the Chief Minister Yogi Adityanath's directive at important intersections, including the main crossing in the busy Hazratganj area and in front of the Assembly building.