[Column] 'Fast Tracking Of Cases - State Has The Responsibility In Making Its Citizens Feel Safe': By Anjana Prakash, Senior Advocate 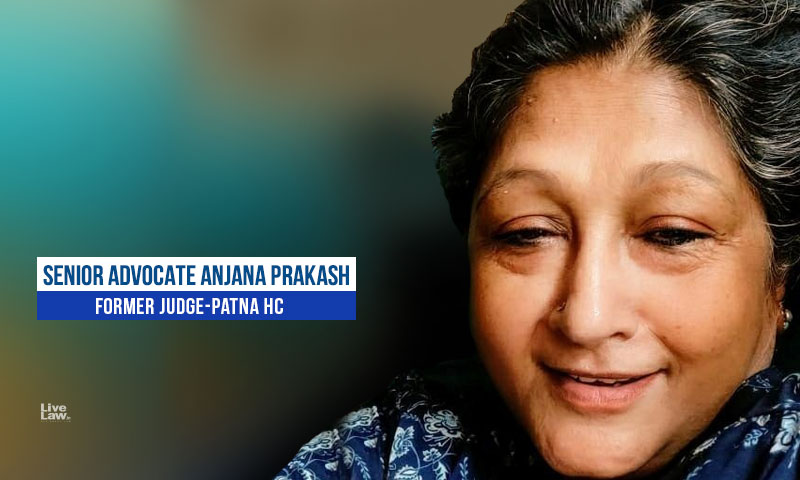 As I understand it, the Indian Penal Code classifies criminal offences broadly into two categories of serious and simple cases, based on the severity of the punishment prescribed for them. Offences such as murder, rape, dacoity tried by judicial officer of the rank of a District Judge are punishable with severe sentences and the rest, triable by a Magistrate prescribe lesser...

As I understand it, the Indian Penal Code classifies criminal offences broadly into two categories of serious and simple cases, based on the severity of the punishment prescribed for them. Offences such as murder, rape, dacoity tried by judicial officer of the rank of a District Judge are punishable with severe sentences and the rest, triable by a Magistrate prescribe lesser sentence. However, some of the so -called simple cases, have the same potentiality to disturb public order as offences punishable under the Arms Act such as, crimes which are a threat to public tranquility, or such offences which are attempts to destabilize the Govt or the Social equations.

When Nitish Kumar became the Chief Minister of Bihar sometime in 2005, (I do not hold his brief), he was saddled with a deteriorating law and order problem, which had made life hell for an average Bihari. Amongst other things, he initiated the idea of fast-tracking cases instituted under the provisions of Arms Act. With the concerted effort of the Patna High Court which red-flagged these cases, the Magistrates took them up on priority. The reason was two-fold; firstly, the visibility of criminals which disrupted the daily humdrum of life was contained thus assuring an average citizen that he was safe and secondly the possibility of petty arms- carrying criminals graduating to committing bigger crimes was thwarted with a speedy trial.

However, this initiative was effective because the investigation and prosecution of cases instituted under the Arms Act happen to be quite uncomplicated. In the sense, all that the police have to do is record the statement of two seizure witnesses, procure the report of Arms expert on the question of efficacy of the seized Arms. This would end the investigation and on such a material trial could start. Usually getting reports from officials, in any matter pending in a court is a cumbersome process but with the State being so pro-active as it was, it was not difficult, and trials proceeded without a hitch with utmost speed.

Thus, in order to improve a situation firstly the State has to assume responsibility of making its citizen feel safe, not for its own political gain, but for the sake of upholding the constitutional obligations. Law and order being in the State list it is the duty of the State to ensure the basic constitutional right of a citizen to reside peacefully is guaranteed and it cannot shirk away and let the goons take over the lives of an average citizen. Secondly, it has to take steps as required and importantly make the effort visible, so it not only assures the citizen, but also deters others from committing similar crimes, which incidentally is one of the objects of punishment. Hence, it is something like saying, 'justice must not only be done but also must be seen to be done'. It is also important to remember that the State is under close scrutiny of an average person, whether it impacts him personally or not, whenever there is a law and order situation. It is so important that the TRP of a Chief Minister to a large extent depends on how well he handles the situation.

I am writing this article is in the context of increase in the number of hate speeches and disturbing videos, which are being circulated for the sole purpose of driving a rift in the Society which are clearly punishable under Sections 153 A,295 A 505 (2) Indian Penal Code. Even though these offences prescribe punishment of only 3 years imprisonment, but in my opinion, they would fall in the category of serious offences because of their adverse effect on the welfare of our Nation. In fact, they are no less lethal than Covid 19 if not more, because while the virus of Covid 19 will infect just a few, this virus will infect one and all, and destroy the oneness of our Society, on which we have claimed so much of pride since ages.

To briefly describe the offences, Section 153 A punishes a person, who by words or otherwise promotes or attempts to promote disharmony in the Society, Section 295 A penalizes any person, who deliberately by words or actions insults any religion and Section 505(2) prescribes that whoever publishes, circulates any statement or report containing rumor or alarming news with intent to cause ill-will amongst members of the society will be punished. Since the ingredients are very straight forward, such offences, like cases under the Arms Act are easy to prove. It is no great task either for the investigating agency to collect material, or the Prosecutor to prove evidence during trial.

As I perceive presently there are three scenarios prevailing in our country- i). when no case is filed, ii). case is filed but accused not identified/arrested so there is no trial iii). when the accused is identified but the investigation is so long drawn that the trial is delayed.

In UP I find no substantive case was filed against the person who circulated a video asking Hindus not to buy vegetables from Muslims. He was no doubt given a rap on his knuckles by his party high command, but he remained unrepentant. In my opinion the inaction on the part of the State indicates that the State clearly does not acknowledge the criminality of such an act even though it is clearly punishable under the aforesaid offences. This is an ominous sign because the State here colludes with an accused, to flout the law, which it is enjoined to implement.

I may point out here that all codified criminal offences are offences against the State and not an individual. So as soon as an offence is committed it is the State, which is affected because the body of allegations are punishable under law formulated by the State. Simply said, all injuries are injuries caused to the State, no matter who the injured is, and it is the State which is the Prosecutor in Court, when a case is instituted upon a police case.

To continue with the narrative I find from various news reports that in the State of Bihar similar kinds of incidents had happened when members of Bajrang dal had tried to distribute saffron flags to Hindu shopkeepers in Nalanda and also posted it on twitter. The BDO Nalanda instituted a criminal case against them after which the twitter account was deleted. This is most certainly heartening news because the State in this situation has acknowledged the problem, but the disheartening news is, that no one was arrested.

Also disheartening is the news that no substantive case was filed against the SSB official posted in Pantoka Ramgarhwa on Indo- Nepal border in West Champaran , when he reported on secret intelligence that some Muslims, who were corona virus positive were crossing over to India from Nepal to infect Indians which information was found to be false. This news was somehow leaked to News 18 to do the desired damage across the country.

The point I am now driving at, is whether in situations where the State has filed cases, it shows it has passed the test of having the will to protect itself and its citizens from the danger of injury. In my opinion, it does not.

The fact that the accused in Nalanda were not arrested shows that the acknowledgment of the problem is half-hearted because merely filing a case is not enough. If the accused is not arrested the final investigation report will not be filed and the trial will not commence. Thus, the whole point of filing the criminal case is lost. In a situation like this instead of the case having a deterrent effect, the signal which will be sent is that nothing happens even if a case is filed, which one can very well argue is worse than not filing a case at all.

Similarly, when the Police has identified the wrongdoer in the form of a very famous TV anchor with a formidable reputation, I do not understand the reason for such a prolonged investigation and interrogation. It may be kept in mind that like cases under the Arms Act, the essential ingredients to prove the offences u/s 153 A,295 A, 505(2) IPC are tangible not abstract and the investigation is fairly simple. So, when the Police is already in seisin of the materials I also do not understand why an investigation report is not being filed to bring the case to its logical end which alone is the purpose of filing the case.

I may clarify that I have cited examples of only one community having committed such offences because there is a degree of authenticity attached to these incidents. I do not discount similar offences having been committed by any other community which also would and should be similarly treated.

It would do well for the State to remember that it will continue to fail the test of an average person who feels constitutionally guaranteed to be protected from injuries prohibited by law, until it takes steps to complete the cycle. Till then, the State in all the three situations mentioned above, will be viewed ironically as being on the wrong side of Law, an accomplice of the wrongdoer. Also, in our fair minds a quiet revolution is taking place because we know the difference between Right and Wrong. And it is this knowledge, which saves our sanity and insulates us from the indecencies and pretensions of the State.