Why Justice Dalveer Bhandari's Vote At ICJ Should Not Be Linked To India's Position On Russia-Ukraine Conflict? 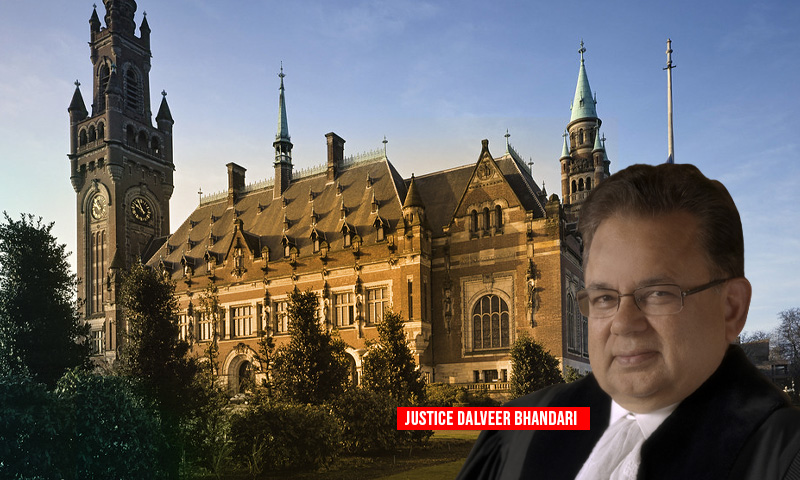 The International Court of Justice (ICJ) at the Hague, Netherlands, on Wednesday directed Russia to immediately halt its military operations in Ukraine in a 13-2 judgement with India's nominee at the ICJ Justice Dalveer Bhandari joining the majority. Justice Bhandari's vote in favour of indication of provisional measures against Russia has been perceived by few to be in conflict with...

The International Court of Justice (ICJ) at the Hague, Netherlands, on Wednesday directed Russia to immediately halt its military operations in Ukraine in a 13-2 judgement with India's nominee at the ICJ Justice Dalveer Bhandari joining the majority.

Justice Bhandari's vote in favour of indication of provisional measures against Russia has been perceived by few to be in conflict with India's official stance at the United Nations (UN) regarding the ongoing Ukraine-Russia conflict. India has so far abstained from voting on all key resolutions pertaining to the Ukraine-Russia conflict.

Granting Ukraine's request for provisional measures, the ICJ ordered Russia to "immediately suspend military operations that it commenced on 24 February 2022 on the territory of Ukraine." Furthermore, Russia has also been directed to ensure that any irregular units or individuals or organisations under its effective control take no steps in furtherance of Russia's military operation. It may be noted that Vice-President of the ICJ Judge Kirill Gevorgian (Russia) and Judge Sue Hanqin (China) voted against the order indicating provisional measures.

However, all the judges of the ICJ unanimously directed both Ukraine and Russia to ensure that they refrain from any action which can aggravate or extend the dispute before the Court.

This piece seeks to find out whether Justice Bhandari's exercise of judicial function should at all come under scrutiny and whether ICJ judges are under any obligation to purportedly show allegiance to the official positions of their nominating States.

Last month, India abstained on a US-backed, Russia-vetoed draft resolution at the United Nations Security Council (UNSC), that called on Russia to reverse its military attack on Ukraine, asserting that there was still space to return to diplomacy. The draft resolution was not adopted as Russia used its privilege as a permanent member to veto the text. While 11 Council members voted in favour, all three Asian members – India, China and the United Arab Emirates – abstained.

Furthermore, on March 4, India again abstained on a vote at the UN Human Rights Council (UNHRC) in Geneva as the Council decided to set up an international commission of enquiry into Russia's actions in Ukraine. The resolution, "strongly condemned" aggression by Russia, and said it was "gravely concerned" about reports of human rights violations by Russian forces, civilian casualties and the forced displacement of 6,60,000 refugees due to Russian "bombing and shelling" in populated areas.

Similarly, on March 2, India again abstained from voting on the resolution passed by the United Nations General Assembly (UNGA) that strongly reprimanded Russia for invading Ukraine and demanded that there should be an immediate withdrawal of all Russian forces. The resolution was approved by 141 votes in favour, 35 abstentions and five votes against.

How are ICJ judges elected?

Both organs of the UN, the General Assembly and the Security Council vote at the same time but separately. A judge is elected once it receives an absolute majority of the two organs due to which the voting takes place in several rounds.

In a bid to maintain continuity, one-third of the Court is elected every three years by the two UN bodies and during this course, judges are eligible for re-election. In case of a death or resignation before the completion of term, another judge is elected for the remaining term.

If a State appears before the court as a party and a national from that state is not currently a judge, the State may appoint an ad hoc judge who serves only for that case but otherwise has the same powers as the permanent judges.

Justice Bhandari's re-election to the ICJ

Justice Bhandari, a former Supreme Court Judge, has been a member of the ICJ since 27 April 2012. He was re-elected from 6 February 2018 for a term of nine years.

Back in 2017, the Indian government had decided to field Justice Bhandari for re-election at the ICJ as a last minute nomination. Consequently, Justice Bhandari was re-elected to the ICJ which was seen as a major diplomatic victory for India over the United Kingdom. This is because after several rounds of voting, there was a deadlock between the Security Council and the General Assembly.

India's fervent lobbying to re-elect Justice Bhandari was perceived to be a national priority since the ICJ was set to adjudicate the case of Kulbhushan Jadhav, an Indian nation who was accused of espionage by Pakistan. Subsequently, Justice Bhandari was among the 11 judges at the ICJ who had presided over the case of Kulbhushan Jadhav wherein the ICJ in July 2019 had ruled that Pakistan must undertake an "effective review and reconsideration" of the conviction and sentence of Mr, Jadhav and also grant consular access to India without further delay.

It may be noted that the judges supporting the majority judgment voted in line with their respective countries' ballot at the UN General Assembly resolution on Ukraine on March 2. The only exceptions were India and Uganda, who had then abstained. Morocco was absent during the UNGA vote and China too had abstained.

While ICJ judges are nominated by their respective States, they are expected to exercise their judicial opinions independently by evaluating the merits of the dispute in question. Since, the Judges exercise a judicial function, they are not supposed to take into account the diplomatic stances of their nominating States while adjudicating upon a dispute.

Thus, although India has abstained from key UN resolutions condemning Russia's military actions, Justice Bhandari's vote at the ICJ is considered independent based on his interpretation of the Russia-Ukraine conflict.

It may be noted that the ICJ Statute mandates all members of the Court to exercise their powers impartially and conscientiously. Article 20 of the ICJ Statute stipulates, "Every member of the Court shall, before taking up his duties, make a solemn declaration in open court that he will exercise his powers impartially and conscientiously." Furthermore, Article 17 of the ICJ Statute refrains members from deciding any case in which they have previously taken part as agent, counsel, or advocate for one of the parties or in any other capacity.

Even judges ad hoc (a State party to a case before the ICJ which does not have a judge of its nationality on the Bench may choose a person to sit as judge ad hoc in that specific case) are expected to  exercise their judicial function in a non-partisan manner. In fact, such judges have often voted against the submissions put forward by their own country. Judges ad hoc also do not necessarily have to be (and often does are not) nationals of the State that designates them.

However, the institution of the judge ad hoc has not received unanimous support in the international community. Whilst the Inter‑Allied Committee of 1943 argued that "[c]ountries will not in fact feel full confidence in the decision of the Court in a case in which they are concerned if the Court includes no judge of their own nationality, particularly if it includes a judge of the nationality of the other party", certain members of the Sixth Committee of the General Assembly of the United Nations expressed the view, during the discussions between 1970 and 1974 on the role of the Court, "that the institution, which was a survival of the old arbitral procedures, was justified only by the novel character of the international judicial jurisdiction and would no doubt disappear as such jurisdiction became more firmly established".

It may be noted that on Wednesday judge ad-hoc Yves Daudet hailing from France voted in favour of the indication of provisional measures against Russia.

Pertinently, Arindam Bagchi, spokesperson for the Ministry of External Affairs, said at a media briefing on Thursday "They are (there) in individual capacities and they vote on the merits of that. Not appropriate to comment on how judges in the ICJ vote". Pressed for a comment, he further remarked, "He (Justice Bhandari) happens to be an Indian national who is a member in his individual capacity on the ICJ. I am not going to comment on how judges vote on issues that come to the ICJ."

Dr Prabhash Ranjan, Professor and Vice Dean, Jindal Global Law School, opined that all judges at the ICJ have to decide on matters before them on the basis of international law and not on the basis of diplomacy.

"Judge Bhandari is an independent Judge at the ICJ. He has to decide matters before him by applying international law. Therefore all Judges at the ICJ have to decide matters on the basis of international law and not on the basis of diplomacy. To me, this is an unnecessary issue which is being made out..when India abstained from voting at the United Nations General Assembly the issue was not of the kind as that in front of the ICJ. The UN General Assembly is not a Court in that sense", Dr. Ranjan said.

Dr. Ranjan further disapproved of the phrase that Justice Bhandari had purportedly 'voted against the nominating State' by underscoring that the line which separates the judicial function from the function of other organs of the United Nations, that line disappears if one were to make such arguments.

International lawyer Priya Pillai highlighted that ICJ judges exercise judicial functions and are thus supposed to adjudicate disputes through an assessment of international law. She underscored that Justice Bhandari's vote at the ICJ is not akin to a vote at the UNSC or the UNGA and that ICJ judges are not beholden to their nominating States. Reference was also made to instances wherein judges ad hoc had specifically decided against their appointing States.

This is not a vote as at UNSC/UNGA. This is an assessment of #InternationalLaw & an exercise of judicial function. #ICJ judges are not beholden to nominating states. Also, judges chosen specifically by opposing parties (judges ad hoc) have also decided against 'their' states. https://t.co/cTVrG41GT7

Also Read: By Simply Alleging Genocide, A Country Can't Invade Another : Ukraine Argues Before ICJ In Case Against Russia