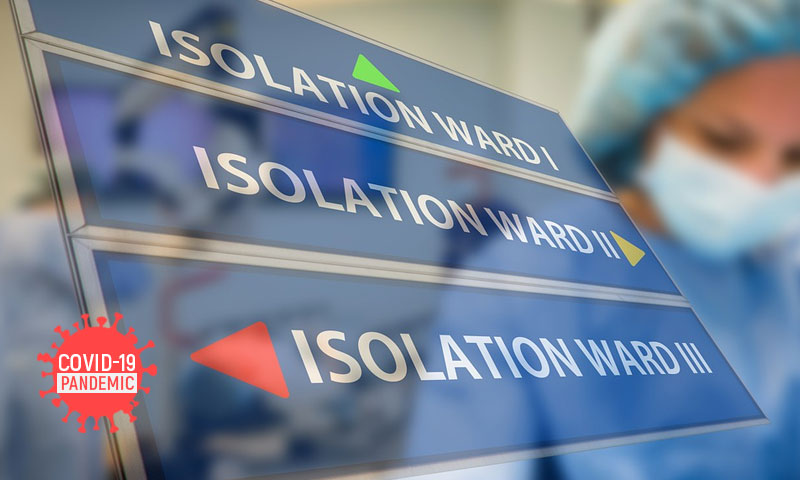 As the novel coronavirus COVID-19 holds the country, its people and its economy to ransom, the Prime Minister has called for a 21-day nation-wide lockdown to curb the unrestrained spread of the pandemic. The Finance Minister has announced a relief package worth INR 1.70 lakh crore, in a bid to alleviate the immediate economic impact of COVID-19 on the financially weaker sections of the...

As the novel coronavirus COVID-19 holds the country, its people and its economy to ransom, the Prime Minister has called for a 21-day nation-wide lockdown to curb the unrestrained spread of the pandemic. The Finance Minister has announced a relief package worth INR 1.70 lakh crore, in a bid to alleviate the immediate economic impact of COVID-19 on the financially weaker sections of the society. Various States have also announced a slew of relief packages. The Reserve Bank of India has, on its part, introduced several measures to increase liquidity and ease banking regulations.

A few days ago, an article was published on a website named inventia.co.in, claiming that the Prime Minister was likely to announce 'financial emergency' under Article 360 of the Constitution of India. This created quite a furore, inviting the Press Information Bureau to tweet that the story was "malicious and fake" and that there was no such plan. Finance Minister Nirmala Seetharaman also refuted the report during her press conference.

In this backdrop, a Public Interest Litigation has come to be filed before the Supreme Court by a think tank – Centre for Accountability and Systemic Change (CASC), asking for the declaration of financial emergency under Article 360. The thrust of the plea appears to be towards unification of efforts by the Centre and the State in an effort to fight the 'global epidemic', particularly in view of divergent and arbitrary steps being taken by States in exercise of powers under Section 144 of the Code of Criminal Procedure, 1973; the Epidemic Diseases Act, 1897; and the Disaster Management Act, 2005.

The question that begs to be answered is whether the declaration of a financial emergency, will in fact effectively address all the issues identified by the think tank. While the Petition rightly asks for a 'unified' central command in the fight against COVID-19, the scope of the President's power under Article 360 may not be as wide as one may perceive.

Article 360 has not been pressed into service thus far and it's scope and ambit remains to be tested. With virtually no jurisprudence detailing the contours of Article 360, one may look to the Constituent Assembly Debates to gather some insight into the nature of powers that the President and the Central Government may come to wield if this provision is invoked.

Article 360, or draft Article 280A as it then was, came to be introduced by Dr. B.R. Ambedkar quite belatedly on the 16th of October, 1949, during the tail end of the second reading of the Draft Constitution. Dr. Ambedkar was met with stiff opposition when he sought to introduce the provision which, according to some, proposed to "introduce a new kind of emergency unknown in any system".

Dr. Ambedkar explained that draft Article 280A drew inspiration from the National Recovery Act of the United States, passed in the year 1933 to combat the aftereffects of the great depression. The National Recovery Act could never be effectively used, since it was struck down by the United States Supreme Court, soon after its enactment. To prevent such a situation from befalling upon any prospective Indian legislation, the framers of the Constitution deemed it fit to introduce financial emergency provisions in the Constitution itself.

After that brief introduction, the Chairman invited the members to present amendments, if any, to the draft provision. The first member to offer suggestions was Prof. Shiban Lal Saxena, who felt that the powers proposed to be conferred on the Centre needed to be enhanced further. Saxena thought it fit to enable the Parliament to make laws in respect of subjects contained in the State List as if they were subjects in the Concurrent List during the emergency period since "It is quite possible that the State may be forced by some legislation of their own, by their own laws to act in a particular manner and may not have the legal authority to carry out the directions of the President… a mere order will not enable the President to pass orders or to have them carried out because they may conflict with the laws of the States and it may not be possible for the President to get those laws changed". However, since the amendment proposed to confer sweeping powers on the Parliament, it was rejected when put to vote.

Sh. H. V. Kamath, famous for his theatrics and frequent interjections, vehemently opposed draft Article 280A. He felt that an emergency provision like this could be invoked only in the dire strait of a financial breakdown or economic disaster. Kamath apprehended that the provision as presently worded may encourage the President to consider even situations of State deficit budgets as a threat to financial stability. Mr. R.K. Sidhva later responded to Kamath, stating: "If we have a President who really declares, because of a deficit budget that there is financial emergency, then I must say that that President is not worthy of occupying the high place that he would occupy". Kamath's amendments thus came to be rejected. Given that the government is not considering proclamation of financial emergency even when being faced with unprecedented economic breakdown, Kamath's apprehensions may have been misplaced.

Kamath ceded the floor to Sh. Brajeshwar Prasad, who was a strong proponent of empowering the Centre and demanded that an emergency, if declared, be permitted to last till the President deemed it fit. His suggestions were not accepted by the Assembly, since his amendments stemmed from a complete lack of faith in the Parliament and his belief that "For a long time to come, the executive and the executive alone will play a dominant part in our national life."

With no further amendment forthcoming, the floor was thrown open for discussion. Mr. R.K. Sidhva defended the provision in right earnest and commended the drafting committee for having the foresight to realize that such a situation may challenge independent India in the future. He said: "But a real emergency might arise whereby the financial stability may be affected, and we will be perfectly justified if we have an article like this, and I have no doubt at all in my mind that this article then would be very helpful".

Dr. Ambedkar however did not find a supporter in Pandit Hirday Nath Kunzru, who, like Kamath, passionately criticized the provision. However, unlike Kamath, Kunzru was of the view that draft Article 280A was toothless. Perceiving the provision as one enabling nothing more than spending cuts, he said: "The whole object of the amendment seems to be to reduce expenditure and to prevent the provincial Governments from giving up any of their existing sources of revenue. Can an amendment with this purpose be said by any stretch of language to resemble even remotely the National Recovery Act of the United States?"

Viewing the provision as displaying complete lack of trust in the ability of the provinces to manage their own finances, Kunzru quipped: "Is there any reason why, disregarding all past experience, we should show complete distrust of the provinces and treat them as though they were children and the President a village school master?" Kunzru believed that this provision, for all practical purposes, discarded the principle of federalism enshrined in the Constitution and signalled the move towards a unitary Constitution, since "The Centre will acquire complete control over the budget of the province and will be able to dictate both to the provincial government and to the provincial legislature what financial policies they should adopt".

At this juncture, Dr. K.M. Munshi stepped in to diffuse the situation and offer his support to Dr. Ambedkar. Responding to Pandit Kunzru's apprehensions, Dr. Munshi said that there would not be any multiplication of functionaries, since "the Centre, when it acts under this article 280A, will act through the functionaries of the State itself." Emphasising the need for this provision, Dr. Munshi said:

In normal circumstances, when the finances of the country are stable, so long as the credit of the country stands, there is no chance of this article being brought into force. It is only when there is a financial emergency that it has to be brought into force and till then the provinces are completely free to do what they like. The attitude is not "school masterly" as Suggested. The attitude is that the Centre will step in at the time when there is a breakdown in the financial structure of the country.

This article in the Constitution is the realization of one supreme fact that the economic structure of the country is one and indivisible. If a province breaks financially, it will affect the finances of the Centre: if the Centre suffers, all the provinces will break. Therefore the inter-dependence of the provinces and the Centre is so great that the whole financial integrity of the country is one and a time might arise when unitary control may be absolutely necessary.… In a financial emergency there cannot be a greater privilege than that all financial affairs shall be controlled and directed from the Centre, as put forward in 280A. That is the object, and I submit it is an object without which the Constitution would remain incomplete and I invite the House to carry this article unanimously.

The members of the Constituent Assembly heeded Dr. Munshi's appeal and approved the article without any amendments.

While respecting the need for States to cede control to sustain the financial integrity of the country, the framers of Article 360 took great care to ensure that unbridled powers were not conferred on the Centre. In rejecting the amendments proposed by Saxena, for instance, the Constituent Assembly sought to prevent a complete takeover of State legislatures by the Centre and restrict the Centre's involvement to the issuance of directions. However, the possibility of conflicts between the directions of the Centre and State laws, as pointed out by Saxena, remained to be addressed.

Saxena appears to have had the foresight to anticipate issues which the think tank is presently complaining of. Matters like public order, police, public health and sanitation, hospitals and dispensaries, production, supply and distribution of goods, to name a few, fall under the State List. It would be interesting to see how the Centre deals with such conflicts, if Article 360 is ever invoked.

One thing, however, emerges clearly from the debates. The directions that the Centre may issue in exercise of its powers under Article 360 can only pertain to financial matters. The issues pointed out in the petition filed by the think tank, including differences in approach in implementing S. 144 and arbitrary police action, may remain unaddressed, even if Article 360 comes to be invoked.

Be that as it may, if financial emergency is indeed proclaimed, we only hope that the Centre remembers Sidhva's words:

I am confident that the President, whosoever he may be, he will exercise his power rightly, and interpret this article in the right sense and in the right manner and for the benefit of the country and the benefit of the people of this country. With these words, I support the amendment that has been moved by Dr. Ambedkar, article 280A.

This Article is first published here