A Truly Uniform Judiciary Through A Hybrid Hearing System 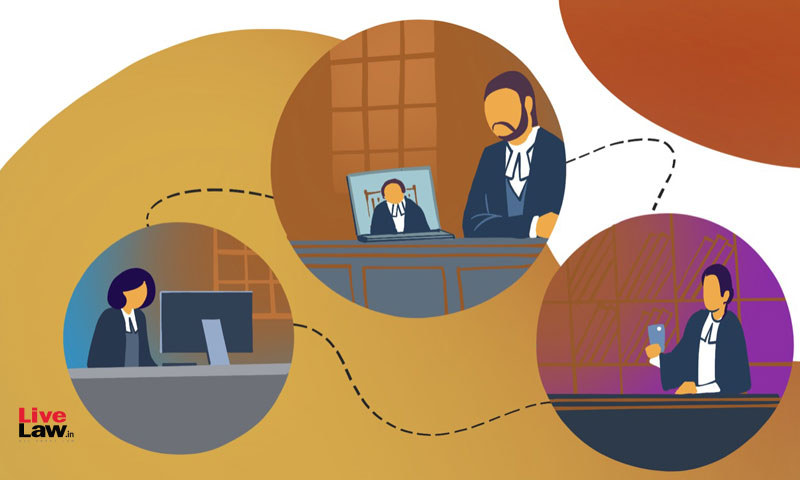 When we entered 2020, it was unimaginable that the Supreme Court of India would start its functioning completely online. The corridors till February were packed with lawyers and litigants, the court halls over-crowded, physical files being loaded in tons by the clerks and court staff to and from the court halls, internal arrangement of the court halls being constantly altered...

When we entered 2020, it was unimaginable that the Supreme Court of India would start its functioning completely online. The corridors till February were packed with lawyers and litigants, the court halls over-crowded, physical files being loaded in tons by the clerks and court staff to and from the court halls, internal arrangement of the court halls being constantly altered to accommodate the ever-growing assemblage of advocates. One recalls, with much nostalgia, even those moments of push and pull, where one would struggle to enter into and exit from a court hall, trying to make his or her way forward while the matter is being called out. And then came by COVID-19. While the world changed, the Supreme Court, High Courts and other courts across the country adapted to technology and switched online. Though limited in nature, the system did provide some amount of relief. Voices of protests, here and there, were raised against the virtual system. Demands for physical hearing were heard often in those early days. But as COVID-19 raged through the country and the dust settled, one realized that the virtual court is likely to be the new normal for a while. However, as we entered 2021, this realization has taken a new dimension – the 'new normal', rather than being pro tem measure, might be here to stay albeit in a new avatar.

The Indian Constitution has envisioned an integrated judicial system with the Supreme Court at the top followed by the High Courts and then the subordinate judiciary. This single system of courts enforces both the Central laws as well as the State laws. Though the legislature and executive is federal in nature, the judiciary has been, consciously and deliberately, setup otherwise.

According to Dr. Ambedkar, though a dual judiciary is the logical consequence of a dual polity which is inherent in a federation (like in USA), the proposed Indian Federation though a Dual Polity has no Dual Judiciary at all. The High Courts and the Supreme Court form one single integrated Judiciary having jurisdiction and providing remedies in all cases arising under the constitutional law, the civil law or the criminal law. This was done to eliminate all diversity in all remedial procedure. Unified judiciary, therefore, is a unique feature of the Indian federation.

Right to access to justice is a firmly rooted principle in the Indian jurisprudence. Every person in India is entitled to access to any court across the country. Emanating from Article 21 of the Constitution, it encompasses myriad rights in itself – right to speedy trial, right of fair trial, right against delayed execution, right to legal aid, right of appeal, etc. A facet of access to justice is found in Article 22(1)[2] of the Constitution is the right of a person to consult, and to be defended by, a legal practitioner of his choice.

While theoretically, right to access to justice is a fine concept; in practical terms, considering India's vast georaphical expanse, the right is practiced more in breach. While courts at the subordinate level might be considered to be reasonably accessible, as we move up the hierarchy, the physical location of superior courts (and consequently, the costs involved) has a profound impact on their accessibility by a common litigant. The very fact that the High Court of a State is physically located at a particular place would dissuade a litigant to approach the higher forum. Some states like Madhya Pradesh, Rajasthan, Karnataka, Uttar Pradesh have more than one bench of the High Court considering the hardships faced by the litigant.

The Supreme Court of India sits at the summit of a pyramidal, unified and integrated judicial system.[3] However, accessibility to the Supreme Court has been an issue of concern for quite some time. The Law Commission of India had recommended for constitution of benches of the Apex Court in its 125th (para. 4.17)[4] and 229th (paras. 3.1 and 3.2)[5] Reports. Article 39A[6] has been employed to justify creation of benches of the Apex Court (see here). Even recently, there have been demands for a Supreme Court bench in south India (see here and here).

Moreover, 'cross-country litigations' between parties is not uncommon and locational advantage of one party might itself be a cause for tilting the scale of justice. Principles concerning 'territorial jurisdiction of a court' or 'seat of arbitration' assume grave significance when one weighs the locational advantage of parties. Access to justice seems to be comprised on more than one occasion in such situations resulting in one-sided settlements.

It is not only from the litigant's point of view but also for the advocates that courts across the country ought to be made more accessible. Section 30 of the Advocates Act, 1961 guarantees a statutory right to an advocate to practice throughout the territories to which the Act applies-

The Central Government, in exercise of its powers under sec. 1(3), of aforesaid Act appointed 15th June 2011 as the date on which section 30 came into force.[7] An advocate, therefore, who is enrolled on any State Bar Council is, as a matter of right, entitled to appear before all the courts in the country.

Inspite of the above constitutional and statutory setup, experience informs us that parties (and their advocates) find it difficult to access the courts. Logistical issues like the costs involved, engagement of a lawyer of one's own choice, physical distance to approach a court premise, balancing between court litigation and one's one work (whether personal or for gains), etc. tend to influence the decision to initiate or continue dispute resolution process through courts.

Virtual courts seem to have provided the solution for this facet of access to justice. Onslaught of COVID-19 has turned out to be a leveler of sorts for persons opting to resolve their disputes through the court processes. The Indian judiciary was quick to adopt technology in order to ensure availability of at least some courts during the initial lockdown period and progressively increase accessibility of courts during the remaining period of 2020. What the courts failed to appreciate during regular times, it adopted during the pandemic – the power of technology to transform the judiciary truly uniform. The unfortunate times of COVID have shown us the path for a more accessible justice system by approaching the courts through e-filing and virtual hearings. The choice of virtual platforms, the issues of internet connectivity, the problems of lawyers adopting to technology, etc are issues which ought to be treated as temporary considering the larger, long term benefit of a better access to justice through use of technology. The Indian courts are witnessing a transformation as a single, unified judiciary, which was originally envisioned by the markers of the Constitution.

As the COVID-19 curve is flattening in India, expectations of physical hearing in 2021 would re-bound. However, to return completely to physical hearing (of pre-COVID era) would, in my view, make the entire experiment of virtual hearing virtually futile. Our experience with virtual hearing ought to be made full use of in future development of the system. At the same time, considering practical difficulties, physical hearing must also continue. Providing optional system would, it seems, be the better choice of all. It is for the courts to fully adopt the hybrid system of hearing across the country. If all the courts uniformly adopt the hybrid system (virtual and physical) for every matter, it would be unlikely that the demand for benches of a particular superior court or of a tribunal would be heard in future. It would be unlikely that a litigant would worry about costs in approaching a court situated at a far away place. An advocate would be able to exercise its statutory right available under section 30 of the Advocates Act of appearing in any court without additional burden upon the litigant.

Adoption of the Constitution of India in 1950 gave an Indian citizen a fundamental right to access to justice anywhere in this vast country. With this particular right to approach a court, the Rule of Law was firmly embedded in our democracy. We are once again on the verge of another monumental transformation of the Indian courts (and thus its access in order to enforce the Rule of Law). The right choice would provide further impetus to a common man on this front. With the experience gained over trial and errors, the stakeholders of the system also seem to be ready for this transformation. It is now upon the courts across the country to adopt this system even post-COVID and offer a hybrid solution, where any matter can be argued in any court from anywhere either physically or virtually and make the Indian judiciary uniform for all times to come.

Creation of a hybrid system is the need of the hour so that every citizen of the country finally has access to justice across the Indian judicial system. A litigant can have a choice of his lawyer as guaranteed under the Constitution. An aggrieved person need not worry about time, expenses and uncertainty only because of physical distance between himself and the court. The concept of availability of ordinary and extraordinary jurisdiction of courts would be more meaningful. This is an opportunity for the judicial system to ensure last-mile availability of its services to a common man by adopting a hybrid hearing system. After all, it is for the common man that the courts exist and not the other way round. It is time that we take this step to bring justice closer to home.

[2] Article 22(1) on The Constitution Of India: Protection against arrest and detention in certain cases.- No person who is arrested shall be detained in custody without being informed, as soon as may be, of the grounds for such arrest nor shall he be denied the right to consult, and to be defended by, a legal practitioner of his choice.

[5] Need for division of the Supreme Court into a Constitution Bench at Delhi and Cassation Benches in four regions at Delhi, Chennai/Hyderabad, Kolkata and Mumbai (August 2009).

[6] The State shall secure that the operation of the legal system promotes justice, on a basis of equal opportunity, and shall, in particular, provide free legal aid, by suitable legislation or schemes or in any other way, to ensure that opportunities for securing justice are not denied to any citizen by reason of economic or other disabilities.