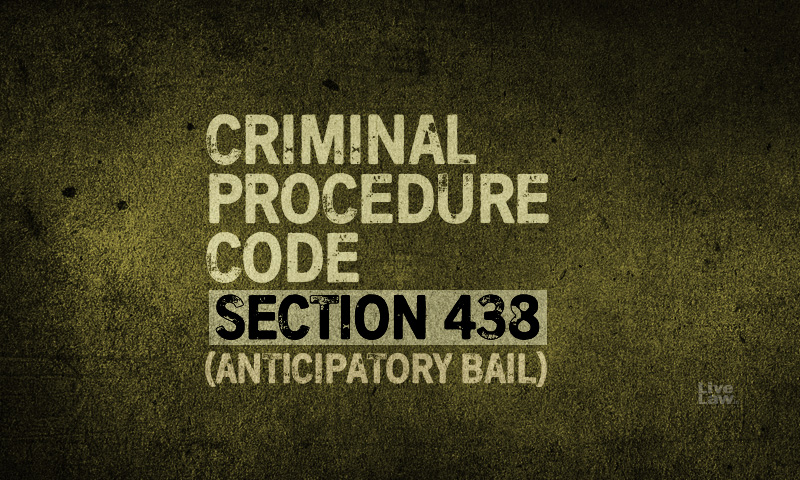 "Anticipatory bail" is not defined in the Code of Criminal Procedure,1973, it was not even a part of the earlier 1898 code. The term was first time mentioned by the 41st Law Commission Report,1969 in which a need was felt to include such provision to safeguard an accused who is apprehending or has a reason to believe that he may get arrested for a non-bailable offence. Further,...

"Anticipatory bail" is not defined in the Code of Criminal Procedure,1973, it was not even a part of the earlier 1898 code. The term was first time mentioned by the 41st Law Commission Report,1969 in which a need was felt to include such provision to safeguard an accused who is apprehending or has a reason to believe that he may get arrested for a non-bailable offence.

Further, the need for such provision arose because now and then prominent persons try to accuse their rivals in false cases to disgrace them by getting them held in jail for some days. Also if there are reasonable grounds that a person accused of an offence has fewer chances of absconding or misusing his liberty while he is on bail then it will not be logical to make him first submit to custody, remain in prison for some days, and then apply for bail.

The Parliament considered the recommendation and while enacting the 1973 Act, added the provision of granting bail to a person apprehending arrest under Section 438. The intention of the legislators was not to make anticipatory bail a "blanket protection " thus, it cannot operate in respect of an offence committed in the future and does not permit the accused to commit further offences and claim relief from arrest.

Further, the provisions of Section 438 cannot be invoked after the accused has been arrested and after arrest, if he is to be released on bail then he must seek remedy under Section 437 or 439 Cr.P.C.

In the case of Bal Chander Jain vs. State of M.P, it was held that "Anticipatory bail" means "bail in anticipation of arrest" and when a competent court grants anticipatory bail, an order of releasing a person at the time of arrest is granted.

In M.P. & Anr. vs. Ram Kishan Balothia and Anr, the Apex Court held that Anticipatory bail was not there as a statutory right before 1973. Therefore, it cannot be considered a fundamental right under Article 21 of the Constitution of India.

This Article broadly interprets the provisions of Anticipatory bail and covers all the important Judgments related to it including the recent landmark Judgment of Sushila Aggarwal vs State of Delhi; under which very important questions were answered by the Constitutional Bench of the Supreme Court.

Section 438 is divided into 6 subsections. Section 438(1) lays down "when any person having a reason to believe that he may get arrested for a non-bailable offence then he can apply for anticipatory bail to the High Court or the Court of session and it is at the discretion of the Court that whether they want to give the bail or not". Thus, anticipatory bail is not a matter of right of the accused as regular bail in case of bailable offence or the default bail under Section 167(2), Cr.P.C.

In the case of Savitri Agarwal v. State of Maharashtra & Anr, the court held that the belief of the applicant seeking anticipatory bail must be founded on reasonable grounds and not just based on mere "fear".He must have a reason to believe that he is likely to be arrested for a non-bailable offence and should disclose specific events and facts which can help the Court to judge the reasonableness of his belief

The Parliament in 2005 has introduced amendments in Section 438 in which the Courts are required to be more vigilant while granting any relief under this provision.

The court shall take into consideration the following:

· The nature and gravity of the accusation

· The background of the applicant, and the fact about his previous conviction or imprisonment for a cognizable offence.

· If the accusations made in the FIR are made to harass or humiliate the applicant by having him arrested.

By considering all these factors the Court can either dismiss the bail application or grant interim relief.

In the case of M.C Abraham and Anr v. State of Maharashtra and Anr, the Apex Court held that the police don't need to arrest a person merely because his Anticipatory Bail has been rejected.

The Parliament inserted Sub-section 1(A) stating that, if the court has prima facie found any merits in the application, and is not rejecting the relief for anticipatory bail then the application under this section cannot be disposed of until the Public Prosecutor is heard. Thus, a 7 days' notice shall be issued to the Public Prosecutor and the Superintendant of Police (SP) to give reasonable time to the prosecutor to defend the said application before it is finally heard.

Under Section 438(2) the High Court or the Court of Session can impose certain conditions while granting the Anticipatory Bail; like:

· Whenever it is required the person shall be present for interrogation by a police officer.

· He must not directly or indirectly persuade, threat or promise to any person aware of the facts of the case to dispirit him from disclosing such facts to the court or any police officer,

· The accused shall not leave India without prior permission of the court,

· The Court can impose other condition which is imposed under section 437(3).

Section 438(3) lays down that if such person is arrested without the warrant by the police officer on such accusation and he is having the anticipatory bail at the time of arrest or at any time while in the custody of such officer then he shall be released on bail.

Section 438(4) states that any offence committed under Section 376(3) Section 376AB or Section 376 DB of the Indian Penal Code, 1860 which are provisions related to rape and gang rape of minors, then the above provisions are not applied.

Three orders which the Court can pass under Section 438

If interim protection is granted, the court will issue notice to the Public Prosecutor and Superintendent of Police of not less than 7 days with the copy of the order to hear him in open court. It is to be noted that, here the interim protection is not the grant of anticipatory bail it means that the court is not rejecting the bail application and before the hearing of the anticipatory bail application it has granted interim bail to the accused.

In the case of Arnesh Kumar v. State of Bihar the Supreme Court held that while deciding an anticipatory bail application for offences u/s 498A i.e cruelty on women by her husband or any relative, it necessary that there should be a mandatory notice to the accused to appear before the police officer u/s 41A if he is booked for offence with punishment up to 7 years.

In the landmark case of Gurbaksh Singh Sibbia vs. State of Punjab the Apex Court laid down general conditions for granting anticipatory bail:

The term Anticipatory Bail is a misnomer i.e. the name given to it is not correct, in real terms it is not bail. Bail is derived from the term "Bailment"; both of the terms are analogous as when the Court grants bail to the accused they expect that they will receive the accused as it is as he was given, as the person is the property of the state and it has to be assured by the surety that he shall be returned to the court when called upon by the court. The delivery of the accused is given temporarily to the surety on the promise that he will be produced before the court.

According to Wharton's Law Lexicon Dictionary, "the grant of bail as is to set at liberty a person arrested on security being taken for his appearance" Thus, bail is released from restraint.

Further, as there is a post-arrest order of bail, anticipatory bail is a pre-arrest legal process directing to release the person on bail, in whose favor it is issued.

The pre-arrest bail granted in anticipation of arrest has to function like any other order granting bail till an order of conviction or till an assenting direction is passed under Section 439(2) Cr.

In the recent landmark judgment of the Hon'ble Supreme Court in Sushila Agarwal v. the State of Delhi, the Apex Court answered some crucial questions regarding anticipatory bail.

The issues in the present case were:

· "Whether the protection granted to a person under Section 438 of Cr. P.C should be limited to a fixed period to enable the person to surrender before the trial court and seek regular bail."

· "Whether the life of anticipatory bail should end at the time and stage when the accused is summoned to court."

The Constitutional Bench of the apex court unanimously held that "there can be no time limit for the anticipatory Bail and the protection granted to a person under Section 438 Cr.PC should not consistently be limited to a fixed time; it should be in favor of the accused without any restraint on time."

Justice MR Shah added that if the circumstances demand, the conditions can be imposed by the court when it is granting anticipatory bail order including time limit, chiefly the stage at which

· The anticipatory bail application is filed, whether at the stage before the FIR is lodged; or

· At the stage when the FIR is already filed and the investigation is in progress; or

· At the stage when the investigation is complete and the charge sheet is filed.

The Court's objective is to balance the two opposing interests, that is protecting the liberty of the accused and the sovereign power of the police to conduct a fair investigation. Thus, it

has absolute discretion to direct the duration of the anticipatory bail which can vary from a few weeks to even such period until the charge sheet has been filed and may also extend till the end of the trial.

While answering the second question the Hon'ble court held that, "the duration of an anticipatory bail order does not end normally at the time and stage when the accused is summoned by the court, or when charges are framed but can continue till the end of the trial. Further, the court can limit the term of anticipatory bail if there are any special or peculiar features necessitating the same".

Anticipatory bail cannot end automatically. It can only end if there is any time limit that has been imposed by the court of sessions or High Court while granting bail under section 438 Cr.P.C.

Anticipatory Bail is not a protection from arrest but it is a protection of the accused from custody. It is an instrument to secure an individual's liberty; it does not give a person the passport to commit a crime or provide a shield against any kind of accusation. Further, there are two pre-requisites before the application for anticipatory bailed is applied before the Court; First, The offence against which the bail is required should be non-bailable, and Second, that the person apprehending arrest must have a "reason to believe " about his arrest in such non-bailable offence. Such belief must be reasonable and not just a mere fear of being arrested. Thus, Section 438 cannot be attracted to vague allegations.

Further, the filing of FIR is not a prerequisite for the filing of an Anticipatory bail application, and it can also be granted even after an FIR is filed, so long as the applicant has not been arrested.