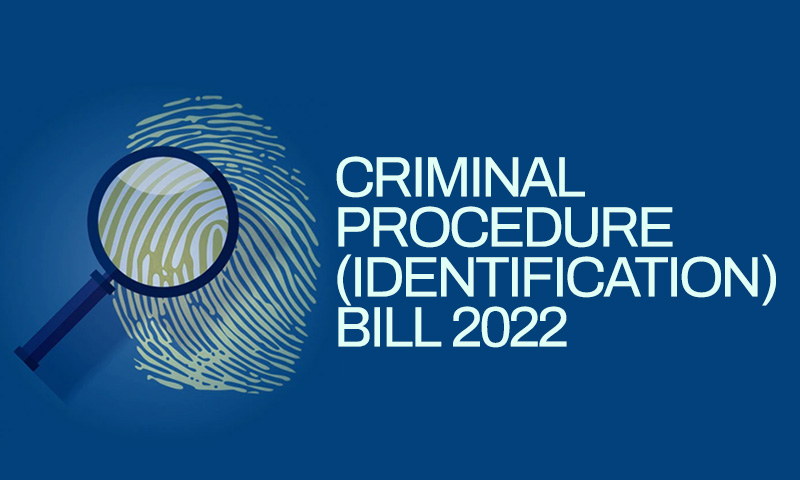 The Criminal Procedure (Identification) Bill, 2022 (hereinafter referred as the Bill) provides for collection of 'measurements' from any convict or a person arrested for an offence. The term 'measurement' used in the Bill has a broad scope insofar as it now includes not only the physical, behavioural attributes of a person but also, the biological samples. Furthermore, the Bill also...

The Criminal Procedure (Identification) Bill, 2022 (hereinafter referred as the Bill) provides for collection of 'measurements' from any convict or a person arrested for an offence. The term 'measurement' used in the Bill has a broad scope insofar as it now includes not only the physical, behavioural attributes of a person but also, the biological samples. Furthermore, the Bill also expands the scope of the person who shall be empowered to take such measurements. One of the most concerning aspects of the Bill is that it vitiates the whole concept of consent and privacy. This Bill seeks to repeal the Identification of Prisoners Act, 1920.

What All Does The Term Measurement Include?

One of the key features of Bill is the expansion of the term 'measurement'. According to Clause 2(1)(b) of the Bill, the term will include "finger-impressions, palm-print impressions, foot-print impressions, photographs, iris and retina scan, physical, biological samples and their analysis, behavioural attributes including signatures, handwriting or any other examination referred to in section 53 or section 53A of the Code of Criminal Procedure, 1973."

In simple words, this Bill provides for collection of data including the biometrics of a person, including the physical, biological samples.

Who Shall Collect The Measurements?

Whose Measurements May Be Collected?

Moreover, Clause 5 of Bill empowers the Magistrate to compel 'any person' if he is satisfied that it is 'expedient' to do so for any investigation or proceeding under CrPC or any law.

Can I Be Compelled To Give My Measurements?

The scope of consent is one of the most criticized aspects of the Bill. As discussed, under Clause 3 of the Bill a person may be required to give his measurements. The persons discussed under the said clause may be compelled to give their measurements.

The proviso to Clause 3 clearly provides that a person may not be obliged to give biological samples until and unless he has been arrested or convicted for an offence against women or child or an offence punishable with more than seven years of imprisonment.

Therefore, in simple terms, any person who is arrested for an offence that does not involve women or children, and is punishable with imprisonment of less than 7 years, then such person can be compelled to provide all other measurements excluding biological measurements.

What If I Refuse To Give My Measurements?

As already discussed, the scheme of the Bill is such that a person may be compelled to give his measurements. As per Clause 6 (2) of the Bill, in case a person refuses or resists to provide the measurements, then he would be deemed to commit an offence under Section 186 IPC.

What Will Be Done With My Measurements?

Clause 4 of the Bill provides that National Crime Records Bureau (NCRB) shall be entrusted with the responsibility of Collection, storing, preservation of measurements and storing, sharing, dissemination, destruction and disposal of records. As per the said clause NCRB will be empowered to

Will My Measurements Be Deleted? If Yes, When?

The measurements of a person will be retained up to 75 years from the date of collection of such data. Moreover, the proviso to Clause 4 provides that in case a person has not been previously convicted for any offence and his measurements were taken under the provisions of this Bill, then such records will be destroyed if the person is discharged, acquitted by the court, released without trial, after exhausting all legal remedies.

How Is The 2022 Bill Different From The Identification Of Prisoners Act, 1920?

As per 1920 Act, fingerprints, foot-print impressions, photographs could have been collected. However, as per the 2022 Bill the scope of the term measurements has been expanded and now includes biological samples and behavioural attributes as well along with those provided under Section 53 and 53A of CrPC.

Under the 1920 Act, A person who is convicted or is arrested for an offence punishable with imprisonment (rigorous) of one year or more may be asked to give their measurements or persons ordered to give security for good behaviour or maintaining peace could have been obtained and the magistrate was empowered to order collection from any arrested person to aid investigation. However, as per the 2022 Bill, measurements of a person who is convicted or arrested for any offence may be taken, the exceptions have already been discussed above, moreover the 2022 Bill adds the persons detained under any preventive detention law whose measurements may now be taken. Further it also provides that Magistrate may order the measurements of any person to be taken, not only an arrested person, to aid investigation or proceeding under CrPC or any law.

Problems With The Bill

The Bill has a number of issues and has been criticized on various counts. Few of the issues with the Bill are as under:

1.It fails the test of Article 14: The Bill in its present form fails the test of Article 14. The object of the Bill is to use modern technology and make the criminal justice system more effective. Only those arrested for offences punishable by 7 years or more, or those arrested for offences against a woman or a child may be compelled to give their biological samples; whereas, all arrested persons may be compelled to give measurements other than biological samples. This classification bears no rational nexus to the aim of making investigations more efficient. Moreover, there lies no option of consent with the person, hence it is nothing but manifestly arbitrary.

2.Violative of Article 20(3): As per Article 20(3), one cannot be compelled to be witness against himself. A bare reading of the Bill makes it clear that the measurements of the person may be recorded and be used against him at his trial. Hence, the provisions of the Bill will be hit be Article 20 (3).

3.Violative of Article 21: The scope of the term measurement has been expanded in this Bill; it not only includes physical, behavioural attributes but also biological samples. In order for the Bill to stand the test of judicial review, it must satisfy the fourfold requirement of the doctrine of proportionality laid down in Justice KS Puttaswamy v Union of India[1]. While the Bill has the legitimate aim of improving investigation, detection and prevention of crimes, it fails to satisfy the other three requirements, namely, suitability, necessity and balancing.

4.Powers Conferred: It may be seen that the Bill provides for a police officer or prison officer above the rank of head constable or head warder to collect measurements, which is absurd and may lead to abuse of power and rampant corruption.

5.Time period for which the data is collected: The Bill aims to preserve the records of measurements for period of 75 years from the date of collection of such samples. Hence, it lacks reason and is nothing, but arbitrary.