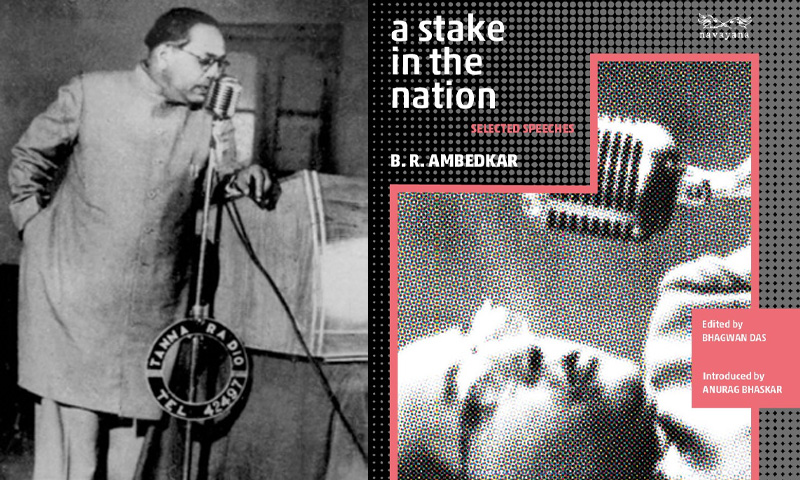 [This is an edited excerpt from the introduction titled "The Resurgent Icon" written by Anurag Bhaskar for the book "A Stake in the Nation" (2020), which is a collection of Dr. BR Ambedkar's selected speeches. The volume is the result of life-long struggle of late Bhagwan Das, one of the Ambedkarite chroniclers. Das brought out the first edition of this book as far back as 1963 under...

[This is an edited excerpt from the introduction titled "The Resurgent Icon" written by Anurag Bhaskar for the book "A Stake in the Nation" (2020), which is a collection of Dr. BR Ambedkar's selected speeches. The volume is the result of life-long struggle of late Bhagwan Das, one of the Ambedkarite chroniclers. Das brought out the first edition of this book as far back as 1963 under the title 'Thus Spoke Ambedkar'. It was the first serious, professional effort to bring out an edition of Ambedkar's work after his death in 1956. This happened long before the Maharashtra government instituted a committee in 1978 to collate, edit and issue Dr Ambedkar's work under the twenty-volume series, 'Babasaheb Ambedkar: Writings and Speeches'. The excerpt is being published with permission from the publisher Navayana.]

When the former Chief Justice of India, late Justice Y.V. Chandrachud, was a young lawyer, he would often go to a café called The Wayside Inn in Kala Ghoda, Bombay. One of the commonest sights there was a man who spent the entire afternoon writing and making notes. It was Dr Ambedkar. At the time, he was making copious notes for the future constitution of India In a life spanning polities, milieus and countries, this was a familiar sight—Ambedkar writing, thinking.

In a manner, Ambedkar was archiving his own thoughts for a future generation; as if he did not want thinking itself to end. He did not want how and what he thought to die with him. An expert of economics, political science, law, and administration, Ambedkar propounded his thought through speeches, invariably momentous, and writings, some self-published, and several left behind as manuscripts.

His wide reading of global history, economics, and politics enabled him to present novel solutions to contemporary challenges. His ability to combine a wide net of influences in the pursuit of reading a particular present turned prophetic for the Indian milieu.

For Ambedkar, no nation could be built on the foundations of inequality and exclusion. Ambedkar thus defined a nation as 'a spiritual reality binding people into a deep comradeship'. He further elaborated: 'Nationality is a social feeling. It is a feeling of a corporate sentiment of oneness which makes those who are charged with it feel that they are kith and kin'. Ambedkar's nation was an ideal society which overrode all differences of economic or social gradations.

In 'Annihilation of Caste', his revolutionary address which in 1936 even well-meaning savarnas could not allow themselves to hear or heed, he conceptualized that 'an ideal society should be mobile, should be full of channels for conveying a change taking place in one part to other parts. In an ideal society there should be many interests consciously communicated and shared. There should be varied and free points of contact with other modes of association'. In that sense, a nation is a society where there is 'unlimited scope' for 'social endosmosis'. Intercommunication, participation, and sharing are the essence of nationhood.

Ambedkar was critical of a narrow conception of nationalism. In his view, 'nationalism', which derived from 'nationality', was the dynamic expression of the 'will to live as a nation'. The concept of nationalism, for Ambedkar, was only useful as long as it endeavored towards social unity, equality and shared association: 'Without social union, political unity is difficult to be achieved. If achieved, it would be as precarious as a summer sapling, liable to be uprooted by the gust of a hostile wind. With mere political unity, India may be a State. But to be a State is not to be a nation'. Ambedkar considered that the demand of minorities to be free from 'aggressive majority's nationalism' is of an equal 'moral import'. He therefore warned against majoritarian nationalism in unequivocal terms: 'If [the] Hindu Raj does become a fact, it will, no doubt, be the greatest calamity for this country… Hindu Raj must be prevented at any cost'.

Rejecting narrow conceptions of nationalism twinned with an unequal social order, he theorized the actualization of a broader form of 'democracy' in India. The existence of a feeling of fellowship was to be the foundation of such a stable and democratic state—it was 'not merely a form of Government … [but] primarily a mode of associated living, of conjoint communicated experience. It is essentially an attitude of respect and reverence towards fellowmen'. In a speech delivered in 1952 at the Poona District Law Library, he said: 'Personally, I define democracy in a different way, in a much more concrete way as a form and method of government whereby revolutionary changes in the economic and social life of the people are brought about without bloodshed'.

It is evident that Ambedkar's understanding went beyond the formal framework of democracy. He called this democracy to be a 'social democracy' — without which the institutional framework of democracy would be of 'no value and would indeed be a misfit'. Ambedkar elaborated further: '[Democracy] is a social organization free from rigid social barriers [and] … is incompatible and inconsistent with isolation and exclusiveness, resulting in the distinction between the privileged and the unprivileged'.

But Ambedkar was well aware of the reality of the Indian society. In a speech introducing the draft Constitution on 4 November 1948, featured in this volume, he said 'Democracy in India is only a top-dressing on an Indian soil, which is essentially undemocratic'. He knew that there existed a wide gap between the ideal of a transformative Constitution and the social reality.

This very short-circuit in the fabric of Indian society haunted Ambedkar. He took pains to leave behind a road-map for an inculcation-to-come among future political actors. During his last address to the Constituent Assembly and on later occasions, Ambedkar spoke at length of the conditions necessary to 'maintain democracy not merely in form, but also in fact'.

Before his death, Ambedkar had proposed to write a detailed treatise titled 'Revolution and Counter Revolution in Ancient India'. Drafts of this manuscript have survived and were published many decades after his death. In it, he wrote a history of the establishment of democratic principles in the Buddhist era as a revolution. This also brought about the counter-revolution by conservative and casteist forces, which resulted in the decline and fall of democratic principles. Extending the historical motif, the adoption of the Constitution of India must be seen as a revolution. The communal violence and hatred against the minorities, Dalits, and tribals is the counter-revolution being consistently undertaken by socially conservative and casteist forces to undo the strength of that revolution.

Ambedkar's fears have turned out to be true. When we see the misuse of authority by governors or the speaker of the lower house, we see why Ambedkar did not want to leave most of constitutional discretions to future politicians. Ambedkar was an ardent advocate of equal citizenship, and would have been severely critical of any exclusionary criterion for citizenship. It is the responsibility of the people of this country to save his Constitution.

The Constitution of India provided a language through which the citizens could communicate with the state and among themselves. 'Ambedkar' and 'Constitution' have become the language of dissent and of social and political participation. In particular, the Constitution has come to symbolize the radical urges for equality for a whole host of communities.

'Ambedkar's Preamble' has emerged as the main literature of protest, with it being recited on the streets. People have sat down in protests in Shaheen Bagh and elsewhere with a deep belief that 'Ambedkar's Constitution' allows them to participate in citizenship discourse as free and equal citizens. The recent events of claiming the Preamble and the Constitution by the citizens as their very own resemble a path towards the professed collective destiny of India.

Whenever the battle to protect the foundational ethos of Indian democracy is fought, not invoking Ambedkar and Ambedkarism is folly. Envisioning a truly free and equal India cannot be done without reading him.