Examining Locust Invasion In India From A Legal Perspective 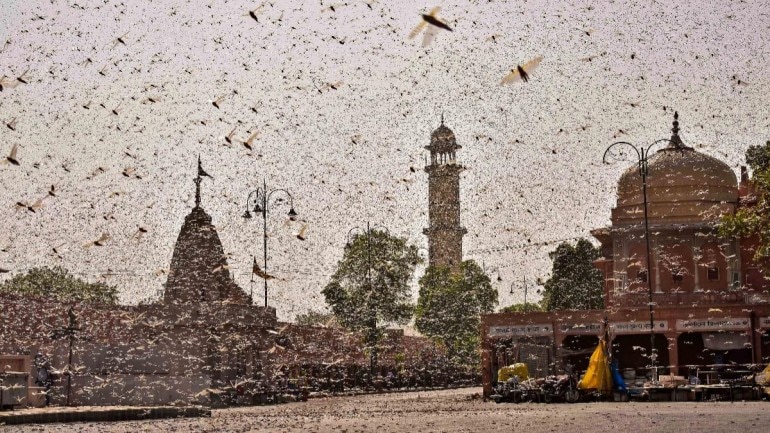 INTRODUCTION Time and again, India which is still largely an agrarian economy has been marred by the invasion of the crop devouring swarms of locusts. Such an invasion on a wider scale is termed as a 'locust plague'. A plague (Level-3) is usually preceded by an outbreak (Level-1) and an upsurge (Level-2). It refers to a situation when the attack on crops by these...

Time and again, India which is still largely an agrarian economy has been marred by the invasion of the crop devouring swarms of locusts. Such an invasion on a wider scale is termed as a 'locust plague'. A plague (Level-3) is usually preceded by an outbreak (Level-1) and an upsurge (Level-2). It refers to a situation when the attack on crops by these trans-boundary insects belonging to the family of grasshoppers wrecks the economy. The UN Food and Agriculture Organization (hereinafter, FAO) estimates that in one day a locust swarm of one square kilometer nearly eats the same amount of food as 35,000 people.

Speaking of this year, the havoc created by the desert locusts in the Indian sub-continent seems to be at an all time high. In February this year, Pakistan had declared a nationwide emergency in light of a massive desert locust plague in the eastern parts of the country. India has already experienced numerous upsurges in the first half of this year. States like Rajasthan, Gujarat, Maharashtra, M.P., and U.P. have been amongst the worst affected ones. For instance, in the latter half of May, the Vidarbha region of Maharashtra was struck with the worst locust attack in 46 years. Furthermore, nearly a kilometre long swarm of locust was sighted on June 11 in the cities of eastern U.P. like Prayagraj. In its June report, the FAO advised countries like India and Pakistan to remain on high alert for the next four weeks in anticipation of possible desert locust attacks. Earlier this year, the FAO had already pitched its requirement of $70 million for a rapid control operation in light of a massive locust invasion especially in the Horn of Africa.

In this piece, we have attempted to put under the scanner this crisis of locust invasion that India is presently facing. We have examined the various existing legal provisions that our country is equipped with in order to deal with such a daunting situation. Then we point out the inherent lacunae in such provisions and what is the way forward. We have also taken into consideration the various technical measures that can help us in combating this crisis in the best possible manner.

PROBLEMS WITH THE EXISTING LEGISLATIONS

Post the Bengal Famine of 1943, an Inquiry Commission led by Sir John Woodhead was appointed in 1944. The Commission published its report a year later and that eventually led to the establishment of the Directorate of Plant Protection, Quarantine and Storage. Apart from increasing the crop production through the route of sustainable agriculture, the Directorate attempts to minimize crop losses by adopting locust pest control measures. It adopts such measures through the application of the Destructive Insects and Pests Act, 1914 supported by Plant Quarantine Order (Regulation of Import into India), 2003. But it is noteworthy that the word locust hasn't specifically been mentioned in the Act which instead uses the phrase 'any insect, fungus or other pest'.

However, the East Punjab Agricultural Pests, Diseases and Noxious Weeds Act (1949) is one legislation that explicitly mentions the term 'locust' in its Section 4(1) (2). Recently it was reported that the Act came under the scanner of the concerned authorities for notifying the male residents not below the age of 14 years for their services in the event of a locust attack if the situation gets worse. However, Sec 4(1) (2) (ii) of the Act has time and again been criticized for its anachronistic nature. The reason behind the same is that the male residents are called for their services through 'a proclamation by beat of drum or other customary modes in the village or locality'. In an era with advanced modes of communication it is more than convenient to reach out to the residents individually but the archaic Section 4(1) (2) (ii) remains unamended. Moreover, while the Act attempts to create a mechanism to deal with situations like a locust invasion, it doesn't take into account the different stages of the attack. Each stage whether it is the outbreak, upsurge or plague, has different requirements. Hence, it becomes all the more necessary for the legislature to introduce a separate Act to deal with locust invasions.

With India already wounded by the COVID pandemic, locusts have again put the disaster management framework under scrutiny in India. One of the most fundamental legislation when it comes to disaster management in India is the Disaster Management Act, 2005 (also DMA). Both the National Disaster Relief Fund (NDRF) and the State Disaster Relief Fund (SDRF) are constituted under section 46(1) and 48(1) of DMA. Both these funds replaced contingency funds at the centre and state level respectively and envisaged creating an integrated framework for efficient utilisation of funds when dealing with a crisis. Although these funds are for emergency usage, to deal with the problem efficiently, a significantly greater deployment of funds is needed especially in research and development.

Section 2(e) of the DMA defines disaster management 'as a continuous and integrated process of planning, organizing, coordinating and implementing measures which are necessary or expedient for- (i) prevention of danger or threat of any disaster; (ii) mitigation or reduction of risk of any disaster or its severity or consequences; (iii) capacity-building; (iv) preparedness to deal with any disaster; (v) prompt response to any threatening disaster situation or disaster; (vi) assessing the severity or magnitude of effects of any disaster; (vii) evacuation, rescue and relief; (viii) rehabilitation and reconstruction.'

The Act also envisages the setting up of a National Disaster Management Authority at the central level headed by the Prime Minister and a corresponding State Disaster Management Authority at the state level headed by the Chief Minister. Further, a District Management Authority under headed by the District Magistrate is also to be constituted. In N.D. Jayal v. Union of India, the Supreme Court observed that Disaster Management means all aspects of planning, coordinating and implementing all measures which are necessary or desirable to prevent, minimize, overcome or to stop the spread of a disaster upon the people or any property and includes all stages of rescue and immediate relief. Locust infestation is of an inter-state nature since these insects move across states freely and damage crops across the country. This furthers the need for a coordinated national response between states when dealing with this disaster.

Under Section 11 of the DM Act, a national plan has to be drawn up by the national executive in consultation with stakeholders when dealing with disasters. As stated by the National Disaster Management Policy 2019, under the Ministry of Agriculture and Farmers Welfare (MAFW), a Locust Control and Research Division has been established. The division conducts regular field surveys in approximately two lakh square kilometers of Scheduled Desert Area in the States of Rajasthan and Gujarat. The government also acts on warnings issued by the FAO in a global coordinated response and then takes measures accordingly. It coordinates with the Desert Locust Information Centre to get monthly updates and holds talks including with Pakistan on how to tackle the situation better. Further, the Directorate of Plant Protection Quarantine and Storage under the MAFW takes measures to protect crops and other plants from pest invasions. Training workshops and research is conducted by the department to investigate possible resolution models. Although the department has these mechanisms to develop safeguards, these have not been effectively implemented on the ground. During the ongoing crisis in Rajasthan, government agencies have not been able to quell the population and farmers have continued to face large scale losses. Although training programs have been attempted by the directorate, officials at the grassroots level still lack a clear understanding of how the local machinery can help and farmers are largely left to fend for themselves.

Overall while the DMA attempts to tackle the growing threat of locusts in India through government mechanisms, there is a clear lack of direction and coordination as to what steps can be taken during an infestation. The peculiar nature of the problem calls for an international coordinated response to the problem. More space and incentives need to be given to private players to attempt to resolve this problem using technology. Scientists in Africa have already started experimenting with supercomputers to come up with accurate predictions to prevent hatching of eggs and reduce the population. The government needs to adopt a proactive approach to this problem and give the agriculture industry much needed protection and security in their trade. Considering the heavy potential of the desert locusts in wrecking our economy, instead of depending upon non-specific and anachronistic Acts like Destructive Insects and Pests Act, 1914 and East Punjab Agricultural Pests, Diseases and Noxious Weeds Act (1949) which place the different kinds of insects on the same pedestal, it becomes necessary to bring in an Act solely focusing on how to deal with the different stages of the locust attacks.

Our ex- PM Lal Bahadur Shastri gave us the slogan of 'Jai Javaan, Jai Kisan' signifying the importance of a farmer in popular Indian imagination and it is high time we give them their much needed due.

(The authors are students of National Law University, Delhi)