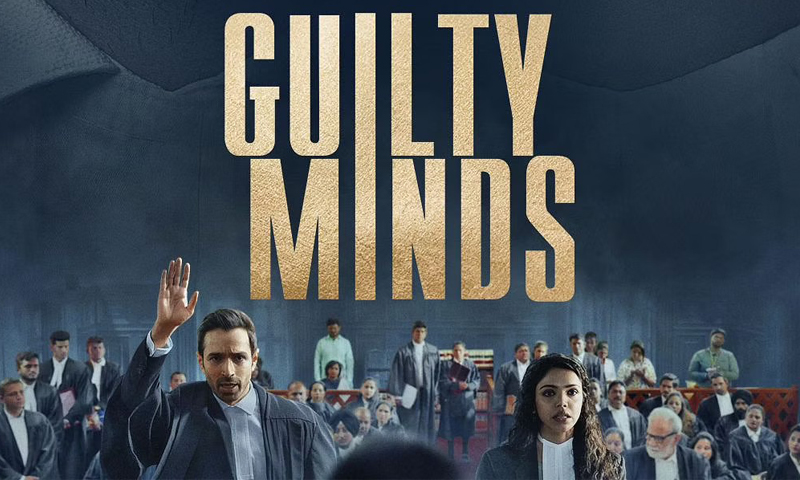 The latest offering of Amazon Prime India is Guilty Minds, an Indian courtroom drama that revolves around contemporary yet controversial legal cases that one ought to encounter in this age of technology. The series is directed by Shefali Bhushan, renowned for her pervious works like Jugni and The song of the scorpions. The show also has a split-second cameo by her father, Shri Shanti Bhushan, former law minister and senior advocate. Unlike its dramatic precursors, the star of this show is the array of cases that it espouses. These cases seem simple prima facie but involve some of the most important legal dilemmas on the intersection of law and justice. It showcases the journey of two ideologically contrasting lawyers Kashaf Quaze (Shriya Pilgaonkar) and Deepak Rana (Varun Mitra). The former is an epitome of virtue and is brought up to view a black and white division of the world while the latter is portrayed to envision the world in shades of grey due to his troubled past.

The show raises moral questions related to law and justice in the Indian context. There is an uncanny resemblance between these questions and the dilemmas raised by Harvard Law School Professor J. Michael Sandel in his legendary course Justice and in his book - What is the right thing to do[1].

The show sets out a ten-episode season with one dedicated case per episode. It touches upon the newfangled predicament that the courts currently face in a technology-driven society. It draws attention to a series of interesting cases:

It rekindles several debates on socio-legal aspects of justice such as debates surrounding development versus environmental sustainability, gender discrimination at the workplace, morality surrounding surrogacy, toxic work culture of outsourced private security agencies, and last but not the least, the nexus of money and muscle power in the criminalization of politics.

The show urges its viewers to ponder over questions as to whether the judge should decide cases according to justice, or according to law and whether justice is a part of the law. It nudges towards moral reflection and makes a case for how justice is seldom linear and often needs to be viewed from several perspectives. It demonstrates the gap that existing laws have with modern day technology and how the lack of a legal framework often leads to acquittal or leniency in punishments. The approach of judges in each of the cases remains largely minimal but they are not preachy on sensitive issues which is often the norm in India. It poignantly depicts how courts have a limited role in applying the law as written and are often forced to omit ' fair justice' considerations.

Idea Of Justice And Intersection With Law

Anthony D'Amato in his seminal work On Connection between Law and Justice[2] puts forth several reasons to argue that justice is an inherent component of the law and not separate or distinct from it. To understand the connection between law and justice, Anthony D'Amato first begins by defining the terms. According to him, 'Law' is the officially promulgated rules which are backed by state enforced sanctions for transgression and 'Justice' is rendering to each person what he/she deserves. He points out that we rarely encounter 'law' and 'justice' in the abstract sense of terms and hence any debate surrounding their connection shall not treat them to be two concepts in direct opposition to each other. The right way could be in highlighting the 'bridge itself' rather than the ends that it purports to bridge. This show resurrects the question and with it the need to reaffirm the connection between law and justice in adjudication.

The show identifies several legal-ethical dilemmas where the line between right and wrong is often blurred and how attempts to balance these interests may end in miscarriage of justice. It alludes viewers to various theories of justice and their approaches towards law. The cases touch upon the debates of justice and the tussle among legal principles based on Jeremy Bentham's Utilitarianism, Robert Nozick's and John Mill's Libertarianism, Immanuel Kant's Supreme Principle of Morality, John Rawls's Egalitarianism, and Aristotle's Theory of Justice.

Finding optimal solutions in a given situation is the function of a rational human. These solutions are based on assumptions that in turn are consciously or unconsciously shaped by one's theory of justice. The show falls short of systematically invoking these theories by being too simplistic and linear in its quest for answers and ignores the importance of understanding these theories which aid judges in arriving at an informed and optimal decision.

The most glaring shortcoming of the show is the continuance of the entertainment industry's lack of apathy to the procedural aspects of real law practice in various courts. The case of death of a young boy and the alleged corruption charges against a Supreme Court Judge which creates the main narrative of the show is its weakest link. It falls into the trap of the over-the-top drama which is often the criticism of Indian legal shows. There are several sequences that are showcased from private lives of lawyers merely to portray the show as a bandwagon of liberalism without making any pivotal addition to the plot. The poor translation of real practice of law into celluloid is of course a daunting task as the viewers are not from the legal community. The Director who hails from a legal family must be aware of this crisis and she might be forced to trade with concern of reaching out to a larger audience. In this context she is entitled for benefit of doubt.

It would be unfair not to give the show credit where it is due. It makes a significant and relevant contribution by highlighting the dilemmas of law and justice that require immediate attention by way of court intervention and also timely action by the legislature and the executive. It does a commendable job by persuading its viewers to understand that in dynamic society the law cannot continue to be linear and render a compartmental treatment (black and white) of justice. To engage further on the subject, interested viewers can visit Professor J. Michael Sandel's course on Justice which is freely available online for getting a better understanding on political philosophy surrounding law and justice and find reasons for our prejudices and assumptions.

The author is a UGC-Senior Research Fellow at Faculty of Law, Osmania University, Hyderabad. Views are personal