Homage To Sir With Love 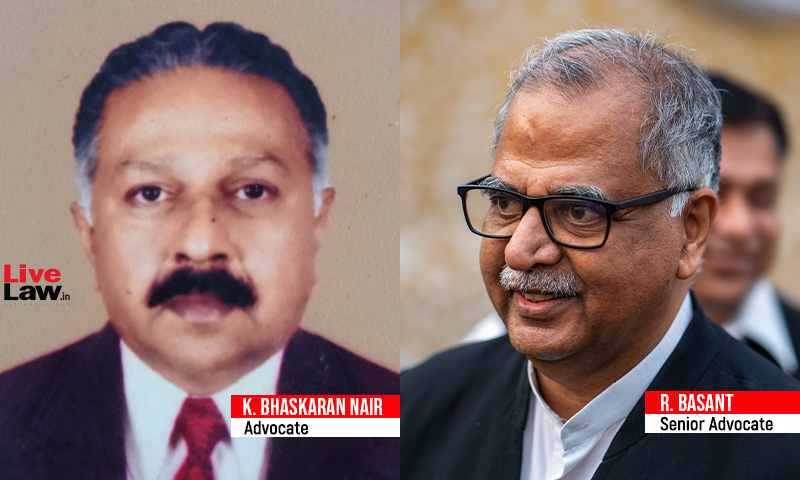 "As your father is in real life, your Senior is in your professional life." We juniors of Advocate K. Bhaskaran Nair (we are and call ourselves the KBN family) found this axiom in actual operation in our Senior's chambers. Sir upheld and maintained that legacy of the Calicut bar in the sublime relationship between seniors and juniors. I met my Senior first at the Chinmaya Gita...

"As your father is in real life, your Senior is in your professional life."

We juniors of Advocate K. Bhaskaran Nair (we are and call ourselves the KBN family) found this axiom in actual operation in our Senior's chambers. Sir upheld and maintained that legacy of the Calicut bar in the sublime relationship between seniors and juniors.

I met my Senior first at the Chinmaya Gita classes. Sir was an active founder member of the Calicut Chinmaya mission where some of us, as young college students of the Malabar Christian College, searching for the obscure meaning of life used to assemble. Sir with his abnormally big handsome face, bright and intelligent eyes, infectious loud laughter, the firm and authentic opinions that he had on almost all subjects, the courteous and dignified disposition to all and the love and affection which he displayed, instantly caught our eyes. It was admiration, reverence, respect and love all at first sight. Somehow, somewhere in my mind, a yearning to be like him in life - to emulate Sir, also started growing from day one.

When the Calicut Law College (Prof. Krishnan Nair was our first Principal) introduced the system of chamber attachment and court attendance, my Senior admitted me most happily to his chambers as an intern initially and later as a junior. I spent my most happy, useful, productive learning days there with Sir.

A lot of instances that happened in the chambers during that long period of association of about 6-7 years and thereafter also, crowd into my cranium as I attempt to recall my association with my Senior.

First of all, I think of my Senior as a junior. Oh, what a great junior Sir had been to his senior – Advocate K. Kunhirama Menon, the doyen of the Calicut Bar! Even at the height of Sir's prestige, fame and eminence, it was a pleasure to see Sir standing in front of his senior with humility, respect, reverence, affection, concern and love. That was itself a glorious lesson, for all of us.

Sir's love, affection and devotion to his mother was another dimension of his personality that we admired. Sir's widowed mother continued to live in their ancestral home in Calicut till her death. Almost every day, whatever may have been his professional and social commitments, Sir would spare an hour to go to and be with his dear mother. We saw another great quality worthy of emulation in Sir thus.

Sir was upright, bold and fearless always. Senior was always courteous and respectful before the bench. I remember one judge unnecessarily used to pick quarrels with Sir. Senior entertained an impression that the said judge was not upright, impartial or unbiased. My non-compromising Senior did not ever relent. Another judicial officer who used to play tennis in court campus with my Senior came to our office one day as an emissary from that officer. They were both talking in the closed room. Suddenly we heard the loud voice of my Senior coming out of the room.

"Settlement? Compromise? What do I have to settle and compromise? Go and tell your friend that lawyers argue and judges decide. They do not compromise or settle. Please tell him also that I have been practicing in this centre for the past three decades, in spite of many officers like him!"

It was an abject lesson of independence and fearlessness for all of us.

Sir had a great sense of humour. Apt words did always dance on his tongue. This particular judge kept on convicting my Senior's clients and passing adverse orders one after the other. I remember Senior appearing before the Sessions Court, practically every day with appeals and revisions against such orders. One day, when an appeal came up for admission before the District and Sessions Judge, Justice M.M Pareed Pillay, was our Sessions judge at that time, my Senior started with the words

"This is an appeal against the verdict of so and so court."

"My friend says that the judgment assailed is of … court; but he has other reasons also to advance."

The judge too had a hearty laugh.

He helped, defended, and encouraged junior lawyers. When some inexperienced judicial officers used to be harsh to the juniors, insult them unnecessarily and misbehave with them, we would request Senior to be in that court for some time. If any such instance came up, Sir would unhesitatingly get up and advise the judges that such conduct against junior members who are the hopes of the profession in future is not proper. Corrective dimension of advocacy was in full operation. Today operating at much higher levels in the hierarchy, I wish, my peers and I would show a fraction of that independence, fearlessness, and responsibility as officers of court exercising the corrective dimension jurisdiction of the bar.

Sir was a humane humanist to the core always. His ethical commitment to the less fortunate, underprivileged, and deprived, induced obviously by his earlier stint in life as an active political persona, continued till the very end. An incident lives in my mind always when I think of this dimension of Sir's personality. Sir maintained that commitment even when he was a fully involved busy professional.

We juniors would study the brief, discuss with the clients, make notes, and ultimately take the client to the Senior's room. Senior would have already read the papers. We would then discuss. That was the practice in our office. Those briefings were occasions when my Senior assessed the level of preparation and competence of the juniors. There was this client, an accused in a criminal case. He passionately maintained that he was absolutely innocent and was being prosecuted unnecessarily. He thought as he was innocent, he need not pay any fee for legal assistance rendered. We notified the Senior in confidence about this attitude of his - I am absolutely innocent, why should I pay any fee!

We all had a hearty laugh including the Senior. After discussions, the client went out of the Senior's chamber also without paying any fee. Senior did not mention anything to him. We were sort of confused and surprised. Then my senior said

"He feels justice is his birthright and we are all unnecessary middlemen."

But what really surprised us was the Senior's statement

"Don't ask for any fee from him. We will do it pro bono for him. Let at least one person live with that sublime fictional impression – that justice is his birthright and will go to him free – at no cost."

Juniors were always like family to him. Even after we left Sir's office and set up independent practice this continued. He would feel with his juniors and try to find solutions for their problems. It may not be proper to speak about the problems of some others but I remember that I faced difficulty to take a decision as to whether I should join the bench as a direct recruitee District & Sessions judge. Initially Sir discussed all aspects and told me that I can decide either way and Sir may not be able to take a decision for me. I remember that after much vacillation, I decided on the last day after having started from Calicut to proceed to Kochi for the swearing in ceremony that I am not joining and sent a letter to that effect to the Registrar. I returned from Guruvayoor to Calicut. When I went to meet Sir on the next morning, Sir told me

"Daredevil, I left the option to you but I never thought that you will ultimately decide against joining."

But Sir proceeded to give me confidence and advised me to remain focused in work and not to worry about any criticism that is bound to emerge. But surprisingly as destiny would have it, the High Court gave me another opportunity to join after the court reopened after summer recess of 1988. When I went to Sir again, I remember distinctly what Sir told me. Sir said

"I do not really know what advice to give you but I have to tell you if it were Raj (Sir's son) I would definitely have compelled him to join."

That statement altered the course of my life. I respected my Guru's words and joined as a District & Sessions judge. Even earlier, at the time of my marriage, at the time of the death of my father at a fairly young age, and on many other occasions, Sir was the tower of strength for me and for juniors like me.

Leelaeadthy, our Gurupathni, was the matriarch of our KBN family. Even today – two decades after Sir's death, visits to Calicut by we juniors remain incomplete and inadequate if we do not call on our dear Leelaeadthy at her house, Archana Calicut. We were all members of that nuclear family of Sir, Leelaeadthy, Usha and Rajiv.

Sir fell sick. Sir was very unhappy that my elevation as a judge of the High Court was not happening even after about 15 years. He was obviously upset. I could see that he was worried whether his advice to me was proving to be wrong. But I was elated and Sir was rapturously happy when I was eventually sworn in on 9/9/2002 as a judge of the High Court before Sir left for his heavenly abode on 01/10/2002, that very year - within three weeks of my swearing-in. Sir was extremely unhappy that Sir could not attend the swearing-in ceremony or the felicitation meeting held by the Calicut Bar Association which was attended by Justice KT Thomas, a judge whom my Senior really respected.

All juniors were his favorites but the testimonial that I always take pride in and cherish most is one statement by Sir when I went to call on him when he was terminally ill in September 2002. Sir was lying down. Usha, Sir's daughter, told Sir

"See, who has come, your favorite!"

He saw me and mumbled

"Favourite of the favorites."

Not my day, my life was made! The greatest and the most priceless award/appreciation that I ever earned in life and which I cherish most and remember every day, even now, is this testimonial from Sir.

Sir, the legend will continue to live in the minds of all his juniors till the end of their lives.

Author is a Senior Advocate practicing in the Supreme Court and a former Judge of the High Court of Kerala.