IBC - A Big Game Changer In Banking (Part I)

The introduction of IBC was termed as the most powerful weapon in the hands of the bankers to reduce the frightening level of non-performance assets. It is expected that IBC will change the game plan of NPA Management in Indian banking space. The main objectives of the code were time bound reorganisation, maximisation of value of assets, promotion of entrepreneurship, availability of...

The introduction of IBC was termed as the most powerful weapon in the hands of the bankers to reduce the frightening level of non-performance assets. It is expected that IBC will change the game plan of NPA Management in Indian banking space. The main objectives of the code were time bound reorganisation, maximisation of value of assets, promotion of entrepreneurship, availability of credit and balance interests of all stakeholders.

A diagrammatical representation of evolution of recovery laws is given below: - 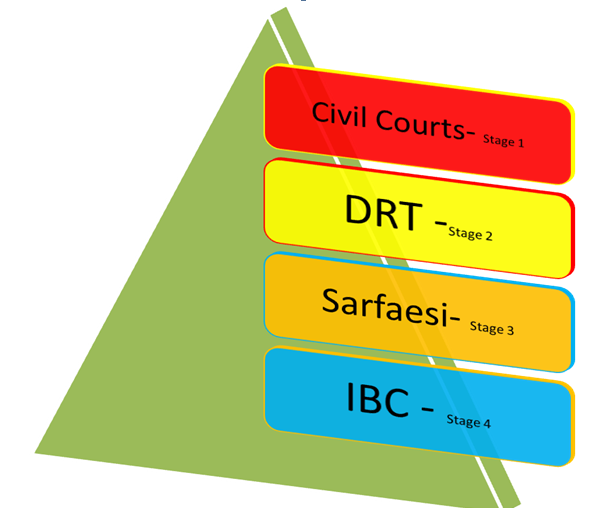 The evolution of recovery laws in banking sector can be grouped primarily into four basic stages. During stage – I, only remedy available with the Bankers was to approach the Civil Courts. During this period, Bankers were required to wait for long years to obtain decrees and execute the decrees. As the civil courts were piled up with large number of cases and no priority was accorded to bankers in adjudication, bankers used to receive decree after waiting for considerable period of time approximately 3 to 5 years. As a consequence of long delay, instances of security being diluted and disposal of security by the borrowers without banks knowledge became very common. Further, usual CPC procedures adopted in civil courts have also contributed in delay in getting decree of suits filed by Banks.

In Stage –II, Recovery of Debts Due to Banks and Financial Institutions Act (hereinafter referred to as DRT Act) was enacted with an objective to establish exclusive Tribunals to deal with the Bank's cases. The DRT Act was enacted after considering the reports of various committees and taking cognizance of the fact that as on 30-09-1990, more than 15 lakh cases filed by public sector banks and 304 cases filed by financial institutions were pending in various courts for recovery of debts amounting to Rs.6000 crores. The new legislation facilitated creation of specialized forums i.e., the Debts Recovery Tribunals and the Debts Recovery Appellate Tribunals for expeditious adjudication of disputes relating to recovery of the debts due to banks and financial institutions. Simultaneously, the jurisdiction of the Civil Courts was barred for amount of Rs. 10 lakhs and above and all pending matters were transferred from civil courts to the Tribunals from the date of their establishment. The DRT Act was renamed as the Recovery of Debts and Bankruptcy Act (RDB Act) vide amendment made on 28.05.2016 after the introduction of IBC. The Tribunals initially had teething problems but the Tribunals became active subsequent to judgement of Supreme Act wherein the constitutional validity of the Act was declared valid
[1] .

With the advent of the DRT Act, it was expected that most of the Non-Performing Assets (NPA) shall be easy to recover from defaulters. However, it was realised in due course that the enactment of DRT Act was not enough to fight the menace of the NPA's. The amount of recovery through DRT didn't show much enthusiastic progress despite the functioning of the full-fledged Debt Recovery Tribunals. There are many reasons for slow pace of recovery under RDB Act, but prime reasons were the procedural delay in DRT in disposing off cases and lack of required powers and skill on the part of the Banks/Financial Institutions to enforce the securities.

In Stage III, SARFAESI Act was enacted to enable the banks and financial institutions to realize long- term assets, manage problem of liquidity, asset liability mismatches and improve recovery by exercising powers to take possession of securities, sell them and reduce non-performing assets by adopting measures for recovery or reconstruction. The constitutional validity of Sarfaesi Act was decided by the Hon'ble Supreme Court in Mardia Chemicals v. Union of India and the validity of the SARFAESI Act was upheld except the condition of deposit of 75% amount enshrined in section 17(2).
[2]

Though, Sarfaesi Act enabled bankers to recover good amount of money, still due to multiplicity of litigations, inordinate delay in disposal of applications/appeals, bottlenecks in taking over physical possession of the secured assets, etc made bankers difficult to enforce the provisions of the Act in full effect. Result is that the recovery expected by enforcing SARFAESI, falls short of expectation.

Thereafter, the Govt. focussed attention to insolvency and bankruptcy laws. The Govt decided to consolidate the laws relating to insolvency and bankruptcy in India with an objective to allow credit to flow more freely in India and instil faith in investors for speedy disposal of their claims. The insolvency resolution process in India has in the past involved the simultaneous operation of several statutory instruments. These include the Presidency Towns Insolvency Act, 1909 and Provincial Insolvency Act, 1920, Sick Industrial Companies Act, 1985, the Securitisation and Reconstruction of Financial Assets and Enforcementof Security Interest Act, 2002, the Recovery of DebtDue to Banks and Financial Institutions Act, 1993,and the Companies Act, 2013. Broadly, these statutes provided for a disparate process of debt restructuring and asset seizure and realization in order to facilitate the satisfaction of outstanding debts. The multiple legal avenues and multiple layers of court system in India witnessed huge piling up of non-performing assets and creditors waiting for years at end to recover their money. The IBC consolidates existing laws relating to insolvency of corporate entities and individuals into a single legislation. The Code has unified the law relating to enforcement of statutory rights of creditor sand streamlined the manner in which a debtor company can be revived to sustain its debt without extinguishing the rights of creditors.

Though IBC, Sarfaesi, DRT and Civil Courts have got its own uniqueness in enabling the bankers to recover their dues, an attempt is made here to do a comparative analysis by touching upon the core fundamental competitiveness of the above said acts.

The biggest advantage of IBC is the paradigm shift in taking the possession of the assets from the corporate debtor to the creditors. This behavioural change has made phenomenon change in the prescription of the borrowers towards recovery laws. This new scenario has been aptly described by the former Finance Minister Arun Jaitley in his blog that IBC has changed the debtor-creditor relationship - creditor no longer chases the debtor - it is otherwise - those who drive the companies to insolvency, exit from management.

India is one of the youngest republics in the world, with a high concentration of the most dynamic entrepreneurs IBC may be the first act which recognizes the spirit of entrepreneurship. The economy of any country shall flourish only if it recognizes the spirit of entrepreneurship. The contribution of Silicon Valley in the growth of United States is immense and laudable. It is not surprising that most of the tech companies which rule the world today started their journey from the Silicon Valley.

In fact, Sick Industrial Companies Act (SICA) and Board for Industrial and Financial Reconstruction (BIFR) had been formulated to treat the liquidation of assets of the business only after it lost all its value. In stark contrast to such an approach, IBC has been formulated to treat the business of borrower as a going concern. IBC envisaged business continuity concept and moratorium was introduced to enable smooth transition of business. By rescuing viable businesses and closing non-viable ones, the Code releases the entrepreneurs from failure. It enables them to get in and get out of business with ease, undeterred by failure.

It is judicially accepted norm that in the matter of economic legislation, Courts will interfere only if it is absolutely necessary. IBC has recognised the concept of Judicial hands-off, which means lesser judicial interference. In IBC, it is interesting to understand that judiciary wing under IBC i.e.Adjudicating Authority has no role to play in approval or rejection of resolution plan- it is purely a financial decision to be taken by financial creditors. The role of judiciary is limited to judicial adjudication and not on credit related matters.

The concept of crown debts and its priority over banker's rights has been a debating issue for long in banking circle. The Bankers fought several rounds of litigation with govt/tax authorities for getting the priority rights. It is a relief for Bankers that IBC recognised their priority rights over government dues. Though section 31B of the Recovery of Debts and Bankruptcy Act and section 26 E of Sarfaesi Act accorded right of priority to bankers over government dues vide amendment made on 1.9.2016, we are yet to witness substantial progress in this regard. However, IBC has accorded not only priority rights to banker's but also accorded low priority to government dues in specific terms- unlike Companies Act, 2013 where govt dues are being paid alongside employees and unsecured financial creditors. Now, govt dues are being paid after secured creditors, unsecured creditors, employees, and workmen. IBC viewed Government only as a facilitator and regulator and not an active participant in the affairs of commercial entities.

The credit decisions to be made by Banks under IBC were instantaneous and quick compared to the time-consuming decisions bankers used to take during previous regimes. Going by the level of hierarchy in public sector banks, taking instantaneous decision is quitedifficult. Banks were forced to take quick calls on huge haircuts. However, it is amazing to see that even public-sector banks havelived up to expectations and deliver decisions within the given time frame of IBC.

The Code endeavours resolution of insolvency at the earliest, preferably at the very first default, to prevent it from ballooning to un-resolvable proportions. In early days of default, enterprise value is typically higher than the liquidation value and hence the stakeholders would be motivated to resolve insolvency of the firm rather than liquidate it. Therefore, it entitles the stakeholders to initiate Corporate Insolvency Resolution Process(CIRP)as soon as there is threshold amount of default.

IBC – Time is the essence

The Code mandates resolution in a time bound manner, as undue delay is likely to reduce the enterprise value of the firm. When the firm is not in sound financial health, prolonged uncertainty about its ownership and control may make the possibility of resolution remote. Time is the essence of the Code. It provides a mandatory timeline of 180 days for Committee of Creditors (CoC) to conclude CIRP, extendable by a one-time extension of up to 90 days.

One of the biggest challenge with respect to the litigation in India is the uncertainty over time period of disposal of cases. Though both DRT/Sarfaesi proceedings stipulated time limit for disposal of appeals/applications, but seldom it happens. The failure to comply with the time limit is reflected in majority of cases. It appears that the time bound resolution process under IBC is more realistic. IBC recognizes that speed is the essence of its proceedings. 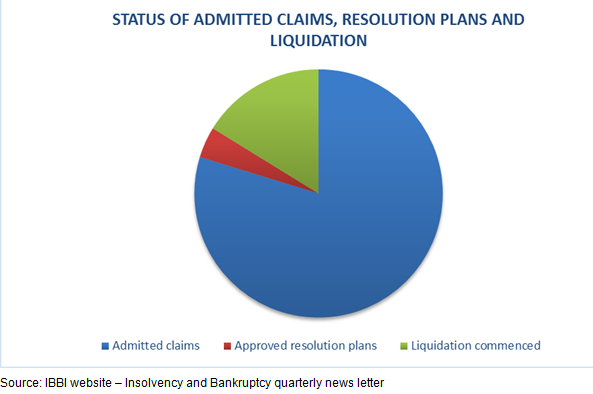 Under IBC, the financial creditors were given liberty to select better & efficient managers to run debtor company in stark contrast to previous regimes where the same borrower who has failed on multiple occasions have been given further chance to run the company. The Sick Industrial Companies (Special Provisions) Act, 1985 which made provision for rehabilitation of sick companies and repayment of loans availed by them, were found to have completely failed.

The author is serving in State Bank of India. The views expressed by the author are only personal.