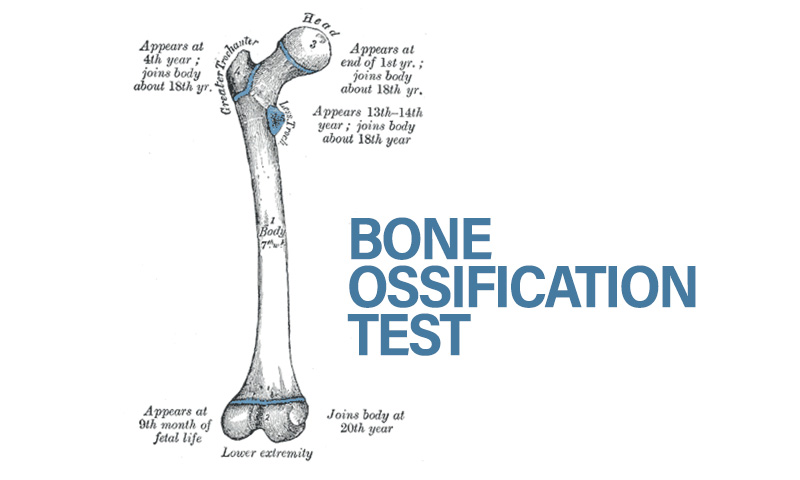 Famous American philosopher Mark Twain once said, "Age is an Issue of Mind over matter. If you don't mind, it doesn't matter." But this is not the case in criminal jurisprudence when it comes to age. Here, age matters because law is mindful to it. When we talk about Indian scenario, then both criminal and constitutional courts have remained reluctant to rely on bone ossification...

Famous American philosopher Mark Twain once said, "Age is an Issue of Mind over matter. If you don't mind, it doesn't matter."

But this is not the case in criminal jurisprudence when it comes to age. Here, age matters because law is mindful to it.

What Is Bone Ossification Test:

It is an age determination test of a person on the basis of assessment of his or her bony frame work . This test enables one to form a fairly accurate opinion about the age of an individual, especially in earlier years. This is a cumulative evaluation of bone, fusion of bones, teeth, height, weight and other corelated bodily parameters.

Bone age is calculated through ossification tests, which are conducted to examine the fusion of bones under radiological guidance and supervision. In layman language, it may be said that a radiologist makes his opinion about age of subject with the help of X-rays or CT- scans of bones. But this is not as easy because it is difficult for the concerned expert to maintain uniformity. The bony structure differs from man to man due to variation in climatic, dietetic, hereditary and other geographical factors.

According to DR. H.S. Mehta in Modi's Medical Jurisprudence, in ascertaining the age of young persons, radiograms of several main joints of the upper or the lower extremity of one or both sides of the body should be taken. The opinion made thereafter is a fairly close estimate but with a margin of two years on both side, mainly on the progress of the epiphyseal union. He also emphasised that due weightage to physical and sexual characteristics should also be given.

Why Ossification Test Is Required.

The bone ossification test is required to determine the age in order to fix the criminal liabilities. The law treats the persons differently based on their age. Minors in every part of world are seen as a vulnerable section and need protection of law. When the minor is offender, he is treated with leniency. But when victim is minor then the offender is treated with heavy hand. Hence it becomes essential to find the exact physical age of concerned person. The legal provision which helps the court regarding the age of person who claims minor is section 94 of The Juvenile Justice (Care and Protection of Children) Act 2015. The relevant portion of the section is constructed as:

(ii) the birth certificate given by a corporation or a municipal authority or a panchayat;

(iii) and only in the absence of (i) and (ii) above, age shall be determined by an ossification test or any other latest medical age determination test conducted on the orders of the Committee or the Board:

So, it is clear from the language of section 94(2)(iii) (read with Rule 12 of the JJ Rules, 2007), that only in the absence of birth certificate from school or municipal corporation or matriculation certificate, a medical opinion is to be sought from a duly constituted Medical Board that will declare the age of the juvenile or child. In the presence of documents mentioned hereinbefore, the bone ossification test cannot be done or relied upon. It means the legislature has given the preference to documentary evidence than medical evidence (Bone ossification test here) while determining the age of a person under question.

The position which has been settled by courts in India is that the bone ossification test is not conclusive in nature and courts take it only as an advisory opinion. The reason given by court may be accepted to certain extent because ossification test is not the exact science that can provide the accurate age of a person. As discussed above, the individual factors such as growth rate of bones, skeletal structure can affect the accuracy of this methodology.

In Vishnu vs State of Maharashtra, the court held that the bone ossification test cannot overrule the ocular or documentary evidence to support or contradict the age of accused person.

In infamous Nirbhaya gang rape case, the age of the accused was 17 years and six months according to his birth certificate and other school documents. Police requested the court to conduct ossification test. But the court refused the plea and held that it cannot permit the test in presence of a positive evidence such as birth certificate.

Furthermore, the bone ossification test is a double-edged sword for prosecution because benefit of doubt is given to accused. In Shweta Gulati vs NCT of Delhi (2018), Delhi High Court came across a bone ossification report that had estimated age of victim as 17 to 19 years. The Court held:

As no document of age was available, the age has been determined by the Child Welfare Committee as 17 years based on the ossification report. The bone ossification test report has estimated the age as 17 to 19 years. So, applying the margin of error principle, of two years on either side, the age could be between 15 to 21 years. In the present case even if the margin of error is not taken on the higher side, the upper limit of the age estimated by the ossification test is 19 years. (Emphasis Supplied)

For a long time, section 94 of JJ Act prohibited the courts to rely upon the bone ossification test in presence of birth certificates issued from various authorities. Although, it is correct that scientific tests are subject of strict scrutiny and these should not be taken into consideration when the other documentary evidences are in stark contravention. But the approach to minimise the role of bone ossification test in presence of birth certificate is devoid of logic. There is possibility that the age determined by scientific method is different to the documentary age. In that case, would it be appropriate to wholly rely on the documentary evidence for age determination when judicial notice of this fact can be taken that it is quite easy to get a certificate of birth in India by bribing or manipulating the facts. Moreover, with advent of scientific technology, it seems unrealistic to disbelieve the ossification test when the bonafides of birth certificate are dubious.

But, courts in India now have started to take cognizance of the fact that the bone ossification test is not a mere formality. It can be given due importance even in presence of birth certificates of person under question.

In Rishipal Singh Solanki vs Stateof Uttar Pradesh, (2021), Supreme Court observed explicitly that section 94 of JJ Act 2015, does not give precedence to the matriculation and another certificates, to determine the age of person, since the said section only deals with the matter of procedure.

Court held that lex non cogit ad impossibilia (law does not demand the impossible) and when the ossification test cannot yield trustworthy and reliable results, such test cannot be made a basis to determine the age of the person and other available certificates may be taken into consideration.

Similarly, in the case of RamVijay Singh vs State Of U.P (2021), Supreme Court held that the procedure as contained in Rule 12(3)(b) of the Rules is now part of Section 94 of the Act. Therefore, once the statute has provided ossification test as the basis of determining juvenility, the findings of such ossification test cannot be ignored.

In Arnit Das v. State of Bihar (2000) 5 SCC 488, it was observed that the Court should not take a hyper-technical approach while appreciating evidence for determination of age of the accused. If two views are possible, the Court should lean in favour of holding the accused to be a juvenile in borderline cases. This approach was further reiterated by this Court in Rajendra Chandra v. State of Chhattisgarh (2002) 2 SCC 287, in which it laid down that the standard of proof for age determination is the degree of probability and not proof beyond reasonable doubt.

It is true that documentary evidence is best evidence and if such document is authentic and trustworthy, nothing can replace it. The bone ossification test after all is a scientific examination having proved margin of error attached with it. Top court of India at several occasions has refused to accept the bone test to determine the age of accused or victim when other documentary evidences are available to prove the same. But advanced technology in the field of radiological sciences has paved a way for expert to conclude the age of subject more precisely and thus in such circumstances the value of such tests cannot be denied. When the birth certificate is unreliable, then court should give more and conclusive weightage to bone test subject to proper judicial scrutiny.