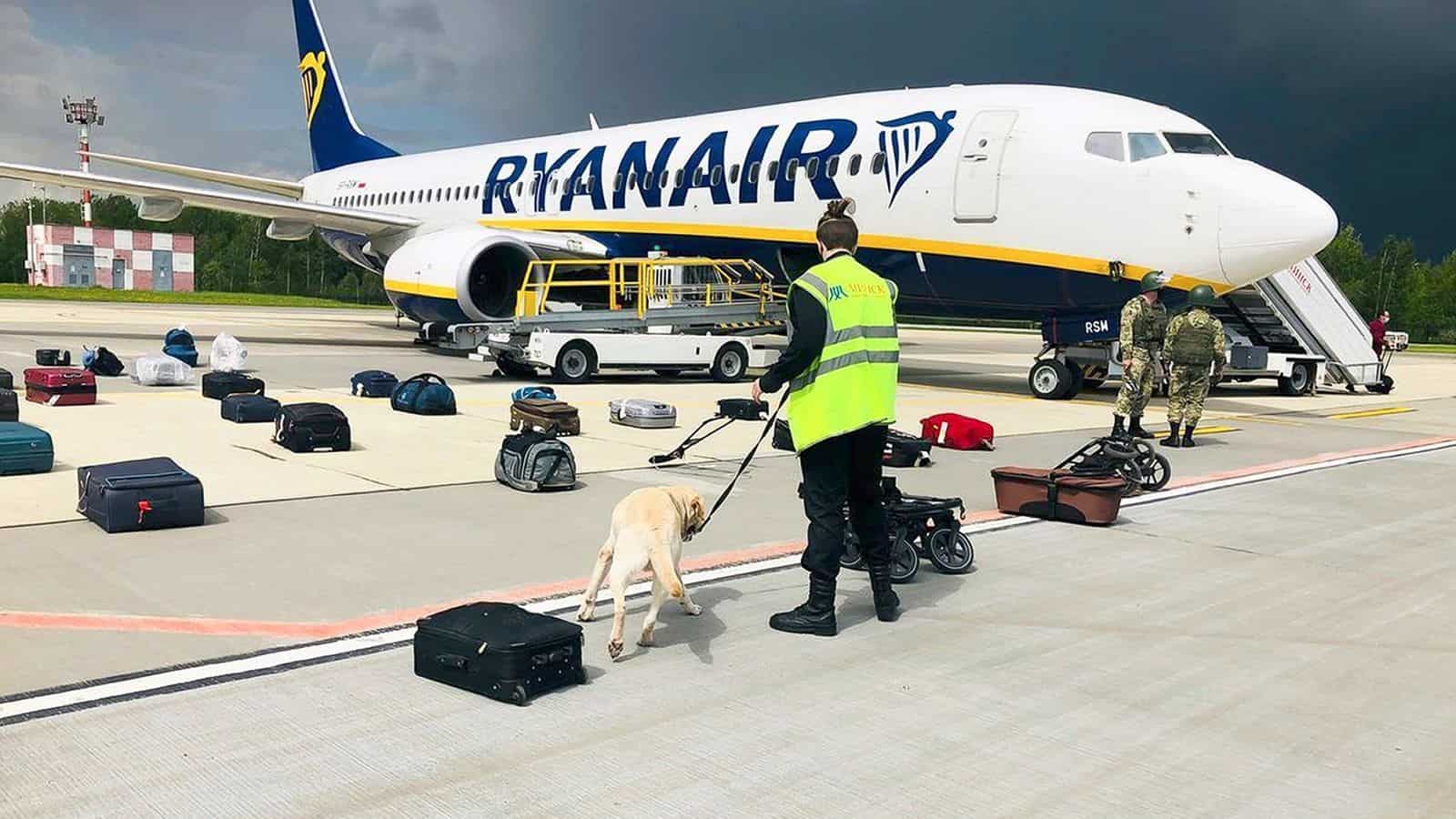 In May 2021, Ryanair flight 4978 was enroute Athens (Greece) to Vilnius (Lithuania). While transiting over the Belarusian airspace, air – traffic controller informed the crew that there was a bomb on board and asked them to land. Within moments, a Belarusian MiG 29 fighter jet intercepted the flight and directed it to land in the capital city of Minsk. There was no alleged bomb found...

In May 2021, Ryanair flight 4978 was enroute Athens (Greece) to Vilnius (Lithuania). While transiting over the Belarusian airspace, air – traffic controller informed the crew that there was a bomb on board and asked them to land. Within moments, a Belarusian MiG 29 fighter jet intercepted the flight and directed it to land in the capital city of Minsk. There was no alleged bomb found in the aircraft; however, on board was a passenger namely Roman Protasevich – a Belarusian journalist and anti – regime activist, who had been instrumental in organising protests against the incumbent President Lukashenko. The real reason behind the forced landing of the civilian aircraft became clear when Roman Protasevich was arrested and bundled away.

The incident sparked worldwide outrage and condemnation by leaders and international organizations alike. An Irish aircraft, registered in Poland, flying between two EU nations, was forced to land in its capital by a non – EU nation. Use of MiG 29 put the safety of hundreds of passengers at risk, only to arrest one of the passengers. When the aircraft was diverted, it was closer to Vilnius than to Minsk. If safety of passengers was really the concern, Belarus would have allowed it to quickly land in Vilnius. From the perspective of international aviation law, these tactics seem nothing short of hijacking. Important issues such as international airspace and right of airlines to fly over a foreign airspace need insight, within the overall perspective of international law.

The foremost regime is the network of treaties governing international civil aviation, namely the 1944 Chicago Convention on International Civil Aviation and the 1971 Montreal Convention for Suppression of Unlawful Acts Against the Safety of Civil Aviation, to both of which Belarus is a party. Article 1 of the Chicago Convention provides that a state has "complete and exclusive sovereignty over the airspace above its territory." When flying over a nation's airspace, civilian aircrafts are subject to full jurisdiction of that state. However, Article 3 bis (a) of the Convention specifies that "in case of interception, the lives of persons on board and the safety of the aircraft must not be endangered." Also, Appendix 2 of the Convention also stipulates that interception should be used as a last resort. So, the interception of Ryanair aircraft by fighter jet and forcing it to land at a more distant place potentially endangered the lives of crew and passengers.

Article 1(e) of the Montreal Convention states, "Any person commits an offence if he unlawfully and intentionally communicates information which he knows to be false, thereby endangering the safety of an aircraft in flight." Further, as per Article 10(1) of the Convention, "contracting states shall, in accordance with international and national law, endeavour to take all practicable measure for the purpose of preventing the offences mentioned in Article 1." It can be safely surmised that by forcing an aircraft to land on the pretext of a fake bomb hoax, Belarus stands in violation of Montreal Convention as well. Contents of Article 10(2) of the Convention reveal an interesting proposition, stating "when, due to the commission of one of the offences mentioned in Article 1, a flight has been delayed or interrupted, any Contracting State in whose territory the aircraft or passengers or crew are present shall facilitate the continuation of the journey of the passengers and crew as soon as practicable, and shall without delay return the aircraft and its cargo to the persons lawfully entitled to possession." As per this provision, Protasevich should be released from custody and allowed to proceed towards the intended flight destination, Vilnius.

The aspect of detention is also questionable under the settled canons of international law. Protasevich, despite being a Belarusian citizen, was detained on the territory of Poland, as the flag state of the aircraft, which was still in transit. By this logic, he was protected by the European Convention on Human Rights. Belarus is not a party to the treaty but Poland is. In the past, the European Court of Human Rights has found the Convention applicable to aircrafts and ships registered or flying the flag of a member party. The onus is on Poland to initiate diplomatic and legal steps to secure release of Protasevich.

Can Belarus be brought to the book?

Poland, Ireland or other member nations of Montreal Convention may initiate a case against Belarus before the International Court of Justice (ICJ). Article 14 of the Montreal Convention deals with the issue of dispute resolution. Article 14(1) provides for any dispute as to the interpretation or application of the Convention, that cannot be settled by negotiation, to be submitted to arbitration at the request of any of the parties and, if such arbitration cannot be organised by agreement of the parties within six months, to be referred to the ICJ by any of the parties. However, Belarus has declared that it does not consider itself bound by this provision, as it is explicitly entitled to do under Article 14(2). However, this does not mean that the states invoking Belarussian responsibility cannot determine that Belarus has become responsible for a breach of the Convention, and thus resort to countermeasures.

Belarus has not insulated itself against Article 87 of the Chicago Convention, which provides that any dispute under this treaty can be referred to the Council of the International Civil Aviation Organisation (ICAO) – the UN body charged with civil aviation, and any decision of the body can be subject to an appeal before the ICJ. As discussed earlier, Belarus appears to have violated this Convention as well. Poland or other member states are within their rights to commence proceedings against Belarus. It is pertinent to note that all members of the UN are ipso facto parties to the ICJ Statute, and thus 'accept' it. Consent to the jurisdiction of the Court is given by means of their consent to the Chicago Convention and its Article 84.

Poland, as the flag state of the aircraft, is entitled to reparation from Belarus. The Permanent Court of International Justice, the forerunner of the ICJ, gave a significant ruling in the Chorzow Factory case (1927) wherein inter alia, it observed that reparation is to be made for violations of international law. It was held that "reparation must, as far as possible, wipe out all the consequences of the illegal act and re - establish the situation which would, in all probability, have existed if that act had not been committed." The affected parties may also explore grounds for international human rights violations beyond the civil aviation aspect.

One reason for expanding their scope of punishing Belarus also stems from an apprehension that international law lacks compulsory dispute settlement and enforcement mechanisms. International law is rooted in ideals of voluntarism, cooperation and various treaties expect member nations to regulate themselves. There have been calls to include aviation treaties in the post second world war international trade treaties, as their breaches would be subject to World Trade Organisation's dispute resolution mechanism. However, the mechanism is slow, and is primarily aimed at dealing with disputes related to international commerce and not blatant mid –air hijackings.

The incident has already invited severe criticism and backlash from major nations. Most importantly, the EU has termed the actions as "piracy" and "hijacking". It has announced re – imposition of economic and other sanctions which were placed earlier in 2020. Sectors such as potash and oil, important to Belarus, may also be targeted. NATO, alongwith EU, has also proposed stoppage of international flights over Belarus. UK has already stopped its flights over it and has denied Belarusian flights permission to land on its airports. USA has also responded with strongly worded criticism and has called for international enquiries and collective action.

Sanctions have become an integral tool of foreign policy. However, they may have unintended consequences as well. Targeted governments can use the sanctions as a rallying cry at home, against the imposing nations, and gain their fading popularity back, as seen in case of Iran and Venezuela. Sanctions can also help adversaries to advance their interests abroad. There is also a danger of escalation. Sanctions result in counter – sanctions and indirect retaliation, in forms of consumer boycotts, cyber attacks and misinformation smear campaigns. Another danger is the long term isolation of the targeted country and their efforts to reduce their economic dependence on western and other sanctioning nations. The more sanctions are used, the more their target nations will look for alternate methods to safeguard themselves from their impact.

Although restricted due to Covid-19, air travel is a central part of international economic order, just like international shipping. Though the actions of Belarus shall have to be dealt more politically than legally, international community should not shy away from putting Belarus in the dock. If ignored, such acts may become regular, thus leading to grave repercussions. It is upto the custodians of international law to not encourage a new order – where piracy starts in the air instead of high seas – and the targets are dissenters, protestors and individuals, instead of gold.

The Authors are are practising Advocates.