Understanding 'Use Of Force', In Context Of Ukraine-Russia 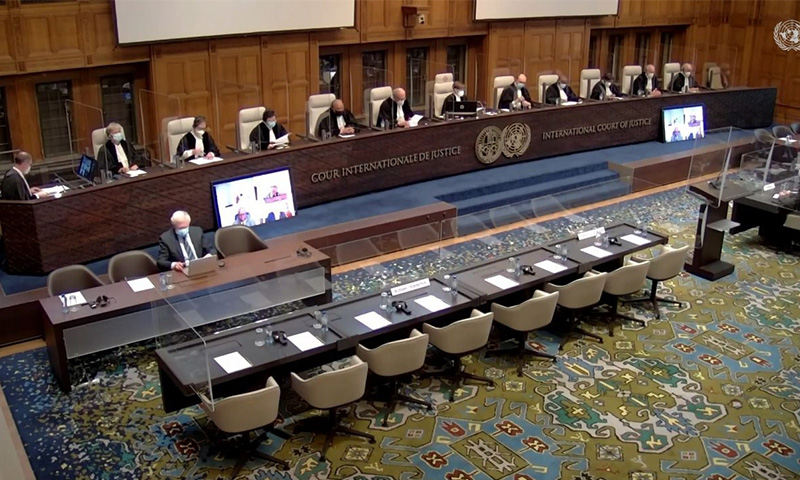 In its public hearing the International Court of Justice (ICJ) recently indicated that Russia must immediately halt the military operations against Ukraine while expressing profound concern, about Moscow's use of force in violation of international law. The judges voted 13-2 in favour of this. Previously, when the ICJ had updated its website, to include the submission it received from...

In its public hearing the International Court of Justice (ICJ) recently indicated that Russia must immediately halt the military operations against Ukraine while expressing profound concern, about Moscow's use of force in violation of international law. The judges voted 13-2 in favour of this.

Previously, when the ICJ had updated its website, to include the submission it received from the Russian Federation. Inter alia one of Russia's major arguments is that the Court lacks jurisdiction over the issue of 'use of force'.

While delivering the ruling, the ICJ President Joan Donoghue of the United States stated that necessary conditions regarding jurisdiction were met and commented upon the loss of lives and the harm it will cause on the environment, "Indeed, any military operation, in particular one on the scale carried out by the Russian Federation on the territory of Ukraine, inevitably causes loss of life, mental and bodily harm, and damage to property and to the environment".

When the League of Nations failed to prevent World War II, leaders of the world created a much stronger San Francisco Charter in 1945, also known as the UN Charter.

Article 2(4) All members shall refrain in their international relations from the threat or use of force against the territorial integrity or political independence of any state, or in any other manner inconsistent with the purposes of the United Nations.

There are exceptions to Article 2(4) of the UN Charter, which are Articles 42, 43, 51 and principles of humanitarian intervention & responsibility to protect.

Article 42 states, that if measures not involving the use of armed forces (economic relations, etc), are inadequate then the Security Council may consider "action by air, sea, or land forces as may be necessary to maintain or restore international peace and security". Article 43 continues that Security Council may undertake special agreement/ agreements necessary for the maintaining of international peace and security.

Article 51 states that Members of the UN have an inherent right to individual and collective self-defence. In fact, several times, the members have used Article 51, "if an armed attack occurs against a Member of the United Nations, until the Security Council has taken measures necessary to maintain international peace and security" to legitimise their military invasions.

With the inception of the UN Charter, there was a naïve hope that the Charter would reduce/curb military invasions but since then, there have been various instances where States have flouted this law. In the last few decades there have been a series of questionable military invasions and depending on which side one is on; some were supported, and some were criticised. Since 9/11, 'use of force' against non-state actors has also become common, but is it accepted?

While addressing that the US led war in Iraq as illegal, Kofi Annan (former UN Secretary General) also said, "No principle of the Charter is more important than the principle of the non-use of force as embodied in Article 2, paragraph 4 .... Secretaries- General confront many challenges in the course of their tenures but the challenge that tests them and defines them inevitably involves the use of force."

During the First Libyan Civil War, via Resolution 1973 the Security Council remained "actively seized on the matter". However a coalition of 19 states under the leadership of North Atlantic Treaty Organisation's (NATO), decided to negate the sovereignty of Libya under Article 2(4) and fired missiles, undertook naval blockades and launches air strikes against the Libyan army.

In Syria, United States Senate Joint Resolution (S.J.Res. 21) authorized President Barack Obama to use the American military to intervene in the ongoing Syrian Civil War against ISIS. United Kingdom and France also joined this mission under the aegis of "responsibility to protect" the civilians. One must notice, the United States acted against ISIS a non-state actor, but in doing so, it also violated Article 2(4) of the UN Charter. However, many have argued that the act was 'illegal but legitimate'. In the situation in Kosovo too, use of force by several NATO members was considered justified on the basis of legitimacy and not legality.

In our own country, post the Pulwama attack in India, India in an act of "self-defence" also attacked non-state actors in a foreign state, while intruding its territory.

In The Case Of Ukraine And Russia

In the last week of February, Russia threatened international peace and security, by using force against a sovereign nation. Russia's aggression is a reminder of past such instances where the United States, NATO, etc also flouted Article 2(4) of the UN Charter.

Under the garb of genocide against the people of Donetsk and Luhansk, Russia authorised 'special military operation' against Ukraine which has been going on for 4 weeks now, with no end in sight. Few days after that, Ukraine approached the International Court of Justice to institute proceedings against Russia under the Genocide Convention. In response, while refusing to participate in these proceedings, Russia submitted to the ICJ that it lacks jurisdiction under the issue of 'use of force' as it falls outside the extent of Genocide Convention and is also does not fall under Article IX of the Convention.

Russia's defence is self-defence under Article 51 of the UN Charter.

The ICJ indicated provisional measures against Russia - to immediately suspend military operations in the territory of Ukraine.