'Despite repeated calls, the counsel for the applicant did not appear.' These words appear way too often in orders passed by the District and Sessions Courts at Patiala House Court Complex in New Delhi. The applicants in these cases, whose plea for justice goes unheard due to the absence of their lawyers, are prisoners seeking bail to protect themselves from the COVID19 infection....

'Despite repeated calls, the counsel for the applicant did not appear.'

These words appear way too often in orders passed by the District and Sessions Courts at Patiala House Court Complex in New Delhi. The applicants in these cases, whose plea for justice goes unheard due to the absence of their lawyers, are prisoners seeking bail to protect themselves from the COVID19 infection.

Prison complexes are extremely susceptible to the spread of novel coronavirus, which makes prisoners a vulnerable section. This fact has been recognised by both the Supreme Court as well as the Delhi High Court in a series of matters. In fact, the apex court took a suo moto cognisance of this issue and directed the Delhi Government to constitute a High Powered Committee to look into the matter.

The High Powered Committee, thus constituted by the Delhi Government, has passed a series of directions to decongest the prisons by easing the process of releasing certain kinds of prisoners on interim bail. These directions have time and again increased the relaxations, as per the information given by the Director General of Prisons, to make it easier for prisoners to seek bail.

In Shobha Gupta v. GNCTD, the Delhi High Court had issued guidelines which were supposed to be followed by the subordinate courts while addressing urgent bail applications.

However, the reality on the ground is far from satisfactory. It has appeared in multiple orders passed by the judges in the Patiala House Court that lawyers appearing for the prisoners did not turn up for the bail hearing despite multiple calls. This absence jeopardizes the relief sought by the prisoner as the matters get adjourned to a farther date without even addressing the preliminary arguments on urgency of the relief sought.

Another disturbing trend that haunts the bail hearings in trial courts is the absence of the Investigating Officer. Many bail matters are getting adjourned to a longer date either due to the absence of the IO or due to incorrect/insufficient status reports. 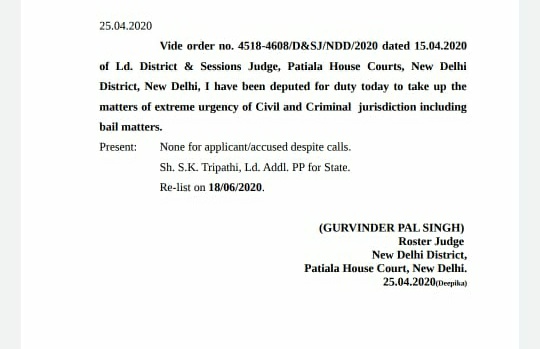 A sample of the orders passed while adjourning bail hearings.

One of the trial court lawyers, Mr Abhimanyu Dhawan, informed LiveLaw that in the bail hearing he was appearing for, the Investigating Officer produced the status report for some other case.

'Considering the experience of the officers and the nature of their jobs, it was hard to believe that an IO would make such a mistake inadvertently. What if the same was done to delay the matter', Mr Dhawan said.

Both the Delhi High Court, as well as the Patiala House Court, have directed the district court complexes to enable hearings through video conferencing. Apart from this, court complexes are also open for those who cannot avail such online facility.

In light of these facilities, it becomes hard to fathom as to why lawyers or police officers would not turn up for hearings which are accepted as 'urgent' by the court's registry. It frustrates the urgency of the relief sought by the prisoner and exposes him to further vulnerability of catching coronavirus.

Such delays not only defeats the idea of decongestion of prisons, as envisaged by the Supreme Court and the High Court, but also overlooks the gravity and urgency of the concerns raised by the prisoners. These bail applications which simply get adjourned due to the unexplained absence of the officers of the court, might be carrying concerns such as the applicant's acute medical conditions or the socio-economic distress of the applicant's family.

In addition to these concerns, there's a lingering issue of inadequacy in court orders. Despite being public documents, these orders do not record the reasons for the absence of either the lawyer or the Investigative Officer, rendering the process opaque for public scrutiny.

Court orders also do not address the factual details of the cases that simply get adjourned due to the highlighted absence. As a civil society, we are systematically alienated from the genuine concerns of the prisoners, and evaluating them to hold the authorities accountable.

More often than not, judges have also not taken any coercive action either against the absent advocate or the police officer, for non-appearance or producing incorrect documents. It's hard to even gauge the nature or gravity of these mistakes - whether they are inadvertent or intentional.

The cause of justice cannot be taken for granted; especially when it concerns the vulnerable sections that rely heavily on institutional efficiency. Chief Justice DN Patel of the Delhi High Court, has categorically stated that doors of justice cannot be shut even during this extraordinary crisis.

Authorities have to take cognisance of this issue. The Administration and Supervising Committee of the Delhi High Court shall issue directions to the subordinate courts to look into this matter and ensure that nobody is denied justice due to the lazy attitude of officers of the court.

In addition to that, the Delhi State Legal Services Authority must ensure that the lawyers who are appearing for the prisoners are attending the court proceedings, either through video conferencing or in person, on the designated date.

Trial courts are the foundations of the criminal justice system. The inefficiency in their functioning, or in the services of the officers who appear before these courts, would lead to an actual and irreconcilable perversion of justice.