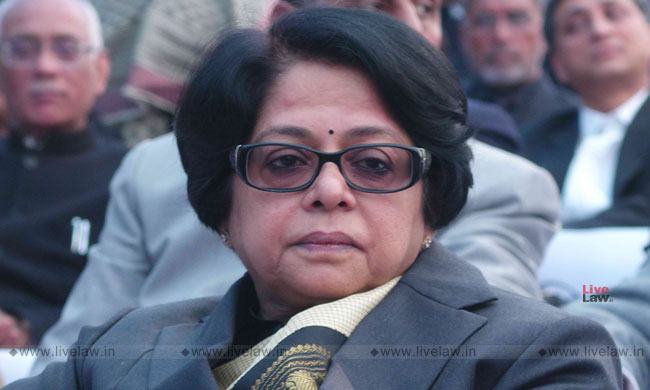 It was a morning in 2007, an article caught my attention. 'Lady lawyer pierces glass ceiling' said the Times of India. That 'lady lawyer' was Indu Malhotra and she was only the second woman ever in the history of the Supreme Court to be designated a Senior Advocate. The other had been Justice Leila Seth in 1977, who had retired as a Chief Justice of the Delhi High Court. By contrast...

It was a morning in 2007, an article caught my attention. 'Lady lawyer pierces glass ceiling' said the Times of India. That 'lady lawyer' was Indu Malhotra and she was only the second woman ever in the history of the Supreme Court to be designated a Senior Advocate. The other had been Justice Leila Seth in 1977, who had retired as a Chief Justice of the Delhi High Court. By contrast there were hundreds of male-lawyers who have had this honor bestowed on them. It was over 30 years since Leila Seth had been made a Senior Advocate.

It was unsurprising that Justice Malhotra had been designated a Senior Advocate, she had a busy law practice, maintained the highest standards of integrity, mentored young lawyers and lived in the service of the law. She had a calm, thoughtful and precise manner. Just like a deft Jedi, Senior Counsel Malhotra in court knew when to strike and when to hold back.

Those who break one glass ceiling, invariably break others. On April 26, 2018, she was elevated directly from the bar to the judiciary of the apex court. Again, a worthy honor but also simply a suitable appointment for stellar candidate. She is among a handful of senior lawyers to have been elevated directly to the apex court. Yes, she is also the first woman from the bar to have this distinction.

It's an odd thing the terminology 'woman lawyer' or 'lady advocate'. After all, why should a professional occupation have a gender tag? Likely since there are so few 'women' judges, 'women' senior advocates and 'women' who argue cases. It is an unfortunate tag, for women at the bar and on the bench would quite simply like the freedom to be considered adept practioners of the law and not be thought of as special for doing so. However, the reality is that the law has been a bastion for men. Lawyers like Malhotra deftly rode into that bastion and made it their own. By doing so, she inspired generations of lawyers - male and female alike- to understand that the legal profession including the judiciary belongs to all of us. She inspires me.

Born on 14 March, 1956 to Om Prakash Malhotra, a distinguished Senior Advocate and Satya Malhotra, Indu was their youngest child. She would study Political Science at Lady Shriram College, and then pursued the law at the Campus Law Centre, at the University of Delhi. She enrolled as a lawyer in 1983, and in 1988 she qualified as an Advocate on Record in the Supreme Court. She secured the first position in that competitive exam.

She built a fine law practice, mostly at the Supreme Court, but also argued at other fora. She argued cases spread across the legal spectrum. All great lawyers have an area of particular fondness. Her artistry was in the area of commercial arbitration. Precise, prepared and adept in that wonderful interplay where commercial law meets the contractual domains and all other ancillary legal sub-groups, Malhotra would shine, just as she did in court. Her fame in the area spread far and wide. She also authored a treatise on the Law and Practice of Arbitration and Conciliation, published in 2014.

But, it was not just her formidable legal skill that distinguished Malhotra. For me, it is also her integrity. While one saw this in the probity she bought to her professional life as a lawyer, it was also on display while she was a judge at the bench. Great judges are not ones you necessarily always agree with, but they have the courage of their legal and jurisprudential convictions to author dissents. Justice Malhotra's dissent in the Sabarimala case, which pertained to access for women into the temple, is not one I agree with, But, it is in the tradition of a great dissent – well reasoned and grounded in firm jurisprudential analysis.

It was this strength of conviction and elegant reasoning that she would bring to her concurring opinion in Navtej Singh Johar v Union of India, the decision where the Supreme Court found for the constitutional rights of LGBT Indians. Here, Justice Malhotra also wrote that "history owed LGBT Indians and their families an apology for their treatment." It is a line that has become part of the popular culture of constitutional freedom in India.

It is unfortunate that Indian judges have a particularly young and inappropriate retirement age of sixty-five years. Given modern day life spans, it needs to be thought afresh. Making the age of retirement seventy years is a far more appropriate age. In Justice Malhotra's case, we in the bar would have loved to have her on the bench for many years more.

But, in her retirement, this serial glass ceiling breaker, will no doubt go on to scale further heights, perhaps in the world of commercial arbitration or other fields. I for one would love for her to also consider writing a memoir. Perhaps she could title it, 'How I broke every glass ceiling and inspired generations of lawyers'.

Thank you being our trail blazer Justice Malhotra. Wishing you many more glorious years in the service of the law. Perhaps the most exciting part of your journey begins now

Author is a Senior Advocate, designated by the Supreme Court