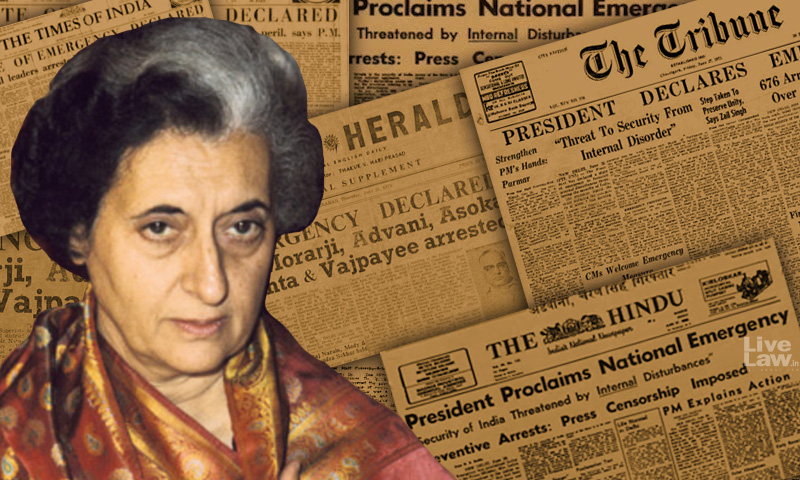 A recent book titled " India's First Dictatorship : The Emergency 1975-77 " by Christophe Jaffrelot and Pratinav Anil, sets out how the Judiciary Capitulated - Or Resisted - During the Emergency. This article seeks to highlight, a brave judgement delivered by Justice Sesha Iyengar Rangarajan of the Delhi High Court in a writ petition filed on behalf of the journalist Kuldip Nayar,...

A recent book titled " India's First Dictatorship : The Emergency 1975-77 " by Christophe Jaffrelot and Pratinav Anil, sets out how the Judiciary Capitulated - Or Resisted - During the Emergency.

This article seeks to highlight, a brave judgement delivered by Justice Sesha Iyengar Rangarajan of the Delhi High Court in a writ petition filed on behalf of the journalist Kuldip Nayar, father of Shri Rajeev Nayyar Senior Advocate.

I would like to elaborate on this, since I have been connected with several of the key people involved in those habeas corpus cases. My father the late H Y Sharada Prasad, was information advisor to both Indira and Rajeev Gandhi, throughout their tenures as Prime Minister.

My maternal uncle KS Radhakrishna, head of the Gandhi Peace Foundation, was the closest aide of Lok Nayak Jaya Prakash Narayan. JP was arrested from Radhakrishna's residence on the night of 25-26 June 1975.

Even though there was a warrant for his arrest too, my uncle managed to slip away from under the very eyes of the police, who were concentrating on putting JP into his car.

For several months, he travelled all over the country, coordinating resistance with several Gandhian Sarvodaya workers.

However, after several elderly relatives, and even innocent neighbours, were harassed to reveal his location, Radhakrishna surrendered to the police to spare them from further harassment. But we family members did not know where he had been taken.

By a lucky twist of fate, these habeas corpus pleas in the Delhi high court came up for hearing before Justice Sesha Iyengar Rangarajan, who was a relative - he was from the same extended family as my mother.

Or maybe it was not a coincidence. It is quite possible that the chief justice of Delhi high court, Justice TVR Tatachari, who was another relative of my mother ( Radhakrishna, Rangarajan, Tatachari all came from the same small subsect of Iyengars ) might have assigned these habeas corpus pleas to justice Sesha Iyengar Rangarajan.

My maternal uncle KS Radhakrishna was produced in handcuffs in the court of justice Rangarajan, which is how the family members came to know that he had been jailed in Tihar Jail.

Justice Rangarajan ordered that all prisoners in Tihar jail be given weekly medical examinations and permitted visits from family members once a week. These medical examinations were conducted every Thursday by Dr JK Jain of the RSS, who also brought them the latest political news.

Our relative Justice Sesha Iyengar Rangarajan was apprehensive that his verdicts about Kuldip Nayar and Bhimsen Sachar would be interfered with by Sanjay Gandhi and his cabal. So he woke up at 3 am every day and himself typed the verdict on his manual typewriter at his residence.

At a family wedding, chief justice TVR Tatachari slipped a sealed envelope to my mother, whispering to her: "If anything happens to Ranga, then open this".

After justice Sesha Iyengar Rangarajan reserved his judgement on 10 September 1975, but before he delivered it, the government released Kuldip Nayar.

The government's counsel argued that since Kuldip Nayar had been released, there was no need for the verdict to be delivered. A livid justice Rangarajan not only insisted on reading out the verdict, but also added several paragraphs severely castigating the government.

A furious Indira Gandhi immediately transferred justice Rangarajan to the Guwahati high court. His fellow judge, justice RN Aggarwal, was demoted to the Delhi district courts. A whispering campaign was set in motion that justice RN Aggarwal was a member of the RSS.

The chief justice of India, AN Ray, immediately acquiesced to Indira Gandhi's verbal wishes, issuing their transfer and demotion orders on the spot.

An angry Indira Gandhi told my father HY Sharada Prasad, who was her information adviser: "You can tell Tatachari that he will never make it to the supreme court".

After several months, Professor PN Dhar, principal secretary to Indira Gandhi, summoned my cousin KR Chandrahas and gave him the release orders releasing my mama KS Radhakrishna from prison, so that he could resume the negotiations on behalf of Jaya Prakash Narayan.

The Janata party government brought justice Sesha Iyengar Rangarajan back to Delhi in 1978, but he could not make it to the Supreme Court. He however became head of the Monopolies and Restrictive Trade Practices Commission.

An interesting anecdote was narrated by Nani Palkhivala to my mother. They knew each other well from the late 1940s when she worked as an aide to the eminent barrister Purushottam Trikamdas.

During one of the hearings in the Supreme Court, Justice Mirza Hameedullah Beg asked the Solicitor General Lal Narayan Sinha if he knew of any other instance where the Executive Branch of Government had arrogated to itself the powers of the Judicial and Legislative Branches.

After thinking for a while, LN Sinha replied: "The Court of Jahangir".

Justice MH Beg retorted that Indira Gandhi did not have the sense of justice and fair play of Jahangir, and asked LN Sinha if she wanted to regress the nation back to the seventeenth century.

The Prime Minister's House and Vidya Charan Shukla exerted great pressure on newspapers to not carry the above exchange, nor indeed any of the arguments of Nani Palkhivala.