Kashmir : Why SC's Omission To Address 'Emergency' Argument Of Petitioners Is Problematic? 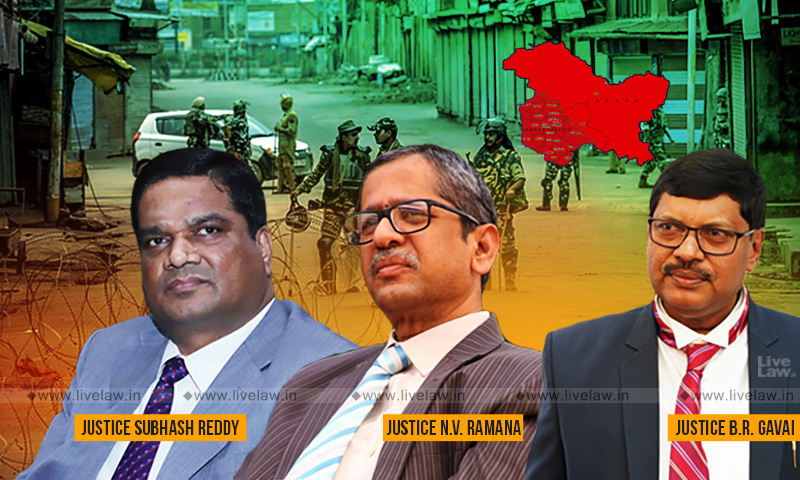 x
The judgment has not dealt with the argument that lockdown of an entire state can be done only by declaring formal Emergency.

The Supreme Court's judgment on Kashmir lockdown elicited mixed responses.Though the Court laid down some important principles and guidelines which could act as a check against arbitrary imposition of internet shut downs and Section 144 CrPC orders in future, it shied away from enforcing these in the given case. Instead of giving a ruling on the legality of the curbs imposed in J&K, the...

Though the Court laid down some important principles and guidelines which could act as a check against arbitrary imposition of internet shut downs and Section 144 CrPC orders in future, it shied away from enforcing these in the given case. Instead of giving a ruling on the legality of the curbs imposed in J&K, the Court asked the Government to review the same in the light of the principles laid down in the judgment.The judgment has not impacted the status quo yet, as the J&K administration has not passed review orders within the stipulated time of seven days.

As lawyer Chintan Chandrachud commented,  "The 130-page judgment yields no decision on the most important issue before the Court — whether various components of the communications lockdown were invalid and should be set aside".

While the approach of the SC in this case has been widely commented upon, there is another aspect of the judgment which needs to be discussed.

The petitioners in the case - journalist Anuradha Bhasin and Congress MP Ghulam Nabi Azad- had raised an argument that widespread restrictions on an entire state over months on the grounds of security concerns can be imposed only by formal proclamation of emergency under Article 352 of the Constitution. It was argued that such widespread curbs cannot be imposed by repeatedly issuing orders under Section 144 of the Code of Criminal Procedure.

One will be surprised to see from the judgment that this argument has not at all been addressed by the Court.

Why an answer on this issue was important?

So there is some degree of Parliamentary scrutiny (in theory at least) over the Executive in the matter of Emergency Proclamation.

At any rate, this procedure ensures more transparency and safeguards than Section 144 CrPC.  The Kashmir lockdown was effectuated through repetitive Section 144 orders imposed by Executive Magistrates. These orders, purportedly based on security concerns, were issued in complete darkness, without publication. The secretive nature of these proceedings gave wide room for arbitrariness and non-application of mind.

The petitioners in the Kashmir case pointed out that the Government's justifications for the lockdown were akin to the security concerns which would warrant the invocation of Article 352.

The State, in its written submissions, justified the blanket and indiscriminate restrictions by pointing to the "unprecedented" and "one of a kind" situation existing in the state of Jammu and Kashmir. The State stressed on the threat of cross-border terrorism, which would resonate with the 'external aggression' ground under Article 352,  to justify the clampdown.

The petitioners submitted that if the threat to the security of India by such external aggression is grave enough to necessitate suspension of fundamental rights guaranteed by Article 19, the State must declare a state of emergency under Article 352.

"By suspending fundamental rights guaranteed by Article 19 without a proclamation of emergency, the Respondents have circumvented the safeguard available through  parliamentary scrutiny under Article 352. Therefore, the Respondents have achieved indirectly what they may not have been able to achieve directly", the petitioners stated in the written submissions.

They also argued that the "State cannot urge the Court to depart from normal standards of proportionality on the basis that this is an "unprecedented" situation on the one hand, while decline to invoke the Constitutional framework of accountability(Art 353) that has been specifically designed for such exceptional and "unprecedented" situations on the other".

Unfortunately, there is no discussion of this issue in the judgment.

This is astonishing, considering that the State had also argued that the situation in J&K was "exceptional", where the normal standards of proportionality cannot apply. The judgment has recorded the submission of the Solicitor General that "'war on terrorism" requires imposition of such restriction. It was the SG's argument that in the backdrop of 'war on terror', the case was not one of a normal law and order situation (See Para 37 of judgment).

At one point, the Court also discusses certain US judgments which had held that degree of protection of free speech is limited during times of war. It appears that the unarticualted premise of the judgment is that J&K is in a 'state of exception'.

Only this premise explains the 'exceptional' nature of relief ordered by the Court, whereby it refrained from adjudicating on the actions of the State. The State was even allowed to get away with its omission to publish and produce all restrictive orders.

That being so, it is baffling that the judgment has not given an answer on the 'emergency' argument raised by the petitioners.

It is indeed a consolation that the judgment has affirmed that principles of proportionality will apply to Section 144 orders and internet shutdowns, and held that repetitive issuance of Section 144 orders would be an abuse of power.

Nevertheless, the result of the SC verdict is that it still gives power to mid-level Executive Officers to impose curbs on fundamental rights on subjective assessment of a 'state of exception' and to create an Emergency-like situation by simultaneous Section 144 orders issued by multiple officers from different parts of the state.

Thus, the requirements of decision making by a higher executive functionary (President) for imposition of Emergency, and a further scrutiny of the situation by the legislative body can still be circumvented, despite the judgment.

Therefore, the 'Emergency' argument was highly relevant, and the SC did a disservice by completely ignoring it.