'If You Want To Lockdown The Entire State, Declare Emergency Under Art 352', Sibal In Kashmir Plea 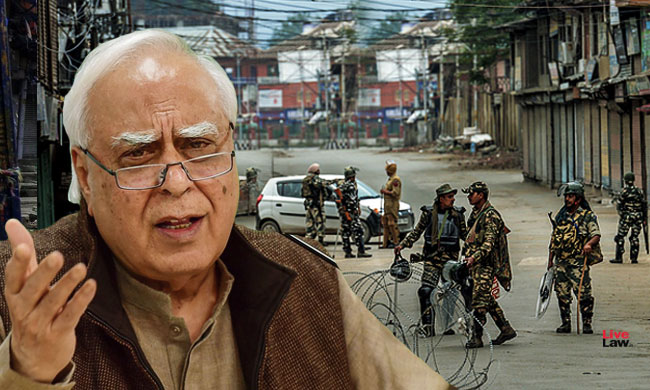 Senior Advocate Kapil Sibal on Thursday submitted before the Supreme Court that lockdown of an entire state can be imposed only by invoking emergency provisions under the Constitution.The route of Section 144 of Code of Criminal Procedure cannot be adopted to shutdown the entire state for more than three months, he argued. Sibal is appearing for Congress Rajya Sabha MP and former CM...

Senior Advocate Kapil Sibal on Thursday submitted before the Supreme Court that lockdown of an entire state can be imposed only by invoking emergency provisions under the Constitution.

The route of Section 144 of Code of Criminal Procedure cannot be adopted to shutdown the entire state for more than three months, he argued.

Sibal is appearing for Congress Rajya Sabha MP and former CM of J&K Ghulam Nabi Azad in the petition filed against the clampdown of Kashmir imposed in the wake of the abrogation of special status of J&K.

Sibal pointed out that all the orders under Section 144 were issued on August 4, before the abrogation of the special status of the State. As per the Constitution which was applicable to J&K before August 5,  'internal disturbances' was a ground to impose emergency under Article 352 of the Constitution.

So if the government feels that it is necessary to impose restrictions, it should declare emergency under Article 352 of the Constitution.

A declaration under Article 352 would be subject to periodic reviews by the Parliament. This means there will be greater scrutiny of the situation.

Without an emergency proclamation in terms of Constitution , the State cannot be allowed to make arguments based on emergency situation : Sibal @KapilSibal #Kashmir

Sibal also pointed out that the Centre has not produced all the orders passed under Section 144 CrPC. Orders relating to only some of the districts were produced by the Centre.

"The centre is not properly assisting the Court", he said.

Sibal said that an entire district cannot be a subject matter of orders under Section 144 CrPC.

"All 7 million people made suspects", he remarked.

Referring to the Supreme Court's decision in "In Re Ramlila incident", Sibal submitted the once a prima facie case of violation of Article 19 is shown, the onus of proving that the restrictions are reasonable shifts to the State.

The burden is on the State to show that the restrictions are absolutely necessary and as minimal as necessary.

The Centre could have adopted less restrictive measures. The lockdown was imposed without taking any measures to ensure that outside people can communicate to Kashmiris and can access essential services.

The shutdown has affected the rights of those outside Kashmir as well. People have been stopped at Srinagar from entering Kashmir. People outside do not receive any information about Kashmir, the senior counsel submitted.

In his petition, Azad sought permission to check on social conditions in the state after the clampdown imposed by the authorities in the aftermath of revocation of provisions of Article 370. He had tried to visit the state after the abrogation of Jammu and Kashmir's special status but was sent back from the airport by authorities.

On September 16, a bench headed by CJI granted him permission to visit J&K on condition that he should not indulge in 'political rally or political activity'.