Lacunae In Law On Who Will Judge The Judges 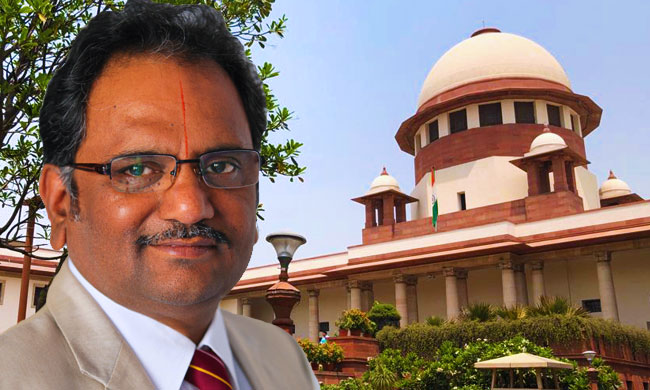 "Kanche chenu mesthe" (is a Telugu proverb that means 'when the fence eats the crop'). When that happens how do we protect the crop from the fence? Among the three estates of the Constitution, the judiciary is the only saviour where wrongdoings of the executive and the legislatures need to be corrected. If the guardians of the Constitution, the judges themselves, are pulled into the...

"Kanche chenu mesthe" (is a Telugu proverb that means 'when the fence eats the crop'). When that happens how do we protect the crop from the fence? Among the three estates of the Constitution, the judiciary is the only saviour where wrongdoings of the executive and the legislatures need to be corrected. If the guardians of the Constitution, the judges themselves, are pulled into the accused's box, who will judge them.

The Constitution of India does not provide any mechanism to inquire into the complaints against the sitting or former judges much less against the Chief Justice of India. So far in India, no Chief Justice of India has been accused of any misconduct. Only when Parliament initiates proceedings for the impeachment of a judge, the inquiry into misconduct is contemplated.

Article 124(4) begins with words "a Judge of Supreme Court shall not be removed from his office…", followed by an exception for impeachment. Only Parliament can resolve to remove a judge. These provisions do not specifically say about the impeachment of the Chief Justice. But the expression 'judge' includes the Chief Justice also, by implication. There has been no occasion for Parliament or Supreme Court so far to think of probing 'misconduct' allegations against the CJI.

Article 124(5) says Parliament may by law regulate the procedure for the presentation of an address and for the investigation and proof of the misbehavior or incapacity of a judge, based on which he can be impeached. Exercising this power, Parliament passed the Judges (Inquiry) Act, 1968, which is a procedural statute that regulates "the procedure for the investigation and proof of the misbehaviour or incapacity of a judge of the Supreme Court or of a High Court and for the presentation of an address by Parliament to the President and for matter, connected therewith". Section 3 lays down that the investigation into the charges would be made by a committee of three members who would be selected by the Chairperson of Rajya Sabha or Speaker of Lok Sabha.

One Bill, the Judges (Inquiry) Bill, 2006, that seeks to replace the Judges (Inquiry) Act 1968, and another, the Judicial Standards and Accountability Bill, 2010 have not been passed. The 2006 Bill sought to establish a National Judicial Council to inquire into allegations of incapacity or misbehaviour of judges of the High Courts and Supreme Court. It has defined 'misbehaviour' as "wilful or persistent conduct which brings dishonour or disrepute to the judiciary; or wilful or persistent failure to perform the duties of a judge; or wilful abuse of judicial office, corruption, lack of integrity; or committing an offence involving moral turpitude…"

The Judicial Standards and Accountability Bill, 2010, suggested a definition of 'misbehaviour' as "corruption or lack of integrity which includes delivering judgments for collateral or extraneous reasons, making demands for consideration in cash or kind", or "any other action… which has the effect of subverting the administration of justice". Failure to declare assets and liabilities, or wilfully giving false information was also included within the definition of 'misbehaviour'. Sexual harassment allegation, if proved, will certainly be 'misbehaviour'. As these Bills have not become Acts, and the 1968 Act did not define them, things are left to the interpretation of the courts. Until the motion for impeachment is admitted in Parliament, it is legally impossible to constitute an inquiry panel.

The notice for motion of removal should be given by not less than 100 MPs of Lok Sabha or 50 MPs of Rajya Sabha in both Houses on the same day. Only after admission of this motion, the Speaker or the Chairperson has to constitute the committee.

This committee will frame definite charges against the judge on the basis of which the investigation is proposed to be held. Such charges have to be communicated to the accused judge. Based on a written submission by the judge, the Committee may alter the charge. The accused judge shall be given a reasonable opportunity to defend his case and cross-examine the witnesses. The government can appoint an advocate to represent that judge. If the committee submits the report to the Speaker holding that the charge of misconduct is proved, then a motion of impeachment can be taken up for consideration. Only with the support of two-thirds of members sitting and voting, a judge or chief judge can be removed.

The removal of judges is made difficult to secure the independence of the individual judge and the judiciary as a whole. Under the US Constitution a judge would continue till death unless impeached. There is no retirement for judges in US. It is sarcastically said the Indian Constitution gave a great relief by stipulating that the judges will retire at the attainment of the 65th year. The present Chief Justice of India Justice Ranjan Gogoi is due to retire on November 17, 2019.

Undoubtedly sexual harassment amounts to misconduct, but no committee can investigate the charges against a judge under the Judges Inquiries Act 1968 unless both Houses admit the notice for the motion. Because there is neither a motion passed in Parliament nor is there a competent committee, the court-staffer's complaint against the Chief Justice of India Ranjan Gogoi cannot be investigated by any committee.

Can the Internal Complaints Committee constituted under the Sexual Harassment (Prevention Prohibition Redressal) Act 2013 probe this allegation against CJI? The definition of 'employer' under this Act includes the head of a department and 'respondent' means broadly any person against whom the allegation is made. Technically the CJI could be a respondent employer. Then the SC regulations which created Gender Sensitisation and Internal Complaints Committee (GSICC) have to deal with this case. The CJI appoints the Chairman of the Committee, nominates the members and also has the power to remove them. But lawyers have questioned if it is proper for this Committee, which is subordinate to the CJI, to inquire into allegations against the CJI?

It is also doubtful whether the GSICC of the Supreme Court could inquire into the charges against Justice Ranjan Gogoi even after he demits the office of Chief Justice of India. In 2014, retired judge of Supreme Court AK Ganguly faced a similar allegation of sexual harassment by a law intern during an arbitration proceeding. He has stepped down from the chairmanship of the West Bengal Human Rights Commission when the Union Cabinet decided to make a Presidential reference to the Supreme Court under Article 143 for his removal. Then also no committee was appointed to inquire into the allegation.