Law On Reels - The Bat v. The Clown : Some Philosophical Questions 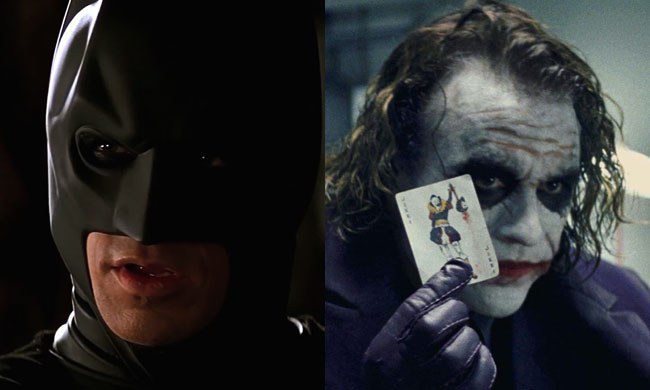 x
"It's not who we are underneath, but what we do that defines us"

It is the time of Navaratri, a celebration which depicts the victory of good over evil. Considering this post as a deviance from the usual stuff, allow me to take the privilege to try out some fun with fiction, philosophy and law. Batman and Joker are two symbols depicting good and evil. The apparent duality is seen in every phase of life, let it be politics, cinema or even the...

It is the time of Navaratri, a celebration which depicts the victory of good over evil. Considering this post as a deviance from the usual stuff, allow me to take the privilege to try out some fun with fiction, philosophy and law. Batman and Joker are two symbols depicting good and evil. The apparent duality is seen in every phase of life, let it be politics, cinema or even the legal system. It is this duality which keeps either sides striving for existentialism.

A lot of movies have been created on the character 'batman' since its inception. However, 3 movies which stand amongst all batman movies is the Batman Trilogy by Christopher Nolan. To list out few reasons for the splendid craftsmanship being a favorite for every Batman fan is the in depth portrayal of the individual, society and legal system. The series of movies can be a subject of study for any discipline which includes psychology, sociology, philosophy and law. Since a series of posts would be required for a detailed analysis of the movies, this post would serve as an introduction looking into to the jurisprudential aspects of the characters of Batman and his worst enemy, the Joker with reference to the movies created by Nolan. This post more or less examines the aspect of morality attached to both characters by applying existing theories of jurists.

Batman – A Utilitarian, Kantian or Positivist?

Batman as a comic character has infiltrated the hearts of millions of people over the years. One of the major reasons which makes the character irreplaceable and inimitable in the minds of people when compared to other characters is that, he is a human being devoid of any super natural powers. Even though the acts of Batman cannot be depicted or imitated in a real and practical scenario, it arouses the vigilante hidden in every individual.

Analyzing the actions of Batman, one can debate over the question – What school of thought does the Batman philosophy fit into? Whether it is utilitarianism founded by Jeremy Bentham which judges the morality of an action based on the consequences which leads to the happiness of maximum number of people or is he a follower of the philosophy of Immanuel Kant which confers an absolute moral duty devoid of any exceptions or is he a positivist? Most of the actions of Batman portray him as a follower of Utilitarianism since his actions are meant to serve happiness to a greater number of people in the society. He voluntarily puts himself into life threatening situations for the larger interest of the society. In the second installation of the Dark Knight Trilogy, the Joker puts Batman in a situation where he has to choose between the lives of his love Rachel and Harvey Dent, where he chooses to save Rachel and Commissioner Gordon goes after Harvey Dent. However, the Batman ends up saving Harvey Dent since the Joker had misled him to the wrong address. Here Batman's decision to save Rachel must have been driven by his emotional and selfish interest to choose his love over Harvey Dent. If he was a follower of the Utilitarian theory he would have chosen to save Harvey Dent, the District attorney of Gotham city, who served as a symbol of righteousness and hope in the eyes of the people of Gotham since he very well knew that he stood a better chance than Gordon to save Harvey Dent. By doing this, was Batman morally correct in choosing to save Rachel in the first place?

Another question which undermines the argument that Batman is a utilitarian is that, why doesn't the Batman kill the Joker? Well, in general Batman finds it unethical to take lives of people, but is he morally justified in not killing the Joker who is a threat to the society. By sticking to the rule that he won't take lives of people whatever may be the circumstance, Batman appears to be going by the Kantian philosophy of morality since killing of a human being is a universally condemned action. However, in order to conceal his identity, he resorts to lying. So, according to Kantian Ideology Batman's action is not moral since lying universally cannot be justified as a moral action. Moreover, viewing the actions of Batman in the long run, it encourages more and more vigilantes to break the law which is also not desirable going by the Kantian philosophy.

Now is Batman a positivist?, well definitely "No" because he does not truly believe in the rule of law, which is why he takes the law in his hands and feels strongly justified in doing so. He is seen by most people as a frequent law breaker and cannot categorically fit into the shoes of a positivist.

Weighing all the three theories, certain actions of Batman can be justified through the utilitarian theory and also the Kantian philosophy, but the positivist theory in no way justifies his actions. However, the question still remains – Whether Batman is a utilitarian or Kantian?"

The Joker- A Misfit for all theories?

A psychotic criminal who wants to see the world burning. His acts are devoid of any reasoning or logic. He calls himself "an agent of chaos". He does not seek money or power. He is against the established order of the society and believes that the society is shielded with a false morality which would break in the event of a chaos and would force human beings to expose their inherent nature. Never before has a clown seemed to be so frightening to people. We find the Joker experimenting throughout the movie creating situations which provide an ultimate test of morality to the people of Gotham.

In the Dark Knight, a situation is depicted where the Joker plants a bomb in two boats, one of the boats carrying criminals and the other carrying innocent people. He provides both of them with a trigger to the bomb and gives them a deadline before which either of them should trigger the bomb failing which he would blow up the two boats. This same situation can be compared to the often discussed popular experiment in ethics known as the "Trolley Problem" which refers to a situation where, a trolley moving towards a track where 4 people are working and a person witnessing nearby has an option to change the course of the trolley by pulling the lever, however the trolley would eventually hit 1 person on the other track. The central question asked here is, whether it would be morally correct to risk one's life to save 4 other lives. In the present situation, it becomes harder since both boats were carrying considerable number of people where the only distinguishing factor is the character of the human beings. Do the innocent people in one boat have a right to save their own lives by triggering the bomb planted in the other boat just because it carried criminals in it, or do the criminals in turn have a right to do the same?

Another situation in the movie can be compared to the well-known example of a scenario in the game theory analysis known as the "Prisoner's Dilemma", where two rational prisoners involved in a similar crime, while being questioned separately, fail to cooperate by remaining silent when they are lured towards the reward of reducing their sentence in the event of testifying against the other. Here, the Joker's calculation completely goes wrong since he fails to trigger the basic instinct exploited in the "Prisoner's Dilemma" scenario, since the human beings in both boats decide not to trigger the bomb planted in the other's boat.

The Joker is as strange as his statement- "Whatever doesn't kill you, simply makes you stranger". Joker's character does not fit into any of the western jurisprudential theories. Let it be the utilitarian theory which maximizes pleasure and minimizes pain, here we find the Joker maximizing pain among people by disturbing the security and tranquility to which the society is familiarized. He also violates all moral borders of the Kantian ideology by committing theft, murder and treason. His belief in lawlessness and his defiance to the State destabilizes the cardinal principle of positivism. Even though he considers himself to be ahead of the "curve", it is quite difficult to understand what the Joker is after. One might need to dig into philosophies of other parts of the world or we need to create a separate jurisprudence for the Joker, the Joker's Jurisprudence.

This post finds its relevance at a time when the newly released movie "Joker" has been faring well in various film festivals and has hit the Indian theatres on Oct 2, the birthday of a person who holds a larger than life picture in the hearts of each one of us, one cannot ask for a better day. It in a way, reminds us the way the society and system has lived up to the expectations of that noble soul and has unjustifiably mocked at his principles. Joker is a depiction of every person to whom the system has failed to deliver what is due. More than that, Joker is a universe of chaos where all institutional mechanisms are tied up preventing them from rendering justice, only what exists is a mirage of pools of justice in a 73-year old desert. Let us find out what this new incarnation of Joker has to offer.

(The author is a a research scholar at Inter University Centre for IPR Studies, CUSAT, Kochi)

(This is eight in the "Law On Reels" series, which explores legal themes in movies)