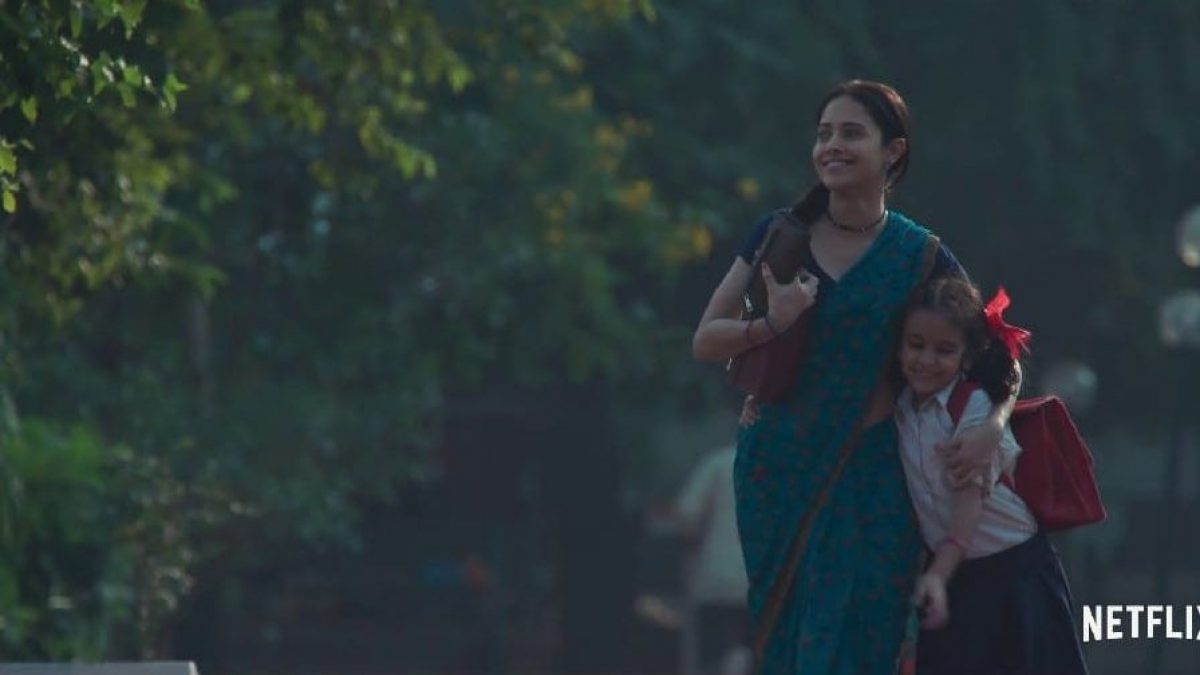 The recently released Hindi anthology film, Ajeeb Daastaans presents four complex stories of caste, patriarchy, sexuality and marginalization. One of the stories 'Khilauna' is story of Meenal (played by Nushrat Bharucha), a domestic worker in an upscale colony. In this layered story, Meenal faces sexual harassment at the hands of Vinod Agarwal (played by Maneesh Verma) in whose house...

Subscription starts from
₹ 599+GST
(For 6 Months)
View Plans
Premium account gives you:
Subscribe Now
Already a subscriber?
Login
The recently released Hindi anthology film, Ajeeb Daastaans presents four complex stories of caste, patriarchy, sexuality and marginalization. One of the stories 'Khilauna' is story of Meenal (played by Nushrat Bharucha), a domestic worker in an upscale colony. In this layered story, Meenal faces sexual harassment at the hands of Vinod Agarwal (played by Maneesh Verma) in whose house she was working as a domestic worker. Vinod voyeuristically stares at her, inappropriately touches her and on her refusal threatens her that electricity in her house will not be restored.

While the story is not about law or legal systems, it does attempt to bring focus on sexual harassment domestic workers face at their workplace. Domestic workers have rarely received attention as 'worker' within legal framework.[1] The law has conveniently ignored right to safe work place for domestic workers who face marginalization and discrimination on multiple accounts.[2]

The Sexual Harassment of Women at Workplace (Prevention, Prohibition and Redressal) Act, 2013 is the primary law dealing with issue of sexual harassment of women at workplace along with various IPC provisions. The POSH Act has to two kinds of mechanisms for prevention and rederessal of sexual harassment at workplace- first, the Internal Committees and second, Local Committee. While the Internal Committee is a structure for organized sector, the Local Committee has jurisdiction over largely over unorganized sector. (Notably unorganized sector has been defined under section 3(p) to mean enterprises which employ less than 10 employees.)

Despite the mechanism of Local Committees, domestic workers due to their caste and class have rarely found place in discourse on making workplace safe for women. The unorganized sector is the main employer of women in the Indian economy with estimates for women's participation in unorganized sectors ranging from 80% to 94%.[3] Thus Local Committees is the applicable mechanism against sexual harassment for majority of the Indian women at work place and yet legal discourse has not focused on them.

In fact, the origin of POSH act lies in case of a Bahunjan Sathin woman Bhanwari Devi, who was raped by upper-caste men while she was trying to stop a child marriage as part of her work as a Sathin (a grassroot worker working for rights and welfare of women) in Rajasthan. On the basis of Bhanwari's case the Supreme Court of India issued the famed Vishakha v. State of Rajasthan guidelines, which ultimately led to the 2013 act.[4] Bhanwari herself never got justice.

The 2013 act recognizes right of domestic workers for protection from sexual harassment at their workplace. Section 3(a)(ii) defines 'aggrieved women' to include 'a woman of any age who is employed in a dwelling place or house'.

Section 3(e) defines 'domestic worker' as a woman who is employed to do the household work in any household for remuneration whether in cash or kind, either directly or through any agency on a temporary, permanent, part time or full time basis, but does not include any member of the family of the employer. Clearly, the definition is expansive and includes any woman domestic worker whether receiving remuneration in cash or kind (say a domestic worker who stays at house of her employers for performing her services). A domestic worker who for example visits house once a week is also covered irrespective of the temporary or non-regular nature of her employment.

Section 3(iv) defines employer in relation to a dwelling place or house to mean a person or a household who employs or benefits from the employment of domestic worker, irrespective of the number, time period or type of such worker employed, or the nature of the employment or activities performed by the domestic worker. Further section 3(vi) defines workplace to include a dwelling place or a house.

Thus a domestic worker is recognized as a worker and aggrieved women if she faces sexual harassment at her work place i.e. home of other people where she works.

At least one woman should be from Scheduled Caste, Scheduled Tribe or Other Backward Classes community.

The District Officer also has duty to monitor the timely submission of report furnished by the Local Committee and to take measures for creation of awareness on sexual harassment and the rights of the women. (section 20)

The procedure for filing the complaint, inquiry and outcome by Local Committee are largely similar to Internal Committees. A complaint has to be filed within three months of the incident. Much like Internal Committee, Local Committee has power of a civil court. [section 11(3)] In case of domestic workers, if the Local Committee find prima facie existence of the case, it shall forward the complaint to the police, within a period of seven days for registering the case under section 509 of the Indian Penal Code (45 of 1860), and any other relevant provisions of the said Code where applicable. [section 11(1)]. The LC is required to provide the inquiry report to the District Officer within a period of ten days from the date of completion of the inquiry, who has to act within 60 days of its receipt by him. Provision for compensation and determination of compensation has also been provided in the act. Rest of the rules have to be prescribed by appropriate government.

We need to recognize the domestic workers as working woman with houses as workplace. Domestic workers have legally established right against sexual harassment at workplace like every other working women. If LCs were to be paid attention, the POSH would reach to majority of women rather than being confined to small number of organized sector establishments.

(This is the twenty-fourth article in the "Law On Reels" series, which explores legal themes in movies)