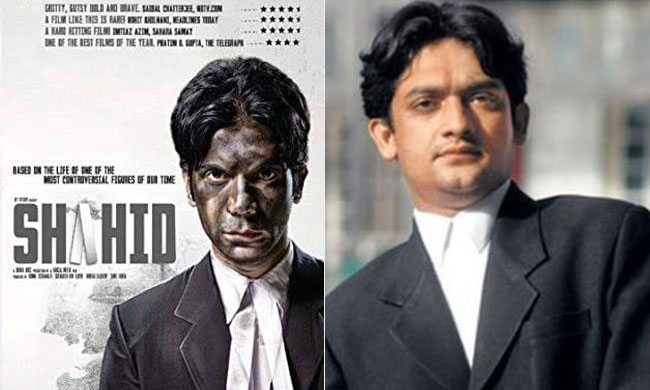 x
His experiences do not make him bitter; rather, they build in him empathy for similarly placed victims

Lawyers are supposed to be emotionally detached from their cases. "Don't identify with your clients"- this is the mantra for ensuring professional efficiency, and more importantly, one's own mental peace.But not all can function with such neatly divided compartments of professional commitments and personal values. Shahid Azmi, the Mumbai-based lawyer who was shot dead in 2010...

Lawyers are supposed to be emotionally detached from their cases.

"Don't identify with your clients"- this is the mantra for ensuring professional efficiency, and more importantly, one's own mental peace.

But not all can function with such neatly divided compartments of professional commitments and personal values.

Shahid Azmi, the Mumbai-based lawyer who was shot dead in 2010 for handling cases of terror accused Muslims, belonged to the latter category. This is the impression conveyed by the national award winning biopic "Shahid", released in 2013. 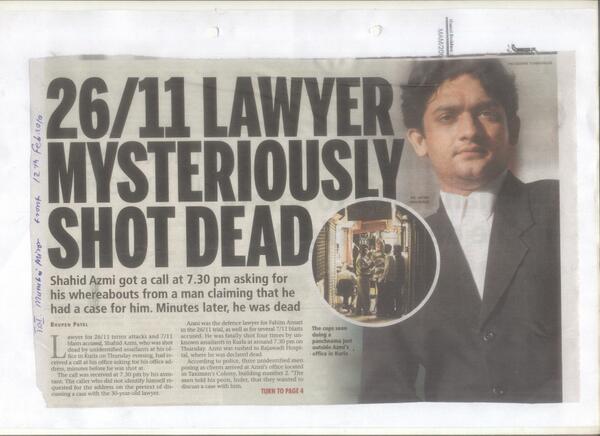 At one scene in the movie, Shahid( Raj Kumar Rao) is seen disobeying the instructions of his senior, a leading criminal lawyer, to handle the case of a client. Because, Shahid is convinced that it was an "open and shut case of crime", which should not be defended. His senior dubs him naive, and asks him to learn the ways of the profession to make a living out of it.

Later we see Shahid starting his own practice, handling cases of those from a very particular spectrum- innocent persons detained under draconian anti-terror laws, who he believes to have been targeted solely on the basis of their religious identity. He is emotionally invested in these cases. In the courtroom scenes, we don't see him sober, clinical or even graceful. Rather, he is impassioned, restless, intense and driven by inner rage against the unjustness of the system. So much so that a judge once tells him that he should "learn to let go sometimes". Even after the hearing is adjourned, we see him continuing the argument with the prosecutor who had opposed his bail plea. He is impatient and uneasy until he sees injustice rectified. Because, he thought of himself as fighting a cause than the cases of few individuals.

There is a reason why Shahid's approach was shaped thus.  He himself was a victim of systemic oppression. The beginning of the movie offers a peek into the early years of his adulthood. Deeply disturbed after witnessing the horrors of 1992 Bombay riots, he was led astray to join a jihadi training camp. Later, good sense dawns on him and he escapes the camp. But the folly of adolescence comes back to haunt him much later, when he gets implicated under TADA for a case in which he had no involvement at all.

In jail, meets the radical Omar Sheikh, who was later released by India after hijack of Indian Airlines flight in 1999. Sheikh tries to inject the idea in Shahid that  Muslims will not get justice in India. Shahid also meets Ghulam Navi Waar, a 'reformed radical', who offers him sanguine advise that "to change the system, you need to part of the system". Presented with two totally different paths, he opts to discard the radical advice, defying the determinist theory that a person's actions are predetermined by  circumstances. One always retains the power to shape destiny. Free will triumphs regardless of the circumstances!

Later, Shahid gets acquitted by Supreme Court of all terrorism charges, after nearly eight years of detention without trial. "Indian judiciary is slow; but it works", he sighs.

His experiences do not make him bitter; rather, they build in him empathy for similarly placed victims. With the resolution to fight injustice he chooses to study law. His pursuit of justice is guided by the following motto of Roy Black :

"By showing me injustice, he taught me to love justice. By teaching me what pain and humiliation were all about, he awakened my heart to mercy.Through these hardships I learned the hard lessons. Fight against prejudice, battle the oppressors, support the underdog. Question authority, shake up the system, never be discouraged by hard times and hard people. Embrace those who are placed last., to whom even the bottom looks like up. It took me some time to find my mission in life - that of a criminal defense lawyer. But that 'school', and that Teacher, put me on my true path. I will never be discouraged. Even thorns and thristles can teach you something, and lead to success"

By the time he starts practice, TADA gets repealed, but only to be replaced by an equally draconian POTA. The victims remain the same. "My client would not have been detained if his name was Michael, John or More", he argues in court in the case of Zaheer Sheikh, who was arrested on the sole ground of lending a laptop to a childhood friend, who turned out to be the terrorist bomber in Ghatkopar case. 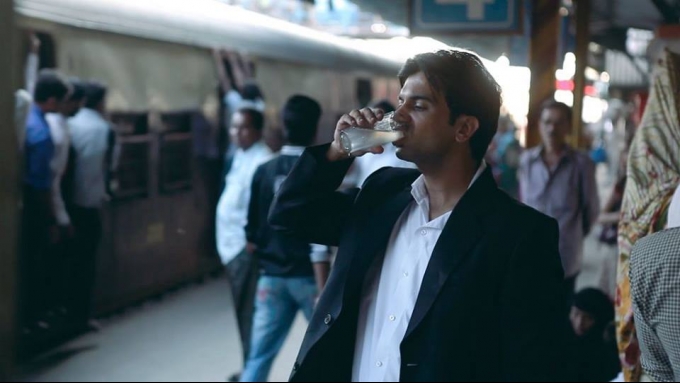 He punctures the concoctions of prosecution with commonsense. When a planted witness tells the court that he saw the accused in the company of terrorists in Nepal, Shahid asks "Tell me, what is the currency of Nepal?". The witness gets easily discredited.  When prosecution says that the accused had handed over a map to the terrorist in 26/11 attacks, Shahid points out that the map claimed to have been recovered from the trousers of the slain terrorist had no blood stains and was neatly creased. 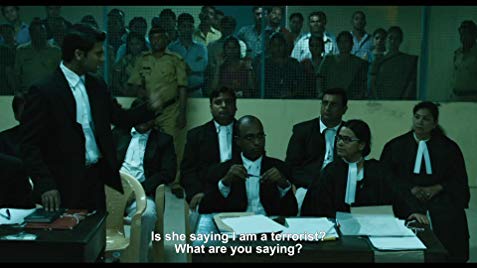 When pushed to the wall, the prosecutor retorts nastily, taunting Shahid with his past. This unsettles him, making him ask in Court "Am I the one on trial?".

Rajkumar Rao's diminutive frame and boyish charms lend a fitting ordinariness to Shahid, who went about his life without any notions of heroic self-image. Director Hansal Mehta follows a restrained approach, with economy of shots, condensing Shahid's life in less than 120 minutes. The film is set in a sombre tone, which befits Shahid's latent angst. The grim political subtext of the film is conveyed powerfully, with nuance and restraint. The court room scenes are well choreographed, though the romantic track and extended family scenes seemed contrived.

In his brief seven years of practice, Shahid secured 17 acquittals, which included those accused in the sensational Ghatkopar blast case, July 2006 local train blasts case, and 26/11 terror attack. Enemies poked fun at him with the moniker "jihadiyon ka gandhi". The media termed him "reformed radical", though he was never a radical at any point of his life, and was acquitted of all terrorism charges.

On February 11, 2010 he was shot dead in his office. He was handling the case of Faheem Khan, an accused in 26/11 attack case then. Faheem Khan was later acquitted by Court, after Shahid's demise.

The trial in his murder case is set to commence tomorrow, February 25.

(This is the third piece in Law On Reels, a fortnightly column discussing legal themes in movies. The first was on movie 'Lincoln', and second was on "Court")