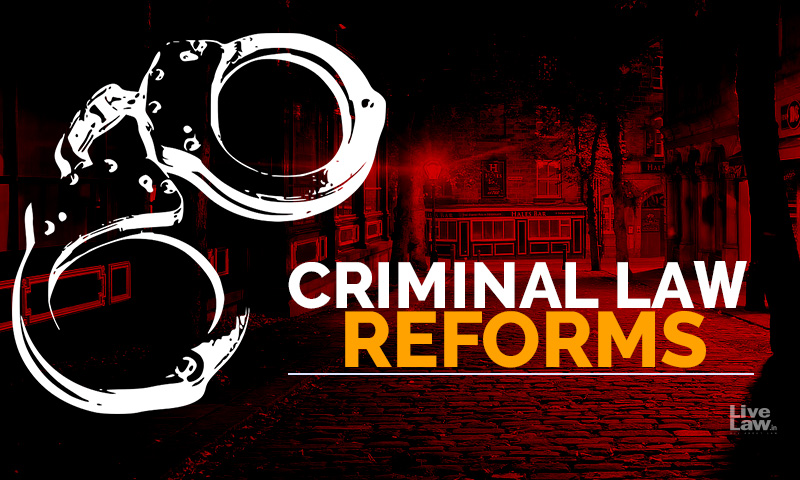 Law reforms are a means to enforce rule of law in a manner contemporaneous with the changing times. It is a tool that is utilized to prevent laws from stagnating and losing relevancy in time. Reforms are the basis of initiating a substantial change in the laws. The democratically elected governments are placed in charge of undertaking the same. However, reforms are and must be dehors...

Law reforms are a means to enforce rule of law in a manner contemporaneous with the changing times. It is a tool that is utilized to prevent laws from stagnating and losing relevancy in time. Reforms are the basis of initiating a substantial change in the laws. The democratically elected governments are placed in charge of undertaking the same. However, reforms are and must be dehors of politics. As much as legislative action is inherently a political the process, law reforms must be maintained to remain non-political. Furthermore, being non-political ipso facto does not guarantee democratic transparency and public participation in the process of reforms. Independency and Public Participation/consultation constitute the core of any reform in a democracy. Democratic governments provide for public engagement in lawmaking through consultations.[1] Greater degree of transparency and public participation not only upholds democratic values but also reduces the possibility of such reforms getting caught midst storm of controversies. Criticism of any policy or reform is inevitable however, criticism that is born out of lack of confidence, transparency or any reason that allows any mala fide intention to be attributed to the very process of reform, manner in which it is undertaken and not just its outcome strikes at the very root of it. In absolute legal terms such reforms and reformatory processes are void ab initio.

A positive perspective on participatory procedure is offered to show that trust in judicial and policy decisions increases when procedures are perceived as fair.[2] India has seen various reforms being undertaken after Independence since 1947. The Fundamental Rights and Directive Principles reshaped and redefined law reforms to accommodate and meet the needs of a plural society. The Law Commission of India has forwarded various reports on diverse subject matters that are considered by the Ministry of Law in consultation with the concerned administrative Ministries and are submitted to Parliament from time to time. They are acted upon by the concerned department based on the recommendations of the Government. Most importantly, all its efforts in this regard have been to ensure that widest section of people are consulted and involved in the process of reforms.[3] This participation is ensured through various means like partnership with professional bodies, academic institutions, organizing seminars and workshops to elicit critical opinions on proposed reformatory strategies. Its success has always been measured if not entirely but significantly based on the public involvement and inputs that it manages to gather from concerned interest groups. The Law Commission on its website provides the protocol it follows while undertaking its work towards suggesting reforms.

"The fact that law reform bodies are independent of government is what sets the consultation process apart from community consultations conducted by governments. It provides a level of confidence, which is essential to achieving wide community input. While the nature and extent of community engagement depends upon the subject matter of the reference, it is no longer considered enough for a law reform body to publish a discussion or issues paper, schedule a public hearing or two and wait for the submissions to flow in. Greater creativity is expected."

One may question what is the need for public participation in law reforms. The answer to put simply is because, its them who are on the receiving end of such reforms. Laws function for and with the society and not in vacuum. Hence, what is "for the people" must also be "from/by the people." That also happens to be one of the basic tenet of a democratic society. Another very realistic explanation is intellectual expectations and theories of reform proponents need to be understood in its practical aspects. Purely academic approach fails to recognise social, cultural and structural variables which influence operations of the laws. The very idea of making laws contemporarily relevant is lost when contemporary considerations are denied due regard. Law reforms for the marginalised can't be undertaken without understanding their concerns and to understand, they must be included in the process of reforms in substance and not just in form. In other words, only those who suffer know the pain, others can only imagine! Indeed in a country with a diverse population, every individual can't be consulted nor is it expected but a representation of the society can indeed be achieved through its stakeholders. Stakeholder's who represent diverse areas bring to the front the voices that otherwise are stifled in an echo chamber.

Public Participation in law reforms is not only an exclusively Indian notion/expectation. The Australian Law Reform Commission began to lead the way into a new era where community consultation was quickly identified as an essential ingredient of successful modern law reform.[5] We may have look at, the LGBTQI reference made by the Attorney-General of South Australia in 2015 to the South Australian Law Reform Institute to bring about gender and sexual equality in its laws. The process began with physical interactions with the LGBTQI community and key service providers to help isolate the priority areas of reform. It was through these interactions that the key areas where they faced discrimination were identified based on which series of fact sheets were prepared outlining the current law in identified key areas. These were again circulated to the public through Government's websites to gather responses based on which the first report, called Audit Report was prepared. This report then underwent a review by specialist Advisory Group established for this specific purpose. This Audit Report was followed by 4 further reports.[6] It is this attribute which is seen as a distinguishing feature of law reforms from other similar endeavours.

It is given that the inputs received by the Reform Committees are in no sense binding on them. But, will they gain the confidence of the public towards the reforms sought to be made, by merely doing a lip service to the deliberative process? Is the ultimate objective restricted only towards enforcing the reforms by thrusting them on people? Governance is smoother when those sought to be governed are made a part of it. We don't have to travel farther in time to justify this point. The Farm Bills of 2020 (now Acts) for instance, the discontent and agitation against it arose primarily from the failure of the government to instil a sense of confidence among the farmers that it is not deterrent to their interests. Better results would have been achieved had they sought to create this confidence through deliberative parliamentary devices available at their disposal. Laws as iterated earlier do not operate in vacuum and if those for whom they are being made are not reflected in its making, its difficult to expect that they will be adopted without resistance. A woman is more equipped in taking decisions about her body than a man and that is not debatable.

The Criminal Law Reform Commission notified by the Indian Ministry of Home Affairs in May 2020 which is constituted to undertake reforms of three legislations governing this domain i.e. the Indian Penal Code, the Code of Criminal Procedure and the Indian Evidence Act. At no point do I wish to argue that, these laws do not need reforms or even question the academic deliberations and efforts the 5-member committee would be putting in. However, the manner of its functioning behind the veil, lack of engaging the required stakeholders, lack of diversity of panel members, undertaking a mammoth task of utmost importance midst a pandemic is inevitably forcing people to speculate whether these reforms are a by-product of political haste rather than socio-legal needs. Its claims of independence from any ministerial interference or influence also seem to fail to convince the majority. Large segment of the legal fraternity has raised it concerns through various representations demanding answers to some pertinent questions. Those answers have failed to satisfy the onus of expectations and responsibilities attached to such committees. Academicians, practising lawyers, retired judges, law students who are all stakeholders in this process have expressed their concerns over the committee's

This seems to raise a very fundamental concern of whether law reforms are being seen as a dice in the political board game. While answering the same caution must be taken for the outcome is likely to define the future of every individual who at some point may find himself/herself being drawn into the criminal law sphere. Today in India, where special laws like the UAPA, PMLA and NDPS seem to have expanded the sphere of attribution of criminality to individuals and in doing so traversing dangerously close to transgressing into the domain of basic freedoms like privacy. Politics and criminal laws seem to have reached a point of intersection. This intersection has to be guarded against for the resulting outcome will have grave consequences. If India could wait for so long for criminal law reforms argued to be long overdue, it can surely wait a few more months or years for the same to be undertaken in a manner due.

A committee who is surrounded by lack of confidence and its political independence as claimed is not perceived by people, simply gives more concreteness to the alleged political stake in its outcome. Success of law reforms are defined by the process undertaken to bring it about then the outcome alone. When the credibility of the process itself is under question it would be difficult to accept the outcome. A deliberative process of reform must not be allowed to succumb to political haste for the underlying politics has a shelf-life of only 5 years but the reforms have an impact that will survive beyond those.

Concluding in the words of Ian Devis, a law reform body "fails in its work if it cannot fairly demonstrate that, it actively sought submissions, even if they ultimately fail to materialise in the scope, number or depth that might have been hoped for."[9]

[1] Public Engagement with the Legislative Process Background Note for the Conference on Effective Legislatures, https://www.prsindia.org/sites/default/files/parliament_or_policy_pdfs/1370586595_Public%20Engagement%20with%20the%20Legislative%20Process.pdf

[7] Arpan Chaturvedi, What Is at Stake In India's Criminal Law Reforms Consultation, https://www.bloombergquint.com/law-and-policy/what-is-at-stake-in-india-criminal-law-reforms-consultation