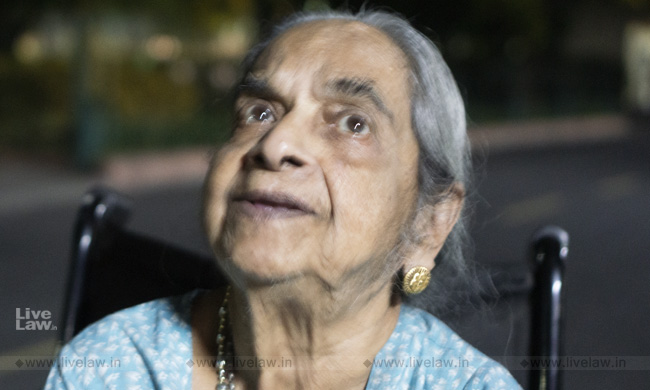 The passing of Lily Thomas brings to the close a wonderful legal career of a most interesting advocate. The last time we met was earlier this year when she wanted to intervene in the Babri case to bring peace to the issue. I did not know that when we spoke in the corridor it would be the last time I would see her in this life time. Born in Kottayam in l927, she lived in Trivandrum, and after graduating in law joined the Madras Bar in l955 and finished her LLM in Madras University and gave up a possible academic career to join the Supreme Court in l960, to become one of the few women who practised law in the country and even less so in the Supreme Court. No sooner had she joined the Bar she appeared in person in l963 in a case called In Re. Lily Thomas (l964) 6 SCR 229. I guess she was one of first Public Interest Lawyers, even if not recognized as such, and clearly as one of the forerunners of what has now become a movement which has changed the course and career of the Supreme Court in the l980s and beyond. She had a simple point. If lawyers had a right to practise, this included the right to plead and act for the client which the Advocate on Record (AOR) system did not permit her to do. Indeed, the AOR system was a copy cat from the Privy Council for a legal agent to manage the case in faraway England. In effect, in this case, she challenged the Supreme Court and its rules preventing direct access for all lawyers to file cases in the Supreme Court. It was heard by a powerful 5 judge bench and opposed by the Additional Solicitor SV Gupte. She lost the case but this did not dampen her spirit. In l986, Lily Thomas v. State AIR 1986 290 she challenged the power and system of the legislature giving pensions to legislators who had not completed a year more in the legislature. Her case moved from the Single Judge to a two-judge bench presided over by Chief Justice Chandurkar. She was opposed by the Advocate General of the State. She may well have been right in questioning legislators offering special perks to themselves. She was speaking from her heart. We see Lily back in form in Lily Thomas v. Speaker Lok Sabha (l993) 4 SCC 234 complaining that abstentions from voting could not affect the impeachment of a judge. To her, this had cheated the integrity of the process especially as the abstainers were present in the house and party to the process. This was a gut feeling once again of cheating the law through technicalities in the face of the larger responsibility to indict the judge. In Lily Thomas v. Union of India (2000) 6 SCC 224 of Hindu women converting to marrying a Muslim during the subsistence of their Hindu marriage. Conversion could not dissolve a marriage. A practicing Syrian Christian, Lily had no animosity to other faiths and read the Vishnu Sahasraman and the Bible.

Perhaps her greatest triumph was Lily Thomas v. Union of India (2013) 7 SCC 653 to upset a major technique through which convicted criminals were not disqualified until their case was finally disposed of in appeal. This malpractice had been going on for years and years. Unless the Court stayed the conviction, a convict, was a convict, was a convict. By this, a large number of legislators would remain disqualified. This was overdue and crucial to de-criminalization of Legislators who were rightly convicted.

Younger members of the Bar may not have known her except as a memory of the cases reported in law reports. But many of us do. Once I told her: "Don't be silly, Lily" – not quite realizing that I was teasing her which I was not. She had been through this before. She smiled and replied: "I am Lily, not silly. You're silly." All the best Lily – the first public interest petitioner.