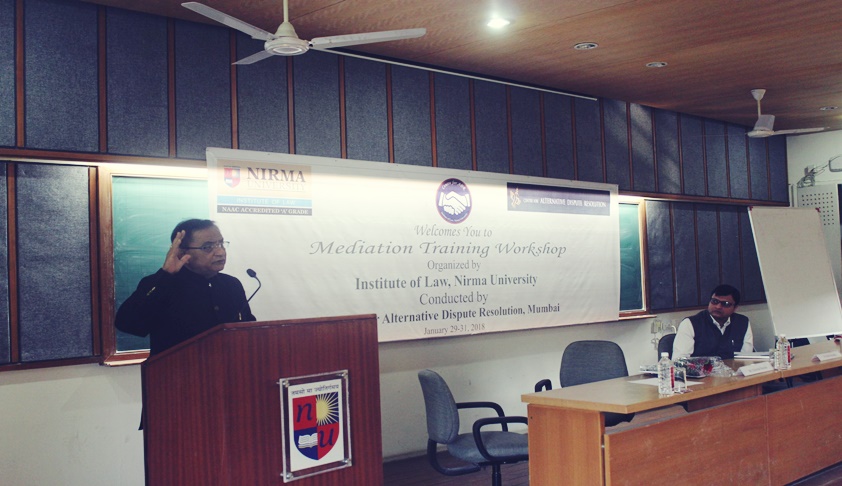 Gone are the days when you spoke of "mediation" and people would mistake it to be "meditation". Even my computer has stopped doing an auto correct. But have we gone far enough in understanding mediation? Mediation is still regarded as a poorer cousin of the conventional adversarial processes like litigation and arbitration. It is understood as an ad hoc process of settlement of disputes at...

Gone are the days when you spoke of "mediation" and people would mistake it to be "meditation". Even my computer has stopped doing an auto correct. But have we gone far enough in understanding mediation? Mediation is still regarded as a poorer cousin of the conventional adversarial processes like litigation and arbitration. It is understood as an ad hoc process of settlement of disputes at best and a kangaroo court at worst, in sharp contrast to the gravitas associated with litigation and arbitration. The question I therefore propose to discuss here is whether mediation is just another ADR? Or is there a jurisprudential basis for it? Is mediation backed by any theories of law?

In my very limited understanding of jurisprudence, I believe that mediation has a foundational basis in one of the most ancient jurisprudential theories, viz. the Natural Law Theory, before it was replaced by the Theory of Legal Positivism. The idea here is not to do an in-depth treatise on mediation and jurisprudence but to place this idea before a larger and more learned audience for either contestation or corroboration and to possibly initiate a discussion on whether mediation has a more qualitative role to play in the realisation of justice.

Having conducted mediation training programs for lawyers and judges all over India, I have come across, without exception, expressions of incredulity and surprise, when the realisation dawns that mediation is not just an ad hoc process or a kangaroo court, where parties are advised, counselled, and, may be, even coerced and bullied into reaching an agreement. The delegates are surprised to discover the sophistication and the fine nuances of the process, the complexity of the mediator's role, and they simply cannot believe that it is not mediation if the parties do not determine the outcome.

As we all know, our present system of jurisprudence – our courts, legislatures and institutions of justice – are based on the "Positive Law Theory", later called "Legal Positivism". John Austin (1797-1859) defined law as "A rule laid down for the guidance of an intelligent being by an intelligent being having power over him." This theory of law contemplated a sovereign-made law which would be distinct from law based on reason and morality, in other words "Natural Law".

In contrast, the Natural Law Theory maintains that law should be based on reason, morality and goodness. The Natural Law Theory, owing its origin to the Greeks and the Stoics like Socrates, Plato and Aristotle, argues that the higher law or the common law, as distinguished from localised customs and conventions, should be based on nature. The Stoics argued that there was a "rational and purposeful" order to the universe and law has to be discovered through the use of reason and an understanding of what is good and what is evil. Though people like Augustine and Aquinas later conflated Natural Law with Divine Law, I am restricting this discussion to Natural Law as defined by the Stoics.

Our legal system today is based on the Theory of Legal Positivism symbolised by the institutionalised justice delivery system. Viewed from the prism of rendering justice, the question arises as to whether this system has always succeeded in rendering "complete" justice. I have asked this question, particularly to judges, whether they have come across a situation where reason and common sense tell them that one of the parties is right, but the law favours the other party and hence they have had to decide in favour of the other party, much against this voice of reason. And the answer has always been "Yes, several times". Even the Supreme Court has held that, where there is a conflict between "law" and "equity", law has to prevail. In other words, Legal Positivism means "rule of law" that may not necessarily result in "rule of justice" threatening the maxim "Fiat Justitia Ruat Caelum" (Let Justice be done, though the heavens may fall). Legal Positivism confines "justice" in a strait jacket circumscribed by laws, leading to a possible conflict between "justice according to law", or "legal justice" and "justice according to conscience" or "complete justice" proving Mr. Bumble right in his lament in Oliver Twist "If the law supposes that, the law is a ass – a idiot".

By saying this, I am, by no means, trying to undermine our justice delivery system or stating that it doesn't serve the purpose. Our justice delivery system has stood the test of time. It has served to protect the rights of citizens; struck down laws taking away those rights; intervened whenever executive, money or muscle power have sought to trammel those rights. However, at the micro level of reciprocal rights and obligations between people arising out of either civil, commercial, personal or even communal and social relationships, conflicts do arise between "legal justice" and "complete justice". Can this apparent conflict be reconciled wherever necessary?

Here is where mediation fills the gap. My argument (subject to contest/corroboration by better and more informed minds) is that, mediation is based on the Natural Law Theory which gives primacy to reason and the human aspiration for peace and harmony. So what happens in a mediation that can possibly lead to this reconciliation between "legal justice" and "complete Justice"? The mediator, who is specially trained for this purpose, (emphasis deliberate) works with the parties to help them to understand their fears and concerns; to identify their underlying interests as opposed to their stated positions; to look at each other's perspectives and understand the dispute as a problem common to both; to explore options to solve the dispute; and to mutually agree on a solution that is best for both, thus giving a closure to the conflict. The use of reason and empathy to lead to understanding and resolution, is mediation. What the mediator does NOT do is to allow the parties to dwell in the past and to indulge in fault-finding, which is what litigation and arbitration are all about – viz. assertion of perceived rights and proving of past wrongs, demanding adjudication either by granting reward or imposing punishment. Adjudicating the dispute based on past wrongs may lead to an exacerbation of disharmony and discord. Since fault-finding is not the purpose of mediation, it is free of the constrictions of procedural or evidentiary laws. As Rumi said, "Out beyond the ideas of right-doing and wrong-doing, there lies a field. I will meet you there".

It is possible that mediation may not always work; many disputes can only be resolved through adjudication. Interpretation of law may be needed. Sometimes vindication and vendetta may be an all-consuming need. Then of course the time-tested methods of adjudication are always available, though taxing on resources, time and stamina. Mediation works on reason and emotion and on the subliminal effects of apology and forgiveness; it focuses on putting the past behind and looking to the future; and it capitalises on the innate human need of peace and well-being. Isn't this what the Natural Law Theory is all about? And why can Natural Law, on which mediation is based, and Positive Law on which our legal institutions are based, coexist, complementing each other wherever necessary?

What is needed today is a better understanding of the process of mediation and to use mediation to complement the existing legal system. The tendency to treat mediation as a poorer cousin of litigation and arbitration will go only if we recognise that mediation is not just an ad hoc process but has its own jurisprudential moorings and may also serve to reconcile any conflict, as and when it arises, between "legal justice" and "complete justice". As a matter of fact, with rising conflicts at different levels and with their multiple manifestations both domestically and globally, we are compelled to relook at our roles as lawyers. Are we gladiators fighting for our clients in the modern colosseums called courts, or mercenaries offering our fighting skills to the highest bidders? Or do we need to reimagine our role as problem-solvers and peace-makers who can help our clients to solve their disputes in a least expensive and most peaceful way that will also heal the hearts and the souls? There is a compelling need for a paradigm shift not just in our mindsets but in also how legal education and training is framed for our future lawyers. I see a lot of hope, when I visit universities to conduct training programs in mediation, and see how the idea of peace-making is so easily embraced by our future legal eagles.

A.J. Jawad is a mediator and trainer based in Chennai. He is one of the founder-trustees of the Foundation for Comprehensive Dispute Resolution (FCDR) based in Chennai and international faculty for India on the panel of ADR ODR International UK. He is also a mediator-trainer on the panel of the Mediation and Conciliation Project Committee of the Supreme Court of India.