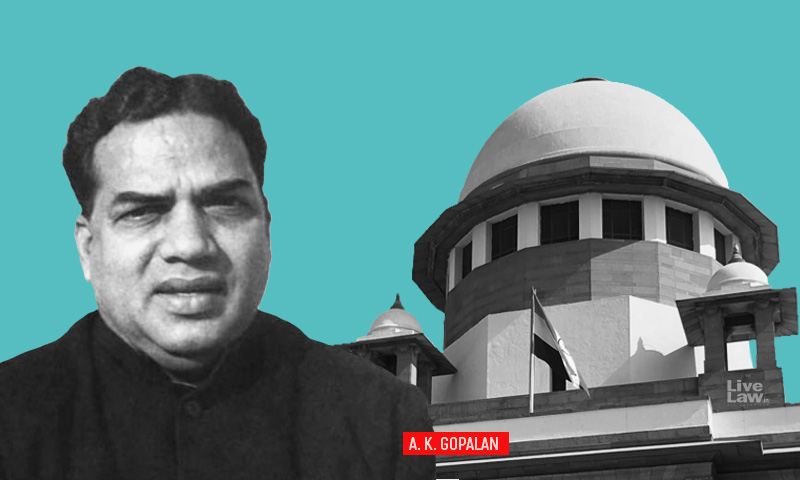 On 19th may 1950, exactly 70 years ago, a landmark judgement was pronounced by a Constitution Bench comprising Chief Justice H J Kania, Justice Fazal Ali, Justice Patanjali Sastri, Justice M.C Mahajan, Justice Ranjan Sudhi Das and Justice B.K. Mukherjea - A K Gopalan vs State of Madras. About the Case A.K Gopalan, famous communist leader, who was the petitioner in this...

A.K Gopalan, famous communist leader, who was the petitioner in this case filed the petition under article 32 (1) of the Constitution of India for a writ of habeas corpus against his detention in the Madras Jail. The issue was whether preventive detention of an individual can be justified merely on the ground that it had been approved as per Article 21 of the Constitution, which says "procedure established by law,". Or, whether that procedure is justified only when it is corroborated with principles of natural justice?

Mr. Gopalan, challenged the legality of the order of his arrest on various grounds which opened wide range of issues before the judiciary and supreme court of India. Court discussed the contours of constitutional interpretation on the major question with respect to the scope and applicability of Art. 21.

A narrow view of the Article 21

Court took the narrow lane to interpret the term "procedure established by law" which means procedure established by law made by the State, that is to say, the Union Parliament or the Legislatures of the States. Court refused to construe the expression given in the Article 21 in the light of the meaning given to the expression "due process of law" in the American Constitution. According to Justice Kania, Das & Mukherjea that the word 'law" has been used in the sense of State-made law and not as an equivalent of law in the abstract or general sense embodying the principles of natural justice. Furthermore, According to Justice Patanjali Shashtri "Law" in Art. 21 does not mean the jus naturale of civil law but means positive or State-made law.

Dissenting opinion of Justice Fazal Ali in this case is considered as the first famous dissent in the Indian judiciary. As per Justice Fazal Ali's dissenting view, the interpretation of the word "procedure establish by law" also implying "procedural due process" which means that no person can be left without giving the chance of audi alteram partem as it is a principle of natural justice.

He further laid the emphasis stating that "procedure established by law" must include the four principles of elementary justice which have been stated by the American Courts and jurists as it holds the root of all civilized systems of law, namely (1) notice, (2) opportunity to be heard, (3) impartial tribunal and (4) orderly course of procedure. Therefore, the words "procedure established by law", essentially contain the principle that no person shall be condemned without hearing by an impartial tribunal.

Judicial review is the supremacy granted to judiciary to examine the constitutionality of the legislative enactment or executive orders if it is ultra vires to the Constitution then it will be declared void. The doctrine of judicial review was influenced from US constitution wherein for the first time the case for judicial review discussed in the case of Marburi Vs Madison 5 U.S. (1 Cranch) 137 (1803) where Justice Marshall observed that "It is emphatically the province and duty of the judicial department to say what the law is. Those who apply the rule to particular cases, must of necessity expound and interpret that rule. If two laws conflict with each other, the courts must decide on the operation of each"." Further, it says "So if a law be in opposition to the constitution; if both the law and the constitution apply to a particular case, so that the court must either decide that case conformably to the law, disregarding the constitution; or conformably to the constitution, disregarding the law; the court must determine which of these conflicting rules governs the case. This is of the very essence of judicial duty". Chief Justice Kania in this A.K. Gopalan case (1950) wherein he pointed "that the inclusion of article 13 (1) and (2) in the Constitution appears to be a matter of abundant caution. Even in their absence, if any of the fundamental rights was infringed by any legislative enactment, the Court has always the power to declare the enactment, to the extent it transgresses the limits, invalid".

So, it can be said that A.K Gopalan case acts as the foundation edifice judgement for the Judicial Review in India, and laid the groundwork for the jurisprudence on Due Process of Law in Maneka Gandhi vs Union of India (1978). Several landmark judgements including Supreme Court Advocates on Record Association vs Union of India, (Writ Petition (Civi) No.13 of 2015), Justice K.S.Puttaswamy case (2017) and other noted verdict were pronounced on these principles.