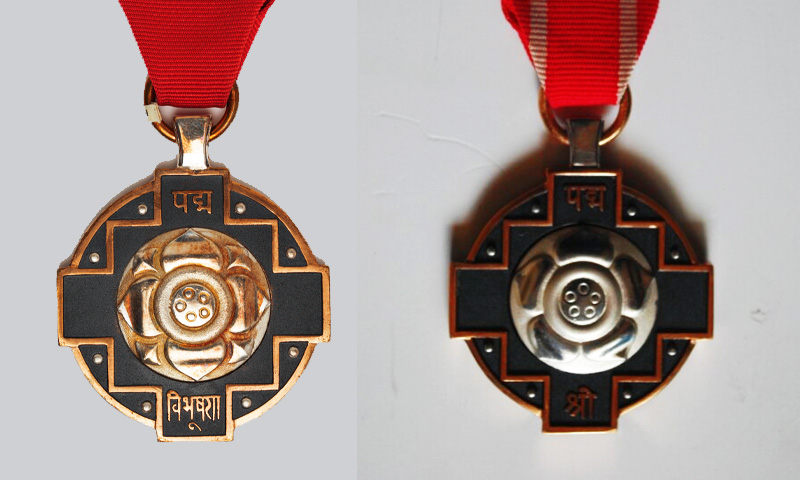 The History of Award-CultureIn Ancient and Medieval times the Kings and Monarchs conferred titles and granted awards to recognise merit in the fields of Art, Science and Literature. Conferring titles and awards has always been part of "Royal Prerogatives" of the King on any citizen with a rank and title which carries with it the title a social status, monetary rewards and most...

In Ancient and Medieval times the Kings and Monarchs conferred titles and granted awards to recognise merit in the fields of Art, Science and Literature. Conferring titles and awards has always been part of "Royal Prerogatives" of the King on any citizen with a rank and title which carries with it the title a social status, monetary rewards and most importantly, special privileges like seating in the Court of the King or invitation to official functions of the King like coronation and official Banquets and Ceremonies. "Navratna" is a Sanskrit Term which came to be recognised as a group of nine extraordinary people in the King's Court. Chandragupta I the founder of Maurya Dynasty did not have any such Navratna. However his Grandson Chandragupta II or better known as "Vikramaditya" had illustrious persons as Navratna namely Varahmihira(the great Astronomer) and Kalidas(arguably the best Poet from India).

In Medieval History the most notable ensemble of "Navratna" was in the Court of Emperor Akbar. 'Birbal' part of legendary folklore 'Akbar-Birbal' who was known for his wisdom and wit. Tansen the sublime musician with his singing could bring the rains by singing 'Raag Megh Malhar' were also part of Akbar's legendary "Navratna" at the Court. 'Todar Mal' the brilliant administrator and reformer to name a few.

Regarding recognition and awards in the Movies and Literature, private associations have become far more important than any state or government. The Academy Of Motion pictures Arts and Sciences based in Beverley Hills, California, USA gives the 'Academy Awards' or 'Oscar Awards'. Academy is a private group of individuals but it's endorsement of a Movie or a star has become the byword for excellence and quality in the field of motion pictures.

'Nobel Prize' set up by Alfred Nobel the person who invented 'dynamite' and 'balistice' is a Trust which gives away the famous 'Nobel Prize'. The backdrop of Nobel Prize is that the inventor of dynamite was so traumatised by the potential for damage by his creation that he instituted the peace prize for maintaining peace in the World.

According to Nobel's Last Will dated 27th November,1895, the Peace Prize shall be awarded to the person who in the preceding year "shall have done the most or the best work for fraternity between nations, for the abolition or reduction of standing armies and for the holding and promotion of peace congresses." Every year Nobel prizes are given for contribution in fields of chemistry, literature, peace activism, physics, and physiology or medicine.

Napoleon and the French Enlightenment

In the Last quarter of 18th Century the ideas of Democracy, Liberty and Equality gained momentum . The American War of Independence in 1776 and the French Revolution of 1789 resulted in the new concept of Governance which was not by heredity but based upon merit and democracy. The Concept of 'Royal Prerogative' under went a Sea change .

French Revolution saw the rise of Napoleon, the leader of the revolutionaries who wanted the ancien regime of the Monarchs to go and everything associated with the Monarchy was sought to be changed and a New Enlightenment had gripped France and slowly all of Europe.

Napoleon abolished the earlier French Orders of Chivalry which were awarded by the Monarchs of the ancien regime.

However in 1802 Napoleon instituted the 'Legion of Honour' to reward and commend Soldiers and Civilians. It is said that Napoleon created these awards and titles to ensure political loyalty.Subsequently to everyone's Surprise Napoleon Crowned himself the 'Emperor' in 1804 despite being the Hero of the French Revolution which was against the concept of Monarchy and Kings.

The Crowning Ceremony of the French Republic was held on December 2, 1804 in the Notre Dame Cathedral at Paris where the Pope crowned Napoleon as the 'Holy Roman Emperor.' The French Revolution had come Full circle From Monarchy to Monarchy within a short span of 14 years

The 'legion of Honour' was accused of giving Political favours, gifts and concessions to undeserving persons.The same 'legion of honour' still exists and the Awards are being given by the Modern French State for recognition of outstanding Merit.

'Magna Carta and English Knights' and its Continuance in India

In England the Monarch was vested with the Divine Right to Rule but his Power was distributed through a number of Earls, Knights, Dukes and Barons known collectively as 'Peerage'. Interestingly these Earls, Knights and other members of Peerage were instrumental in forcing King John I to concede the Magna Carta to the people of England in the year 1215.

'Magna Carta' translated into English means the " Great Charter Of Liberties" which was the first attempt to keep a check on the unbridled and arbitrary exercise of the Power by the King since ancient times. Lawrence James the Celebrated British Historian has put it very well in the following words:

"Apart from guaranteeing the Freedoms and Liberties in the Medieval Ages the Magna Carta also had implicit principle that the Great Men of the Realm had a duty to represent the nation as whole and fickle overbearing Kings to Account.. There was a contract between the Crown and the Kingdome and the magnates had the men to enforce it.."

Therefore in England this idea that the members of 'peerage' were in certain ways superior to other men and were 'noble' and came to be known as 'Nobility'.

In the aforesaid Backdrop conferring of Royal Titles was a coveted thing in the "British System". The practice of conferring titles was extended to India under British rule post 1857.

Therefore titles and Honours conferred by the British was also viewed by the Freedom fighters as a kind of association with the English Government and Officials. In the year 1919 Rabindranath Tagore famously returned his Knighthood to protest against the atrocities of the British Government after the reprehensible Jallianwala Bagh Massacre where innocent persons were killed by armed soldiers of British government.

Thereafter the Independence Movement in India denounced the British system of governance including the practice of conferring title such as Rai Bahadur, Diwan, Maharaja, KCI etc. It was perceived that those Indians who wanted to curry favour from the British government were conferred these titles.

After independence from British Rule, titles were abolished by Article 18 of the Constitution of India, thereby prohibiting any title conferred by the state with 2 exceptions- 'military or academic'.

National Awards and Honours had been adopted even before the Constitution of India was formally drafted. On February 13, 1948, the Prime Minister's Committee on Honours and Awards was set up under the Chairmanship of the Constitutional Adviser to the Government of India, Sir B.N. Rau. It's purpose was to recommend the number and nature of civil and military awards; the machinery for making recommendations for the granting of these awards; the frequency with which they were to be awarded, etc. The Committee worked on the premise that orders and decorations, carrying no title, were not meant to be prohibited. Its report on March 9, 1948 and gave extensive suggestions in respect of each of the subjects upon which it had been required to give its recommendations.

Constitutional Challenge in the Supreme Court of India

In 1995 the Challenge to the National Awards was heard by a Constitution bench of 5 Judges of the Supreme Court of India in the case of Balaji Raghavan vs Union Of India reported in 1996 (1) SCC 361.

The question formulated by the Court was "Whether the Awards, Bharat Ratna, Padma Vibhushan, Padma Bhushan and Padma Shri (hereinafter called "The National Awards") are "Titles" within the meaning of Article 18(1) of the Constitution of India?"

The challenge to the National Awards was on 2 grounds: One, that Article 18 prohibits any title to be awarded by the State which bar would extend to National Awards and Two that there is a hierarchy of awards namely Bharat Ratna, Padma Vibhushan, Padam Shri etc which creates inequality and hence violative of "Equality' guaranteed under Article 14 of the Constitution of India

Mr G Ramaswamy the then Attorney General for India opposed the plea and submitted that almost "all the countries in the World including those with the Republican and Socialist Constitutions follow the practice of Conferring the awards for Meritorious Services rendered by it's citizens".

He also submitted that the object of enacting Article 18 was to abolish titles which were granted to Indians who curried favour with the British and Republican nations across the world have similar awards for meritorious Services. Hence National Awards do not violate the Right to Equality guaranteed under Part III of the Constitution Of India.

The Supreme Court considered debates in the Constituent Assembly regarding Article 18 and how it came to be incorporated. Various Socio-cultural and other aspects were considered by the Members of the Constituent Assembly during the Debates.Mr. Santosh Hegde, Sr Advocate (who was subsequently appointed as an Hon'ble Judge of Supreme Court) was the Amicus appointed to Assist the Court and the Bench appreciated the Amicus Curiae .

The Supreme Court of India Vide it's Judgment dated 14th December,1995 authored by the then Chief Justice of India A.M.Ahmadi for himself and three other Hon'ble Judges namely Mr Justice B P Jeevan Reddy,Mr Justice N P Singh and Mr Justice Saghir Ahmad by in an erudite judgment[5] upheld the constitutional validity of the National Awards, and directed that a High Level Committee be set up to fix guidelines for conferring the Awards. It was also observed by the Supreme Court that the Committee can take into account the experience over the years regarding National awards and how to prevent their misuse, suggesting restricting of the number of awards that may be granted.

Justice Kuldeep Singh wrote a separate opinion while agreeing with the majority opinion authored by Chief Justice AM Ahmadi on behalf of himself and four other judges. However Justice Kuldeep Singh suggested that a national level committee be appointed by the Prime Minister in consultation with the President of India and it may comprise other constitutional functionaries like Chief Justice of India, leader of Opposition. Also at State Level it may be appointed by the Chief Minister in consultation with the Governor and such other persons deemed fit which shall recommend the names to the Central government Committee. The State Government Committee would only be a recommendatory body and the Central Government Committee would be the final authority which will confer the awards.

National Awards should be conferred on relevant considerations of Merit and Extraordinary Contributions in the field of Arts,Culture and Science because they encourage the citizens of India to excel in their respective fields. Persons involved in the conferring of awards should not be influenced by extraneous considerations like favour to political party in power or preference to a particular region, class or community. National Awards have the noble object of promoting excellence necessary for the nation building.