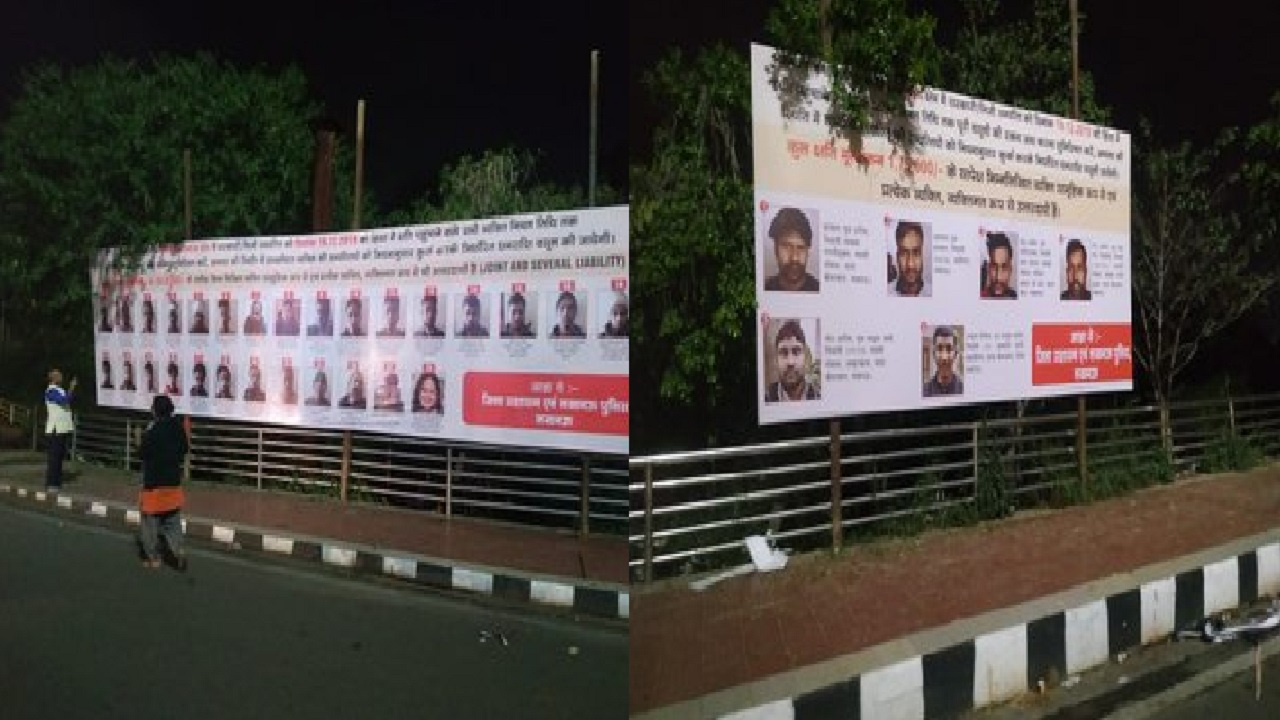 Appearing for Uttar Pradesh government in the Supreme Court, the Solicitor General of India placed quite a heavy reliance on a judgment of the Supreme Court of the United Kingdom viz. in the matter of an application by JR38 for Judicial Review (Northern Ireland), (2015) UKSC 42, to justify the 'Name and Shame' banners erected by Uttar Pradesh administration. The March 9 judgment of...

Appearing for Uttar Pradesh government in the Supreme Court, the Solicitor General of India placed quite a heavy reliance on a judgment of the Supreme Court of the United Kingdom viz. in the matter of an application by JR38 for Judicial Review (Northern Ireland), (2015) UKSC 42, to justify the 'Name and Shame' banners erected by Uttar Pradesh administration.

The March 9 judgment of Allahabad High Court had directed the removal of these banners erected by the UP administration in Lucknow revealing the pictures, identities and addresses of persons alleged of committing violence during anti-CAA protests. The point which the Solicitor General wanted to make is that there is waiver of the right of privacy once a person is in the public domain and that the State is justified in erecting such banners. A larger bench of the Supreme Court will now consider the appeal against the Allahabad High Court judgment.

The intent of this article is to examine the judgment of the UK Supreme Court quoted by the Solicitor General before the Supreme Court bench. The Court, in its order, says that the SG placed reliance particularly on paragraphs 2, 3 and 73 of the decision. The same are reproduced here, as they aptly summarize the judgment itself.

2. The young man who is the appellant in this case is now 18 years old. He was born on 16 July 1996. On 23 and 26 July 2010 two newspapers, the Derry Journal and the Derry News respectively, published an image of him. He was at that time barely 14 years old. These photographs had been published by the newspapers at the request of the police. The publication of the appellant's photographs and those of others who had been involved in public disorder in Londonderry was part of a police campaign known as "Operation Exposure" which was designed to counteract sectarian rioting at what are called "interface areas" in parts of Derry. Interface areas are situated at the boundaries of parts of the city which are predominantly inhabited by one or other of the two main communities.

3. The appellant argues that publication of photographs of him constituted a violation of his article 8 rights. The Divisional Court in Northern Ireland (Morgan LCJ, Higgins and Coghlin LLJ) dismissed his application for judicial review on 21 March 2013.

73. The importance of detecting and prosecuting criminal offenders, the prevention of future crime and the diversion of young people from criminal activity are self-evidently objectives of the first order of importance. In concrete terms in this case, dealing with sectarian violence at interfaces in Derry, which showed alarming signs of persistence and escalation, was obviously a pressing police and community priority. This was reflected in the concerns expressed by community leaders in the meetings referred to in paras 13 and 14 above. There is no question therefore that the objective of Operation Exposure was sufficiently important to justify an interference with the article 8 right.

The facts, issues involved and the determination by the Court are clear from the above paragraphs. But the devil lies always in the details.

Article 8 of the European Convention on Human Rights (ECHR)

Unlike Indian Constitution, the European Convention on Human Rights, in explicit terms, recognize the Right to respect for private and family life. The Article 8 reads as follows.

1. Everyone has the right to respect for his private and family life, his home and his correspondence.
2. There shall be no interference by a public authority with the exercise of this right except such as is in accordance with the law and is necessary in a democratic society in the interests of national security, public safety or the economic well-being of the country, for the prevention of disorder or crime, for the protection of health or morals, or for the protection of the rights and freedoms of others.

'Operation Exposure' Is Not 'Name and Shame'

As is evident from the above quoted paragraphs of the decision, the Supreme Court was concerned with a case of a person who alleged that the publication of photographs of him, as part of 'Operation Exposure' constituted a violation of his article 8 rights. Reading of paragraph 16-19 of the UK SC judgment would reveal that the Operation Exposure is an investigation system to identify a crime suspect. It is stated that, only when it is impossible to identify a suspect by internal police procedures, the question of releasing images to outside agencies is considered.

In UP case, the banners had come up at a major road side with personal details of more than 50 persons those accused of vandalism during Anti CAA protest. The poster sought compensation from the accused persons and further to confiscate their property, if they failed to pay compensation. Thus it is vivid that the objective of 'Operation Banner' is not to identify the suspected rioters, but to name and shame them. The Advocate General, while objecting to Suo Motu PIL registered by Allahabad HC, had made it clear that the object of displaying personal details of the individuals is to deter the mischief mongers from causing damage to public and private property. The High Court had recorded thus:

"It is submitted by learned Advocate General that the object of installing the banners with identity of certain persons is only to deter citizens from participation in illegal activities. The placement of banners with details of the accused persons at conspicuous place is in a larger public interest and, therefore, the Court must not interfere with the same."

The case was heard by a bench of five judges. Two of them, Lord Kerr and Lord Wilson held that though it amounted to an interference with the appellant's right to respect for his private life, so as to fall within the scope of article 8 of the European Convention on Human Rights and Fundamental Freedoms, such an interference was in accordance with law and in pursuance of a legitimate aim; and that it is "necessary in a democratic society". The judgment by Lord Kerr observed thus:

"Plainly, some means of identifying those involved in the rioting had to be found. Sectarian violence at interfaces in Derry could not be allowed to continue. This not only put at risk vulnerable and elderly people living in the area, as well as the young people involved in the violence themselves. It was corrosive of the good community relations in Derry which so many agencies are trying to promote. I am satisfied that publication of the photographs was, in this instance, truly a measure of last resort. I do not consider that a less intrusive means of achieving the objective of Operation Exposure was feasible."

The other three judges, Lord Clarke, Lord Toulson and  Lord Hodge, though agreed with the final conclusion, observed that the present case does not even amount to interference. The following observations made by these three judges are interesting:

I should make it clear that I do not suggest that there could never be circumstances in which publication of the photographs which are the subject of this case could fall within the scope of the appellant's article 8 rights. Photographs can become historic and re-publication of material which was once properly in the public domain may give rise to a valid complaint. In R (Catt) v ACPO the court, applying the test of reasonable expectation of privacy, held that the systematic retention of personal details about a person on police files for a period of years was within the scope of article 8. But we are concerned with publication, in the recent aftermath of criminal activity, of photographs taken of public rioting for the purpose of identifying those involved. (Para 101)

I agree with Lord Toulson that on the facts here the criminal nature of what the appellant was doing was not an aspect of his private life that he was entitled to keep private. He could not have had an objectively reasonable expectation that such photographs, taken for the limited purpose of identifying who he was, would not be published. I would not however hold that the mere fact that a person is photographed in the course of a criminal activity deprives him or her from the right to prevent the police from publishing the photographs. Thus, if the photographs had been published for some reason other than identification, the position would have been different and might well have engaged his rights to respect for his private life within article 8.1. (Para 112)

So it is clear that the UK SC judges who decided the judgment quoted by the Solicitor General of India before the Indian Supreme Court were not concerned with a case akin to UP banners.

The UK Supreme Court judgment quotes a decision rendered by European Court of Human Rights in Sciacca v Italy (2005) 43 EHRR 400. In the said decision, it was held that article 8 is attracted by the publication of a person's photograph in newspapers even where they were under investigation for (and subsequently convicted of) criminal behaviour. That was a case of police releasing to the press a photograph taken of the applicant while under arrest. Lord Kerr distinguished this decision as follows:

"Of course, clear distinctions can be drawn between the Sciacca case and the present appeal. In that case it was not considered necessary, as it was here, to publish the applicant's photograph for the purpose of identifying her. Also, she was not engaged in criminal activity at the time the photograph was published. Moreover, it might be said that she had a reasonable expectation that a photograph taken as part of conventional police procedures would not be published without her consent. But the case is notable in the present context for its unqualified statement of principle that the publication of a photograph falls within the scope of a private life. Thus, while even a 14 year old child might not have a reasonable expectation that his photograph would not be taken if he engaged in rioting in a public place, different considerations arise when it comes to the publication of the photograph."

On this, Lord Toulson observed thus:

Sciacca v Italy (2005) 43 EHRR 400 was, as Lord Kerr has explained at para 44, a case where the police released to the press a photograph taken of the applicant while under arrest. There is no difficulty is seeing that the applicant had a legitimate expectation that the police would not make use of her photograph in that way, but it is a very different question whether a member of a crowd engaged in a violent Page 33 disturbance in a public place has a legitimate expectation of protection from the police seeking the help of the public to identify those involved.

Therefore, the UK SC judgment was in the context of publishing photographs of individuals for the purpose of identifying them, whereas now the Indian Supreme Court is concerned with a case of Government erecting a banner containing personal details of alleged rioters already identified by them.