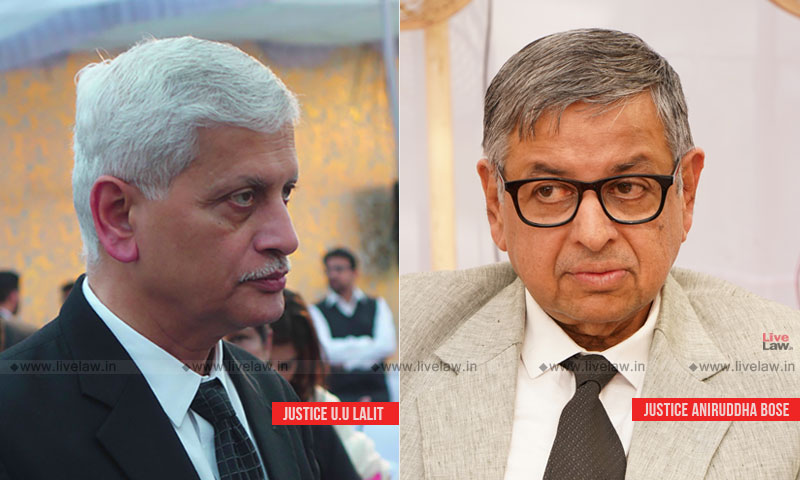 The Supreme Court's order of reference in the UP Banner's case does not sufficiently mirror the seriousness shown by the Allahabad High Court in a matter affecting fundamental rights of citizens and governance in accordance with rule of law. The Allahabad High Court had directed the 'forthwith' removal of hoardings and posters erected by the UP administration publishing the names,...

The Supreme Court's order of reference in the UP Banner's case does not sufficiently mirror the seriousness shown by the Allahabad High Court in a matter affecting fundamental rights of citizens and governance in accordance with rule of law.

The Allahabad High Court had directed the 'forthwith' removal of hoardings and posters erected by the UP administration publishing the names, addresses and photographs of persons accused of causing violence during anti-CAA protests.

The HC passed the direction in a suo moto case - after a special sitting held on a Sunday - on the finding that the erection of banners, admittedly done without the backing of any law, amounted to an 'unwarranted interference in privacy'.

Challenging this before the vacation bench of the Supreme Court, the argument advanced by Solicitor General Tushar Mehta for State of UP was that persons who had committed violence in public have waived their 'right to privacy'.

Though the bench comprising Justices U U Lalit and Aniruddha Bose repeatedly asked the SG regarding the law which supported the putting up of banners, the SG could not cite any statutory provision which backed the State action. The SG instead referred to certain paragraphs from the nine-judge bench decision in Puttaswamy case on restrictions on right to privacy. The decision in R. Rajagopal v. State of Tamil Nadu, (1994) 6 SCC 632, which held that a convicted criminal cannot claim right to privacy to stop publication of a book on his criminal acts, was also cited. Further, the SG also cited a UK decision, which had upheld the action of police in publishing the photographs of a child rioter.

However, all these arguments assume relevance only if the primary threshold on the three-prong test for infringement of right to privacy is crossed -that is the existence of an enacted law which enables the invasion of privacy.

As per the Supreme Court decision in K.S.Puttaswamy case, any action by the State or its agencies which curbs or restricts the right to privacy of a citizen should pass each of the following three tests:

The case of UP Government stumbles down at the very first level itself, due to the absence of an enacted law.  Mere executive instructions do not fulfill this requirement. This fact  primarily weighed with the High Court in holding the State action to be illegal. As can be seen in the HC judgment, the Advocate General conceded before the Court that the banners were placed without the support of any law.

Therefore, the arguments of UP government in the SC are lacking basic foundation.

It is not that the SC judges could not comprehend this aspect. Justice U U Lalit observed during the hearing that such a 'drastic step' by the State should be covered by law. Justice Aniruddha Bose also concurred and remarked that State's actions must be empowered by law.

Yet, the bench ultimately referred the matter to a larger bench to be heard next week, without recording any prima facie satisfaction about the arguments of UP government.

"Considering the nature of the matter and issue of significance involved therein, in our view, the matter be placed before a Bench of at least Three Judges as early as possible and preferably in the week commencing 16th March 2020".

There is no mention about the issues involved in express, concrete terms.

Now, one may wonder what is the harm in such a reference. Here, one needs to remember that it was a suo moto case taken by the HC after an emergency sitting on a Sunday, taking note of the urgency of the matter.  The fundamental rights of the persons depicted in the unlawful banners are getting infringed minute by minute. As the banners could operate as an invitation for lynching by extra-State actors, the party respondents expressed before the Supreme Court apprehension of danger to life.

It is also to be noted that these persons have not been found guilty by a court of law, and that their challenges to recovery notices issued by administrative officers are pending in courts. The time periods mentioned in the recovery notices for payment of the alleged losses are not yet over. In these circumstances, the action of UP administration appears as disproportionate and high-handed even going by terms of ordinary prudence. Even child rapists and hardened criminals are not subjected to such ignominy.

It was taking note of these factors that the HC passed the order, after terming the state action to be a "public unjust happening just before it(court)".

The High Court elaborated on the justification for suo moto action as follows :

"The Court in such matters is not required to wait necessarily for a person to come before it to ring the bell of justice. The Courts are meant to impart justice and no court can shut its eyes if a public unjust is happening just before it".

In this backdrop, the SC ought to have passed directions to ensure immediate compliance of the directions of the HC, given that it did not think it fit to grant a stay. In fact, it is a mystery as to why no stay was sought by the Solicitor General, despite making an urgent motion before the vacation bench.

The HC had ordered the 'forthwith' removal of the posters. But, the UP Government approached the SC without complying with the same. Therefore, UP Government was in contempt of the directions of the HC, when it was in the Supreme Court, and could not demonstrate any legal source of power for its actions.  Despite that, the top court granted indulgence to it.

Amidst the tumultuous phase of civil liberties in India since the passing of the Citizenship Amendment Act 2019, some High Courts have been reassuringly protecting the rights of citizens from the excesses of the State. We have seen High Courts declaring Section 144 orders to be illegal, overturning internet shutdowns, ordering probe into police excesses, and upholding citizens' right to protest. In contrast, the response of Supreme Court, starting from issues such as Kashmir lockdown, has been passive and evasive.

The reference order passed in the present case, without even a finding of prima facie case for admission of SLP,  disappoints those who were expecting strong actions from the apex court for protecting fundamental rights.