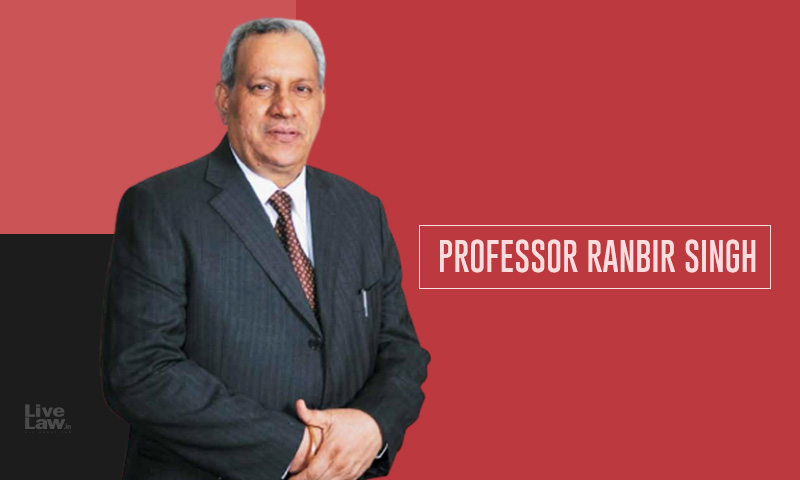 Professor Ranbir Singh is widely respected as a great institution-builder and a celebrated academic leader in the legal world. After serving as the founding Vice-Chancellor of two National Law Universities, that is, NALSAR, Hyderabad, and National Law University, Delhi, for more than twenty years, he is going to retire next week. He is a great and innovative law teacher and a wise and...

Professor Ranbir Singh is widely respected as a great institution-builder and a celebrated academic leader in the legal world. After serving as the founding Vice-Chancellor of two National Law Universities, that is, NALSAR, Hyderabad, and National Law University, Delhi, for more than twenty years, he is going to retire next week. He is a great and innovative law teacher and a wise and very important academic leader who has made a Himalayan contribution to the Indian legal education system for many years. He is a very kind, humble, and generous scholar who is deeply admired in society. He has an encyclopedic legal knowledge, surpassing analytical intelligence, and superb judgment. He writes with extraordinary clarity and precision. He has an unparalleled gift for a concise but accurate summary and thought process. He speaks less and listens more. He is an open-minded scholar who welcomes ideas and thoughts. He respects dissenting views and democratic discussions and encourages others too. He is a masterful teacher, admired colleague, and beloved guide. As a follower of Professor N R Madhava Menon and Professor Upendra Baxi(two outstanding Indian law professors and jurists), he has always been a strong champion of quality legal education and research in India. His mission, vision, and life inspire many and would always continue to inspire generations. Professor Singh's life is a source of inspiration. He is a self-made scholar and a laborious teacher.

Ranbir Singh was born in September 1949 at Village Atta in District Panipat, Haryana in a well-educated farmers' family. Having completed his schooling, he joined the Kurukshetra University, Kurukshetra for his collegiate education, wherefrom he obtained B.Sc., LL. B, LL.M, and Ph.D. Degrees. He had plans to become a scientist but destiny brought him to the legal field. He belongs to the first batch of the Law Faculty of the Kurukshetra University, Kurukshetra in Haryana. After earning a doctorate in Law, he joined the Faculty of Law. Kurukshetra University and taught there till 1978. Thereafter he shifted to Maharshi Dayanand University, Rohtak as the founding Faculty and continued there till 1996 in various capacities such as Professor, Head, Dean, and Proctor. During his tenure, the MDU conducted many programmes of national importance. On invitation from the National Law School of India University, Bangalore, he served as Professor of Law at the National Law School of India University during 1996-97.

In 1998, the NALSAR, Hyderabad was established by the Andhra Pradesh legislature. Professor Singh was appointed its first Vice-Chancellor who served this university for ten years. During his leadership in the NALSAR, the university touched all heights in the academic world. In 2008, the Delhi Legislative Assembly established the National Law University, Delhi, and Professor Ranbir Singh became its founding Vice-Chancellor. He has served this university for more than 12 years. Now he is demitting his office after successfully completing his tenure.

Notably, during his academic tenure as the Vice-Chancellor of two reputed universities, Professor Ranbir Singh has also been associated with several committees, bodies, and commissions related to higher education and research, law and justice, and public governance. He has provided his worthy inputs to all these bodies. He is the Council Member of the Association of Commonwealth Universities, U.K. He is a member of the Eminent Persons Advisory Group of the Competition Commission of India. He is a member of the State Higher Education Council, Delhi. He is former President of the Association of India Universities and Shastri Indo-Canadian Institute. Currently, he is heading a high-level criminal laws reforms committee constituted by the Ministry of Home Affairs, Government of India. In addition to this, he is associated with hundreds of other academic committees and bodies in various capacities. He is the most sought-after law professor in the country whose advice is widely accepted and respected in the academic circles. The government takes his opinions on various issues relating to legal education and profession.

As an outstanding and internationally-known academic leader, Professor Singh has been a source of great inspiration for many law teachers, students, judges, and civil servants in the country. Many institutions seek his advice to improve the quality of legal education and research. As a member of the Legal Education Committee of the Bar Council of India, he has done remarkable work in redesigning the legal education curriculum. He also gave his inputs in many reports that were submitted to the government for reforms in the public governance system. He has been invited as an expert in UPSC interviews and judicial service interviews conducted by the High Courts and State Public Service Commission many times. It is indeed very difficult to mention his participation in committees and commissions in this short piece. It needs a full volume.

Professor Singh is a legal scholar par excellence who has written many books and articles on a variety of issues relating to legal education, jurisprudence, human rights, constitutional law, and governance. He has supervised several doctoral students and encouraged them to be the part of the quality legal education system in the country. Today many of his students are serving the nation in different capacities like judges, civil servants, lawyers, vice-chancellors, professors, and so on. This is indeed a great satisfaction for a teacher who builds future of the nation.

For making a wonderful academic contribution and numerous achievements, Professor Singh has been honoured with many awards in India and abroad. Some of them are: Professor N. R. Madhava Menon Best Law Teacher Award, Life Time Achievement Award by Saveetha University, Excellence Award by MDU, Rohtak, and many others. The British Council had portrayed him as one of the 12 talented, creative, and generous spirits who are making great efforts to engage with the United Kingdom for strengthening the cultural relations.

A great visionary, an outstanding academic leader, a preeminent legal educator and an institution-builder, Professor Singh is a multi-faceted personality. His life gives us a message of deep enlightenment, hard work, sincerity, commitment to the cause of quality education, and excess to Justice. He is a source of constant inspiration for thousands of law students, lawyers, scholars, and judges. He is a self-made jurist who gave India the idea of advanced quality legal education, and research. The institutions that he has founded are testimonies of his great academic leadership, initiatives, and hard-work. His life journey would influence any reader who visits its different phases. A legal philosopher of international repute, Professor Singh deserves more appreciation. He is a great law teacher as well as a great academic administrator and educational reformer who is deeply committed to the noble cause of affordable quality education. He loves ideas; he loves legal discussion; conversations, reading, teaching, and writing. He hears others' views with patience, he considers them, and he accepts criticism if the critical views have powerful substance. He is fond of the intellectual exchange of arguments. He promotes tolerance and encourages his students and colleagues to respect dissenting views and academic freedom. That is what is expected from a great scholar and leader who runs the institution in its true spirit and vision.

Professor Ranbir Singh has demonstrated that hard work matters a lot. Today he is a towering academic figure and a highly respected man whose contribution is beyond description. We are all supremely lucky to have been his admirers. We need more such teachers in the country. I wish Professor Singh a very happy and healthy post-retirement life. May God bless him!