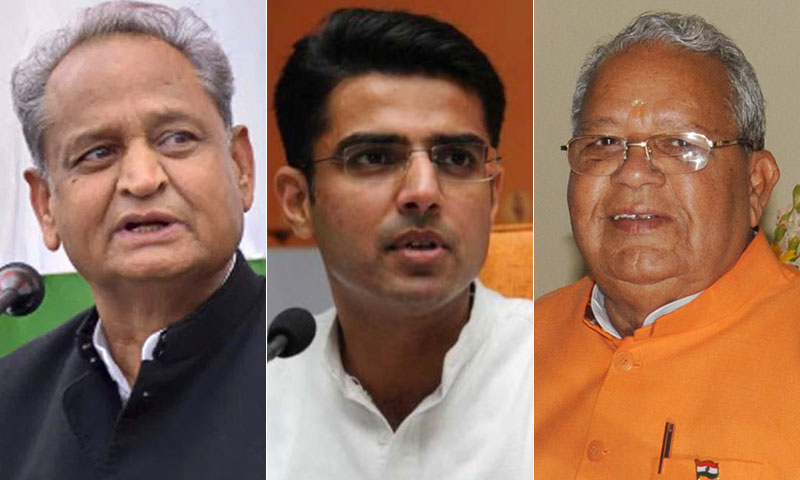 The political drama in Rajasthan has entered the 'second act', with the entry of Governor Kalraj Mishra into the scene.The spotlight shifted to the Raj Bhavan after the Chief Minister, Ashok Gehlot, sought to summon the house to prove the majority oh his government. This is apparently with the intention to bring the rebel MLAs led by the sacked Deputy Chief Minister Sachin Pilot back to the...

The political drama in Rajasthan has entered the 'second act', with the entry of Governor Kalraj Mishra into the scene.

The spotlight shifted to the Raj Bhavan after the Chief Minister, Ashok Gehlot, sought to summon the house to prove the majority oh his government. This is apparently with the intention to bring the rebel MLAs led by the sacked Deputy Chief Minister Sachin Pilot back to the fold by waving the threat of disqualification under Paragraph 2(1)(b) under Tenth Schedule of the Constitution.

The earlier attempt to initiate disqualification proceedings against the dissident MLAs under Paragraph 2(1)(a) of the Tenth Schedule -which deals with disqualification on the ground of voluntary giving up of party membership - could not yield any results for Gehlot as the Rajasthan HC stalled the process with an indefinite order of 'status quo'.

While the legality of the HC order is highly debatable for its apparent conflicts with the SC decision in Kihoto Hollohan case, without pondering much on that, the Gehlot camp has swiftly moved to the next strategy.

If the session is called and a confidence motion is put to vote, the dissident MLAs will have to support the government lest they run the risk of disqualification under paragraph 2(1)(b) of the Tenth Schedule. The argument raised by Pilot camp before the HC that violation of directives of the whip are not applicable to meetings outside the house will not come to their aid in a scenario under Paragraph 2(1)(b), as this provision clearly mentions that violation of party directions within the house will attract disqualification.

Hence, the convening of the house could work against the calculations of Sachin Pilot group.

It is in this backdrop that Governor makes the crucial intervention, by objecting to Chief Minister Gehlot's request to summon the house.

As per reports, Governor Kalraj Mishra has questioned the need for the session when the government is enjoying majority. The Governor has also reportedly said that the request was not preceded by a cabinet meeting and that no agenda was specified. He has also reportedly cited the risk of holding session amid COVID-19 pandemic.

The pertinent constitutional question which arises from this curious turn of events is this: can the Governor's discretion override the Government's demand to summon the session of legislature?

Sessions of the State Legislature, prorogation and dissolution
(1) The Governor shall from time to time summon the House or each House of the Legislature of the State to meet at such time and place as he thinks fit, but six months shall not intervene between its last sitting in one session and the date appointed for its first sitting in the next session.

(2) The Governor may from time to time
(a) Prorogue the House or either House;
(b) dissolve the Legislative Assembly

Referring to the presence of words "as he thinks fit" in Article 174, there is an argument raised by some that the Governor enjoys discretion in calling the session.

However, this argument was considered and rejected a Constitution Bench decision of the Supreme Court in Nabam Rebia and Bamang Felix vs Deputy Speaker and others in 2016.

The Constitution Bench, referring to Constituent Assembly Debates(CAD), noted that Article 153 was the provision in the draft Constitution which corresponded to Article 174.

The draft Article 153 had a sub-clause (3), which said that power to the Governor to summon and dissolve the House of the State Legislature "… shall be exercised by him in his discretion." However, in the final provision adopted by the CAD as Article 174, this sub-clause (3) was dropped.

From this, the apex court inferred that "the framers of the Constitution altered their original contemplation, and consciously decided not to vest discretion with the Governor, in the matter of summoning and dissolving the House, or Houses of the State Legislature".

Further, highlighting the facts that the Governor was not an elected authority and was a mere nominee of the President, the SC observed that "such a nominee cannot have an overriding authority, over the representatives of the people, who constitute the House or Houses of the State Legislature (on being duly elected from their respective constituencies) and / or even the executive Government functioning under the Council of Ministers with the Chief Minister as the head".

"Allowing the Governor to overrule the resolve and determination of the State Legislature or the State executive, would not harmoniously augur with the strong democratic principles enshrined in the provisions of the Constitution. Specially so, because the Constitution is founded on the principle of ministerial responsibility", said the judgment delivered by a bench comprising the then CJI J S Khehar, Justices Dipak Misra, Madan B. Lokur, P.C. Ghose and N.V. Ramana.

The Court added that accepting the argument that the Governor had discretion in such matters would "negate the concept of responsible government".

Because, the absence of any legislative responsibility would seriously interfere with the responsibility entrusted to the popular Government, which operates through the Council of Ministers with the Chief Minister as the head, the bench said.

On these premises, the Court concluded :

"In such view of the matter, we are satisfied in concluding that the Governor can summon, prorogue and dissolve the House, only on the aid and advice of the Council of Ministers with the Chief Minister as the head. And not at his own".

When the government is in majority, the power to summon the house has to be exercised by the Governor only on the aid and advise of the council of ministers.

As stated by the Court :

The Court also clarified that the Governor can call the house, invoking his personal discretion, without any aid and advise of the council of ministers, to demand a floor test when the circumstances indicate the Government has lost majority.

This situation is not applicable in the Rajasthan scenario, as all parties, including the Governor, assert that the Gehlot government enjoys majority.

Affirming the decision in Samsher Singh v. State of Punjab, 1974 (2) SCC 831, the SC in Nabam Rebia further stated the Governor has to act under the aid and advise of the Council of Minister under Article 163 of the Constitution. The Governor can exercise his discretion only in such situations where the Constitution expressly provides for it.

"The Governor cannot be seen to have such powers and functions, as would assign to him a dominating position, over the State executive and the State Legislature.

Ultimately, the Supreme Court quashed the decision of the then Governor of Arunachal Pradesh, J P Rajkhowa, to advance the Assembly Session from Januar 14, 2016 to December 16, 2015, on the ground that it was not taken with the aid and advise of the council of ministers. The assembly session advanced by the Governor had led to the passing of impeachment motion of the Speaker and the election of Congress rebel leader Kalikho Pul as the leader of the house.

The Court set the clock back to restore the status quo ante with as existed prior to December 16, 2015 and restored the Congress-led Nabam Tuki government.

The bench termed the Governor's actions "anti-democratic" and reminded him that he cannot act like an "all-pervading super constitutional authority".

"The Governor is not an ombudsman for the Legislature nor the Speaker's mentor. The Governor cannot require the Speaker to discharge his functions in the manner he considers constitutionally appropriate," the Court observed.

Emphasising that the Governor should not get involved in political issues, the Court added :

Going by the clear and unambiguous verdict of the SC in Nabam Rebia, the Rajasthan Governor cannot exercise discretion to override the demand of the Government to summon the house under Article 174 of the Constitution.