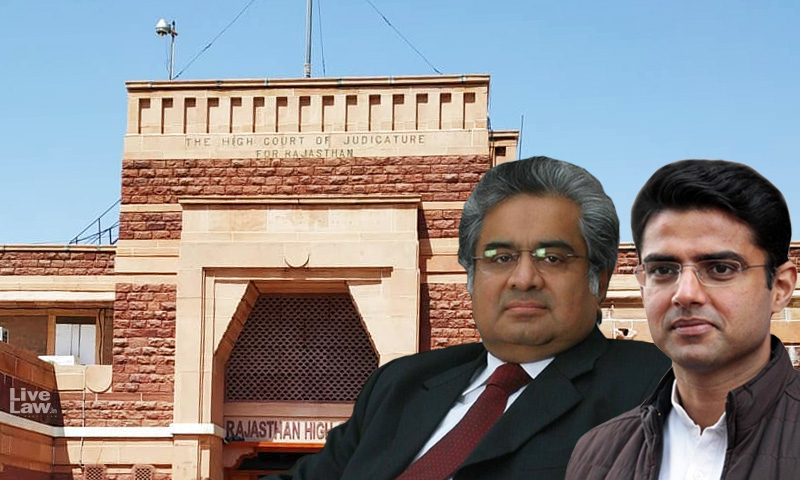 Expressing dissent against the party leadership, without switching over to any other party, will not amount to giving up of party membership, submitted Senior Advocate Harish Salve for the 19 dissident Congress MLAs led by Sachin Pilot before the High Court of Rajasthan on Monday."If a group of MLAs raise their voices against style of functioning of Chief Minister, that is not defection",...

Expressing dissent against the party leadership, without switching over to any other party, will not amount to giving up of party membership, submitted Senior Advocate Harish Salve for the 19 dissident Congress MLAs led by Sachin Pilot before the High Court of Rajasthan on Monday.

"If a group of MLAs raise their voices against style of functioning of Chief Minister, that is not defection", the Senior Advocate submitted before a bench comprising Chief Justice Indrajit Mahanty and Justice Prakash Gupta.

Salve, attending the virtual hearing from London, was making rejoinder submissions to the arguments made by the Speaker and the Congress Party Whip.

To buttress his argument, Salve extensively referred to the Constitution Bench judgment in Kihoto Hollohan vs Zachilllhu and others, which upheld the constitutional validity of the anti-defection law under tenth schedule of the Constitution.

In fact, the judgment had advocated the need to strike a balance to protect inner-party dissent, he submitted. Protesting against the party while staying within the party cannot be regarded as giving up party membership.

"Justice Venkatachaliah had observed in Kihoto judgment that this (inner party protest) is a grey area of 10th schedule. The 10th schedule law has to evolve", he submitted.

"Defection is when you leave Party A and joint Party B. Intra-party differences were not regarded as defection in Kihoto judgment", he added.

Salve asserted that there was no jurisdictional fact in existence enabling the Speaker to invoke Tenth Schedule against the 19 MLAs. The refusal to attend party meetings, in violation of the chief whip's directions, cannot be construed as giving up of party membership by any stretch of imagination.

"Chief Whip of the party sits inside the house and not outside. Whip is applicable only to house proceedings...

A party member is free to defy the party whip direction outside the house. Kihoto nowhere says that defying party whip outside house amounts to defection", he said.

Responding to the argument that the Court cannot interfere before a decision is taken by the Speaker, Salve submitted that there was no absolute bar against Court reviewing the Speaker's action anterior to the final decision. There can be such interference in exceptional circumstances. 'Mala fides' was a ground available to approach the Court for such relief, he stressed.

Salve highlighted the fact that the Speaker had appeared before the Court and vociferously stated that he was entitled to look into the materials produced by the complainant, the party whip. This, according to Salve, showed that Speaker has already made up his mind. Since the Speaker is already prejudiced, the petitioners are constrained to approach the High Court, he said.

"If a group of MLAs say that the Party President is incompetent, and the party president complains to Speaker that they have defected, and the Speaker issues notice for disqualification, can they not approach the Court against it?", he asked.

He advanced the argument that when Speaker issues show-cause notices under Tenth Schedule on outlandish complaints and on extraneous reasons, the Court can interfere.

"Even if the complaint allegations are assumed to be true, they will only constitute a case of inner party dissent. There is no case under 10th schedule", he said.

"Statement that we will bring down the Chief Minister's government and will bring our own government with the same party is part of right to dissent. Intra-party dissent, however shrill it may be, until the moment it goes to the extent of supporting another party, cannot be a ground to even start disqualification proceedings under 10th schedule", he added.

He asserted that issuing disqualification notices for expressing inner-party dissent is a violation of fundamental right to freedom of speech.

"If Speakers are permitted to act against legislators for speaking against party chief, that goes against right to dissent", he submitted.

Intra-party dissent, however shrill it may be, until the moment it goes to the extent of supporting another party, cannot be a ground to even start disqualification proceedings under 10th schedule : Salve@INCRajasthan @SachinPilot @ashokgehlot51

After Salve concluded his arguments, the bench rose for the day. It will hear Senior Advocate Mukul Rohatgi for the petitioners, and the intervenors in the case tomorrow morning.

The MLAs have time till 5.30 PM tomorrow for submitting their replies to the show-cause notices.

Earlier in the day, the Court had heard Senior Advocates Dr. A M Singhvi for the Speaker, and Devadatt Kamat for the Congress Whip, Manoj Joshi.

While Singhvi argued against Court interfering before Speaker taking a decision, Kamat submitted that the petitioners should be construed to have voluntarily left the party from their conducts such as open statements against the government and the refusal to attend party meetings.

Kamat referring to a Full Bench decision of Madras HC reported in AIR 1969 Madras 10. The Court refused to entertain a petition seeking writ of prohibition to prevent the Speaker from initiating contempt proceedings against a member for breach of privilege.#SachinPilot

Also, when the Chief Justice expressed surprise when he was told that two of the petitioners were suspended for anti-party activities.

The bench started hearing the matter on Friday(July 17) afternoon.