The Story Of Rajindar Sachar Becoming A Judge 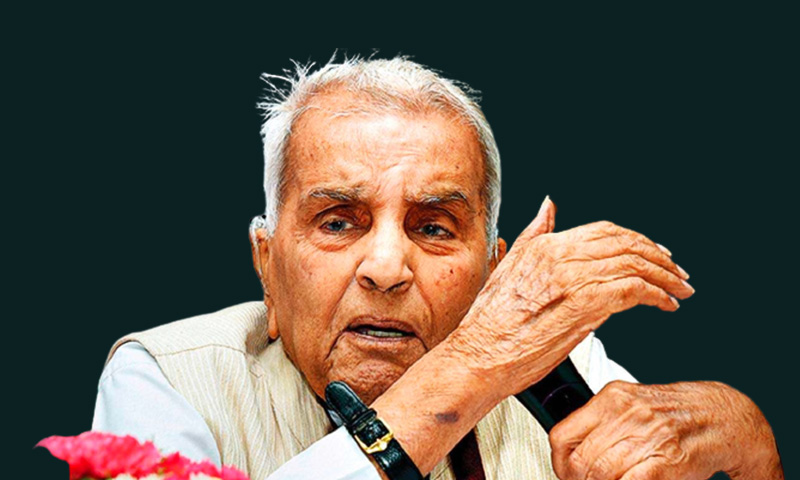 Rajindar Sachar, who was born on this day in 1923, retired as the Chief Justice of the Delhi High Court on this day in 1985. Widely known for his seminal report titled the "Social, Economic and Educational Status of the Muslim Community of India (better known as the Sachar Committee Report : 2006) and commitment for human rights and civil liberties, he also served as a judge of...

Rajindar Sachar, who was born on this day in 1923, retired as the Chief Justice of the Delhi High Court on this day in 1985. Widely known for his seminal report titled the "Social, Economic and Educational Status of the Muslim Community of India (better known as the Sachar Committee Report : 2006) and commitment for human rights and civil liberties, he also served as a judge of the Rajasthan High Court and the acting chief justice of the Sikkim High court. Unlike his tenure at the latter, his tenure at the Rajasthan High Court was a punishment posting for his refusal, along with a few other sitting judges, to accept the Emergency. He was brought back to the Delhi High Court after the Emergency was finally revoked in 1977.

Justice Sachar joined the bench in February 1970 as an Additional Judge of the Delhi High Court and, in July 1972, became a permanent Judge of the High Court. However, what is interesting to note is that becoming a judge was not his first preference. This, despite the fact that by the time that he was appointed judge, he had an impressive practice of nearly two decades. It was his father Bhim Sen Sachar, who was himself a noted lawyer and had also served as the Chief Minister of Punjab and the Governor of erstwhile Andhra Pradesh, had to convince him to take-up the judgeship. Justice Sachar's first preference was to do public service through active politics.

He recounts his journey of becoming a judge in his autobiography titled In Pursuit of Justice (Rupa Publications: 2020), which is being published posthumously. While in Chandigarh in 1969 and a few days before the winter break, his wife had informed him that the then Chief Justice of Delhi High Court, Mr. H.R. Khanna had called while Justice Sachar was out. He had known Justice Khanna since the mid 1950s. "My relationship with him was that of a lawyer appearing before a judge, based on something approaching mutual respect. So, I assumed he must have called to inform me about a vacancy at the Delhi High Court and to ask if I was agreeable to the idea of becoming a judge," notes Justice Sachar, further adding that it was only later on that he had learnt that it was, infact, Justice S.M. Sikri who had suggested his name to Justice Khanna.

"Upon reaching Delhi, I went to meet Khanna Saheb. He did his best to convince me that I should accept the offer of a judgeship … he was of the view that I should have been made a judge earlier in the Punjab High Court. Thanking him for his concern I replied that I was happy with the way things were. I was so relieved at refusing the offer that after returning to my sister and brother-in law's house, I decided that we should all go out for dinner!" recounts Justice Sachar. However, it was far from over as Justice Khanna was not willing to take no for an answer.

According to Justice Sachar, the following day, Justice Khanna met his father, who happened to be in Delhi, and told him about their meeting. His father, who valued public service above everything else had a chat with him: "Beta, why won't you accept the offer of judgeship? If you feel you are not comfortable, you can leave. Unless, of course, you think you want to go on making money." To which Justice Sachar replied that "My decision had nothing to do with wanting to earn more. If that had been my goal, I would not have valued my association with the socialists."

Hearing this, his father reasoned that if he was not money-minded, then "becoming a judge would be an ideal proposition, for it was a public service. Being a judge meant delivering justice to the people and upholding basic Constitutional principles." After this conversation, Justice Sachar agreed to the offer, albeit tentatively, and returned to Chandigarh.

However, before finally accepting the offer of judgeship, Justice Sachar tried to explore if there was a possibility for him to become a Rajya Sabha member. Before joining the bench, he was a noted political figure in Punjab and had considerable influence amongst the Socialists and had also served in the party in various capacities. Hence, before giving his consent to becoming a judge, he met George Fernandes, who then was the general secretary of the Samyukta Socialist Party (SSP).

"I met him at the airport (Fernandes was on his way to Kashmir via Chandigarh) and told him about the offer from Khanna Saheb and also that I was not very keen on the judgeship. I was still drawn to the idea of being in politics," he recounts. As per Justice Sachar, "the only problem was that the SSP could not become a major player in Punjab where the Congress, Akalis and Jan Sangh were entrenched due to historical reasons. In those circumstances, I could only be effective in politics if I were to be elected to the Rajya Sabha. To be elected to a Rajya Sabha seat from Punjab would be a tough proposition because of the prevailing political atmosphere."

Therefore, he told the socialist leader bluntly that if there was any possibility of accommodating him for a Rajya Sabha seat in any other state, he would be willing to forgo his appointment as additional judge. "George rightly could not give me any such assurance. So I accepted Khanna Saheb's offer, telling myself that as a judge, I might be able to contribute more effectively to upholding civil liberties and human rights and have empathy for the marginalized sections of society," notes Justice Sachar. Before becoming judge, he resigned from the Socialist Party.

His rational on becoming a Rajya Sabha Member instead of becoming a judge was that he felt that as a legislator, he could have had a greater political impact. "This is not to say that politicians who were not legislators did not wield enormous influence in those days—they did. The fact is, being a legislator enables significant contact with the public and the press," he notes. According to him, "In a democratic system, leadership coupled with a presence in the legislature is what gives real strength to political parties—they enjoy greater respect, and, I would say, are able to propagate their policies with greater impact." He goes on to note that "I feel that many of our leading social activists, such as Aruna Roy, who exclude themselves from the electoral fray, do not realize that without a political set-up and without a political presence in the legislature, the impact they have on public opinion and public support is much less."

What is remarkable to note is that despite being keen on becoming a Rajya Sabha member earlier (instead of becoming a judge), he never wished or tried to become one after his retirement, though he remained politically active till the last few days of his life. The reason behind this decision, it seems, was that it was unbecoming of a retired Chief Justice of a High Court to do so. Otherwise, it would not have been very difficult for him to get a Rajya Sabha seat, had he then wanted. His refusal to accept the Padma Vibhushan, India's second-highest civilian award in 2008 gives a hint into how he wanted to be remembered.

In his own words, "My reasoning was simple—it was not for the government to give out awards; recognition of merit or public service was best left to peer organizations. In my view, the government's involvement in such awards was not in consonance with the principles of equality and democracy. As always, the one person I always remembered at such times was my father, from whom I had learnt the lesson of being true to the principles of morality in public life. He always maintained that to do a task well is the reward itself."

(Mahtab Alam is a Delhi based multilingual journalist and podcaster. He writes on issues related to politics, law, media, human rights and tweets @MahtabNama. )