Honouring Ram Jethmalani's Inimitable Legacy: A Friend, Philosopher And Guide Of The Law 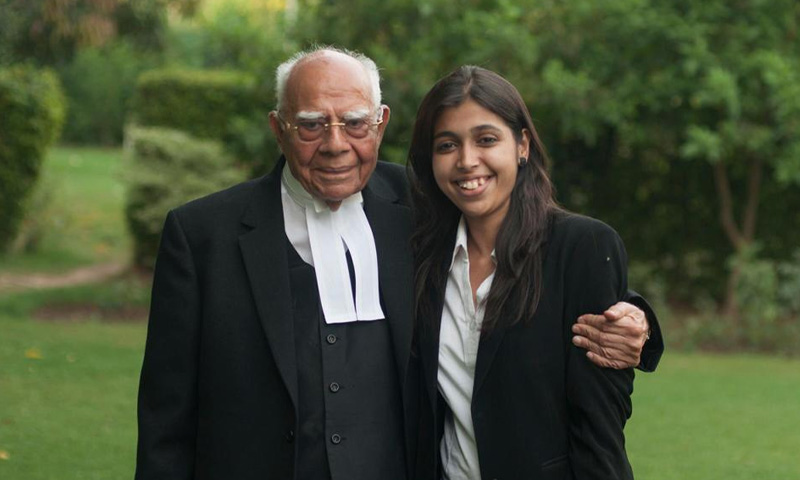 x
As law students and young legal professionals coping with the current landscape of the legal profession amid a pandemic, Ram Jethmalani's legacy and his penchant for finding the silver lining in every adversity must remain a source of constant motivation and drive.

Two years have passed since India lost one of its most enigmatic, passionate and astute lawyers in Ram Jethmalani. This time period gave us the opportunity to reflect and marvel at how poignant his principles were, which remain with us and will continue to do so even after the world has lost a colourful, charismatic and revered friend in him. From a precocious law student, becoming...

Two years have passed since India lost one of its most enigmatic, passionate and astute lawyers in Ram Jethmalani. This time period gave us the opportunity to reflect and marvel at how poignant his principles were, which remain with us and will continue to do so even after the world has lost a colourful, charismatic and revered friend in him.

From a precocious law student, becoming the youngest law graduate at the age of 17, to becoming a household name in the legal profession in India, Ram Jethmalani's journey to the very top of his vocation was one laden with challenges and hardship. Born in the midst of the quest for independence in 1923, his experiences in the aftermath of the partition, as well as his initial struggles to make ends meet in Mumbai tested his resolve and fortitude to rise above every obstacle that could come his way.

He began his practice in 1948, one year after the modern country of India was born. The story of Ram Jethmalani's career is also the story of India. The milestone of India's politics and history have shaped his career and many of the milestones of his career have left their imprint on the history of India. After winning his first-ever case to prove his mettle as one of the brightest young lawyers to enroll at the Bar aged just 18, he embraced his calling in the law, and went from strength to strength in establishing himself as one of the pioneers of the legal industry.

His undisputed mastery of criminal law and evidence, which drew the admiration of not just his peers and colleagues at the Bar, but of judges on the Bench hearing his arguments as well, came from his intricate attention to detail, and his passion for reading and delving into the most nuanced arguments right from the first interaction with the client. In his eyes, there was nothing more sacrosanct for a criminal lawyer than entering every case with an unprejudiced and impartial mind, and defending the hallmark of the presumption of innocence, he said:

"I decide according to my conscience who to defend. A lawyer who refuses to defend a person on the grounds that people believe him to be guilty is himself guilty of professional misconduct."

Right after law school, his first criminal case showed a creative flash, wherein a father of a girl demanded a dowry from an eligible suitor, even though normally a boy's family would demand dowry from the bride's family. The father then pocketed the money and called off the engagement. The suitor and his family discovered that the girl's father had pulled the same con game numerous times in the past, and they needed a lawyer. Luckily, they found Ram Jethmalani.

Usually, this would be argued as a breach of contract, but his argument was different. He said a breach of contract only occurs when a party enters a contract and subsequently changes his mind. In this case, the accused had no intention of honouring the contract. The intent was to commit fraud. From the beginning, they intended to cheat the suitor out of money. This was a criminal offence. His unexpected argument prevailed.

His steadfast convictions and strong opinions often ruffled the feathers of those who worked with him, especially during his days as a parliamentarian and politician. But for Mr. Jethmalani, his belief of what he felt was just and right always drove his actions above everything else, even when it came at the cost of upsetting those with opposing world views and ideologies. He was the force behind ensuring the establishment of the freedom of information legislative reform in India, which finally resulted in the form of the Right to Information (RTI) Act in 2005. A staunch proponent of public accountability and reform, he spearheaded the initiation of the reform as he believed that access to information is the prerogative of the public to exercise adequate checks and balances on those in power, who have been elected to serve the citizens at large.

He was perturbed by the growing problem of money laundering in the country too, filing a petition before the Supreme Court of his own accord in order to cease the menace of black money. While an SIT was constituted by the Supreme Court to investigate into the claims unearthed by Mr. Jethmalani's petition, the case still remains unresolved. While he had the most enviable repertoire of any lawyer in the country, representing the biggest names as clients ranging from the Emergency, Rajiv Gandhi's assassination to the 2G scandal, it was his fierce, uninhibited, and of times, unscrupulous convictions which defined his legacy and the values he cherished.

Learning The Law: His Love For Teaching And Interacting With Students

Forever a student of the law, Mr Jethmalani's intimidating command over the law came as a result of his deep love for reading and immersing himself in books. It was this fascination for reading which developed the acumen and the insight which distinguished Mr. Jethmalani from every lawyer in the country, going over every case file with microscopic precision, listening rapturously to every word of his client, and culling out every possible argument that could further bolster his case. And there was no greater joy for him than sharing these experiences with his favourite cohorts – his students.

His interaction with students in law colleges across the country, whether it be through guest lectures on evidence law, or of sharing his innumerable courtroom experiences, would never fail to amaze and inspire the next generation of lawyers, who would listen with starry eyes, treasuring every word from one of the stalwarts of the legal profession.

Mr. Jethmalani's influence and pivotal role in establishing the first National Law School at Bangalore in 1988 illustrated his views on the kind of legal reform which the country had been waiting for – independent institutions that valued instilling core values and quality legal education with minimal role of the State. Returning to the University as a visiting faculty, taking unmissable lectures on evidence law filled with his characteristic anecdotes from his plethora of criminal trial experiences, he was also a revered figure as a guest faculty at numerous law schools such as Symbiosis Law School Pune and GLC Mumbai, who remember their association with him fondly to this day. The law students who got an opportunity to intern with him got a chance to learn from his experiences and more than anything from his style of working and handling things.

As law students and young legal professionals across India continue to adapt and cope with the current landscape of the legal profession in light of the covid-19 pandemic, Ram Jethmalani's legacy and his penchant for finding the silver lining in every adversity must remain a source of constant motivation and drive. While the new normal of virtual hearings, online cross-examinations and e-filing continues to present new and unpredicted challenges, the path to continuous growth and development in the legal paradigm for any budding lawyer, according to Mr. Jethmalani, is in finding the zest and passion for the law. He often used to claim that going threadbare through a case file and observing court proceedings are irreplaceable learning experiences for anyone trying to learn the trade of being a lawyer and will end up teaching you more than any course or lecture ever will.

Ram Jethmalani had a storied legal career, inspiring countless lawyers plying the trade today as a result of his stature and presence in the legal community, and a reputation he had built after decades of hard work, patience and perseverance. But his love for the law was matched by his love for interacting with students, teaching them the values which had held him in the greatest stead through his years as a member of the Bar. As we honour his legacy on his second death anniversary, we are reminded of how Ram Jethmalani epitomized everything which law students and budding legal professionals should aspire to be, and was the mentor they needed at every step of their journey, to flourish and grow into great lawyers like him.

Special thanks to Mr Sumit Chatterjee (Law Student, Vth year, NLS Bangalore) for his contribution in the article.