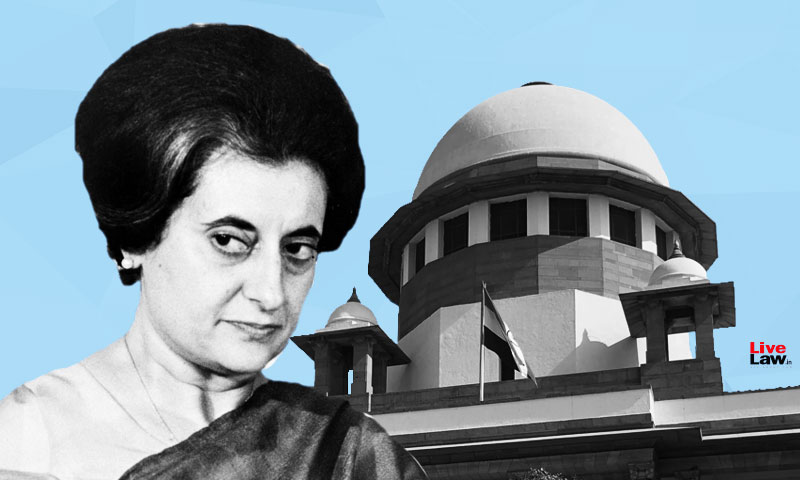 10 August 2020, marks the 45th anniversary of the Constitution (Thirty-Ninth Amendment) Act, 1975. The Constitutional Amendment was passed during the infamous Emergency in India, with the aim of nullifying the Allahabad High Court's judgment which had quashed Mrs. Indira Gandhi's election on grounds of electoral malpractice. The Amendment took away the power of the Supreme Court...

10 August 2020, marks the 45th anniversary of the Constitution (Thirty-Ninth Amendment) Act, 1975. The Constitutional Amendment was passed during the infamous Emergency in India, with the aim of nullifying the Allahabad High Court's judgment which had quashed Mrs. Indira Gandhi's election on grounds of electoral malpractice.

The Amendment took away the power of the Supreme Court to try electoral disputes concerning the President and Vice-President and vested this power in a separate body (to be formed later). It also granted the Prime Minister immunity from the electoral laws applicable prior to the amendment.

Subsequently, a body was created in the year 1977, shortly before the general elections. The intention behind its creation was to save Mrs. Gandhi's seat, if her election was challenged. In a volte face, Mrs. Gandhi's party lost the elections to the Janta Party and Shri Morarji Desai was sworn in as the Prime Minister. Mr. Desai's election was unsuccessfully challenged before this very Tribunal and soon thereafter, the body was disbanded.

This post shall discuss the events pertaining to the 39th Amendment, its dilution by the Supreme Court in Indira Nehru Gandhi v. Raj Narain's case and its overhaul by the 44th Amendment. It shall also briefly discuss the story of the Election Tribunal created by the central government and its subsequent disbandment.

39th Amendment and the Supreme Court:

In a major setback for the then central government, the Allahabad High Court in Raj Narain v. Indira Gandhi (delivered on 12 June 1975), invalidated Mrs. Gandhi's election on grounds of electoral malpractice. She was further debarred from holding any elective office for six years. Not willing to step down, Mrs. Gandhi challenged the decision before the Supreme Court and obtained a conditional stay i.e. she could remain in office as the Prime Minister but could not vote in the Parliament till the appeal was decided by the Supreme Court. Dissatisfied from the stay order and owing to the pressure from the opposition parties to resign from office, Mrs. Gandhi imposed the infamous national emergency in India thereafter. (Read more)

Mrs. Gandhi's election appeal was listed before the Supreme Court on 11 August 1975, however, a day prior i.e. 10 August 1975, the 39th Amendment was passed in the Parliament. Accordingly, the hearing was adjourned.

The Amendment brought significant changes to the provisions concerning the elections of the President, Vice-President, Prime Minister and the Speaker of Lok Sabha. It inserted a new Article 329-A and also replaced Article 71 with a new provision.

Article 329-A inter alia provided that:

The intention behind the Amendment was crystal clear i.e. to ensure that Mrs. Gandhi continues as the Prime Minister and the challenge to her election is dropped. The amendment aimed to achieve this by rendering the judgment of the Allahabad High Court as invalid, due to Article 329-A(4) and by ensuring that her election proceedings before the Supreme Court are disposed due to Article 329-A(5).

Mrs. Gandhi's election appeal was next heard by the Supreme Court on 25 August 1975, where a challenge to the constitutional validity of the Article 329-A(4) was also made. The Supreme Court, overruled the Allahabad High Court's judgment and upheld Mrs. Gandhi's election, however, it struck down Article 329-A(4), on the ground that it violated the Basic Structure Doctrine (Indira Nehru Gandhi v. Raj Narain, AIR 1975 SC 2299). No challenge was made to the rest of the Amendment, and hence it was valid.

Revocation of the Emergency and General Elections:

On 18 January 1977, it was announced by the central government that general elections would be conducted in the country. Several reasons are attributed behind the call for elections, but there is no conclusive answer till date. Before the polling, Mrs. Gandhi got President Fakhruddin Ahmed to promulgate the Disputed Elections (Prime Minister and Speaker) Ordinance, 1977 pursuant to Article 329-A of the Constitution. The ordinance created a 9-member body that would try any dispute arising from the election of the Prime Minister or the Speaker. Its composition was – 3 elected members from the Lok Sabha, 3 elected members from the Rajya Sabha and 3 members nominated by the President.

The timing and the composition of the body was strategic, as if a challenge to Mrs. Gandhi's election was made (provided she won), a body dominated by Congress members would adjudicate it (Congress members dominated both the Lok Sabha and Rajya Sabha).

The election results were shocking for the Congress, as the Janta Party won with a landslide. Mrs. Gandhi resigned on 22 March 1977 and Shri Morarji Desai was sworn in as the new Prime Minister. Interestingly, Mr. Desai's election was unsuccessfully challenged before the above-mentioned special body, where he was represented by Shri Fali Nariman.

Undoing the wrongs of the 39th Amendment-

The Janta government tried to undo the wrongs of the Emergency, on coming to power. On 18 April 1977, Law Minister Shanti Bhushan introduced a Bill to repeal the Disputed Elections (Prime Minister and Speaker) Ordinance, 1977. The Disputed Elections (Prime Minister and Speaker) Act,1977 restored to the Supreme Court, the power to decide the disputes over the elections of the Prime Minister and the Speaker. It stated that disputes over these elections shall be adjudicated by a special body consisting of a Single Member who is a Judge of the Supreme Court, nominated by the Chief Justice of India.

Subsequently, the Janta government passed the Constitution (Forty Fourth Amendment) Act, 1978 (also known as the Mini-Constitution) which repealed Article 329-A and reinstated the original text of Article 71 of the Constitution. The Article restored the Supreme Court's power to adjudicate disputes arising out from the elections of the President and the Vice President.

In the year 2014, the current BJP government repealed numerous obsolete laws and amongst them was the Disputed Elections (PM & Speaker) Act 1977. Since the 44th Amendment had repealed Article 329-A, the Disputed Elections Act had no real purpose and hence, was rightly repealed. In the past, the Constitution has been significantly changed by strong governments, for personal gains. The dark period of the Emergency reminds us of the same.

(The author is a practising lawyer. The article was first published on his personal blog The 'Basic' Structure. The author does not wish to offend or disrespect any member of the political or legal fraternity with this post. The facts and events stated in it have been reported in the public domain).

Maintainability Of Writ Petition Against A Party That Ceases To Be "State"
Latest News
+ More
1'As If Some Gazetted Officers May Not Be Of Much Repute': Calcutta HC Sets Aside Order Requiring Two 'Reputed' Gazetted Officers To Stand As Surety
2Five Reasons Why Aryan Khan Was Given Clean Chit In The Cruise Ship Case
3Set Up Adequate Number Of Drug Rehabilitation Centres In State: Meghalaya High Court To State Govt
4Reluctance Of Judges To Conduct Virtual Proceedings Not In Alignment With Tech Advancements, Expected To Ensure System Is Put To Use: Delhi HC
5Supreme Court Issues Notice To Kerala Govt On Plea Seeking Desilting Of River Sands On Yearly Basis Before Arrival Of Monsoon
6Ensure Strict Compliance With S. 14 SARFAESI Act For Giving Physical Possession Of Secured Asset To Financial Institutions: Allahabad HC To UP Govt
7Entitlement Of Employee To Salary/ Pension Is Intrinsic Part Of His Rights To Life & Property Under Articles 21 & 300A: Orissa High Court
8Can't Compel Party To File Documents On Which It Did Not Rely Except For Certain Specific Eventualities Mentioned In CPC: Delhi High Court
लाइव लॉ हिंदी
+ More
International
+ More
1Is The Green Hydrogen Policy A Viable First Step Towards Power/Energy Security?
2Abortion Laws In The US And Other Countries
3Leaked Draft Judgment Of US Supreme Court Indicates Overruling Of Roe v.Wade Abortion Rights Decision
4The Indian Connection With Pak Decision To Live-Stream Court Proceedings
Environment
+ More
1Supreme Court Permits E-Rickshaws In Matheran As Pilot Project To Check Feasibility
2In Case Of Doubt, Protection Of Environment Would've Precedence Over Economic Interest: SC Revokes Approval For Doubling Castlerock to Kulem Railway Line
3NGT Bars Auroville Foundation From Township Construction Till Environmental Clearance Is Obtained
4Ghazipur Landfill Fire: NGT Says Dump Sites In Cities Are Like 'Time Bombs', Constitutes Joint Committee Headed By Former Delhi High Court Judge