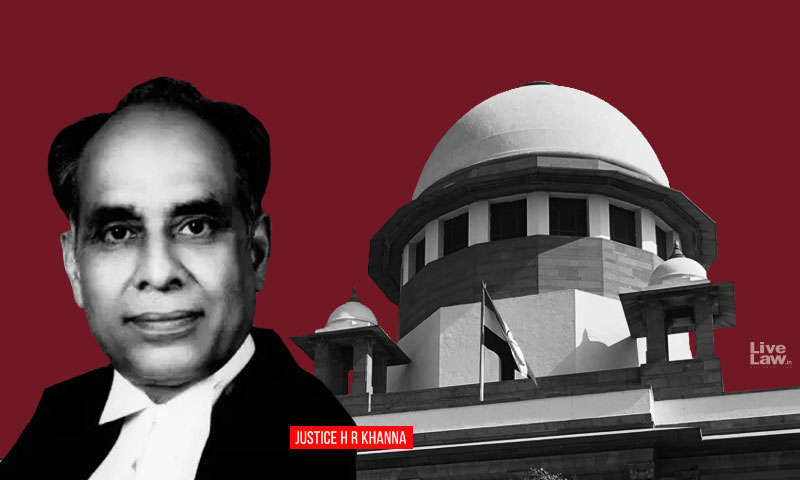 In April 1976, when the infamous Emergency was in place in India, the New York Times wrote an article eulogising a Judge of the Indian Supreme Court, for his dissenting opinion in a judgment. The article titled 'Fading Hope in India' lauded Justice H.R. Khanna for his dissenting opinion in ADM Jabalpur v. Shivkant Shukla, (1976) 2 SCC 521, which was delivered 44 years ago today.The case...

In April 1976, when the infamous Emergency was in place in India, the New York Times wrote an article eulogising a Judge of the Indian Supreme Court, for his dissenting opinion in a judgment. The article titled 'Fading Hope in India' lauded Justice H.R. Khanna for his dissenting opinion in ADM Jabalpur v. Shivkant Shukla, (1976) 2 SCC 521, which was delivered 44 years ago today.

The case in ADM Jabalpur arose during the period of Emergency in India (1975-1977). The President exercising his powers under Article 359 (i.e. Suspension of the enforcement of fundamental rights during emergencies) issued a presidential order suspending the rights of the citizens to approach the Courts for enforcement of their fundamental rights under Article 21 (i.e. the Right to Life and Liberty). The period of Emergency saw widespread human rights violations by the government and its authorities. The government had detained prominent opposition leaders all across the country.

The detainees had approached their respective High Court against the detentions and majority of the Courts held that the citizens had a right to approach the Courts for a violation of Article 21, in any situation whatsoever. The government challenged the said High Court orders before the Supreme Court. The matter was heard by a Constitution Bench consisting of 5 Judges in ADM Jabalpur.

It is believed that the Attorney General of India Mr. Niren De, who had appeared for the government in contentious cases before, was unwilling to defend the stance of the government that during an emergency even the right to life could be suspended. However, the government strong armed De by threatening to revoke the residency rights of his British wife, to ensure his appearance in Court. De later claimed that through his arguments he tried his best to shock the judges into reason so that they reject the government's defence.

During the hearing, Justice Khanna asked De, 'In view of his submissions would there be any remedy if a police officer because of his personal enmity killed another man?' De responded, 'consistently with my argument, there would be no judicial remedy in such a case so long as Emergency exists'. He further said, 'It may shock your conscience, it may shock my conscience but consistently with my submissions, no proceedings can be taken in a Court of law that score'. It is believed that De went on to argue that during an Emergency even if a person was to be killed by the security forces in the presence of the Justices, they would remain helpless.

The majority judges (4:1) infamously held that in light of the presidential order, in situation of an Emergency, citizens had no right to approach the Courts for a violation of their fundamental rights. In effect, the Court left a detainee remediless as long as the Emergency continued. The lone dissenter Justice H.R. Khanna held that life and liberty cannot be at the mercy of the Executive and the rule of law does not allow the government to detain an individual without a trial. Justice Khanna ultimately held that a citizen's right to approach the Courts could not be suspended even during an Emergency.

Justice Khanna wrote in his autobiography, that before the pronouncement of the judgment he along with his family went to Haridwar. While sitting on the banks of river Ganga, he told his sister 'I have prepared the judgment which is going to cost me the Chief Justiceship of India.'

After the judgment was pronounced, Justice Khanna found a perceptible change in the attitude of the government towards him. He was no longer invited to the official dinners hosted by the government for foreign delegates and other formal events, where other Judges were invited. Further, as a consequence of his dissent his premonition came true as he was superseded for the position of the Chief Justice of India and instead Justice M.H. Beg (junior in seniority) was appointed.

Justice Khanna explained the incident in his biography. He wrote, that on 28 January 1977 he went to Court as usual but had a feeling that it would be his last day there. At 5pm on radio, he heard the news regarding the appointment of Justice M.H. Beg as the Chief Justice of India. He immediately typed out his resignation letter to the President of India.

Although the dissent in ADM, costed Justice Khanna the Chief Justiceship, it gave him something more. His fearless dissent at a time like the Emergency made him immortal and he gained the respect of people across the world. Shri Nani Palkhivala rightly said, that for a man of the stature of Justice Khanna, the Chief justiceship of India could have added nothing.

It is often remarked that the Judges abdicated their constitutional oath of upholding the Constitution and performing their duty without fear or affection, while delivering the judgment in ADM. Years later, a Judge on the Bench while regretting his decision in ADM Jabalpur remarked that the Emergency was a fearful time and everybody was scared. The only Judge who did not let fear or favour act as roadblocks to his constitutional oath, was the Great Justice H.R. Khanna.

'If India ever finds a way back to the freedom and democracy that were proud hallmarks of its first eighteen years as an independent nation, someone will surely erect a monument to Justice H.R. Khanna of the Supreme Court.'

The monument was indeed erected and hangs today in the form of a portrait in Court No.2 of the Supreme Court of India today.

[P.S : In 2017, in KS Puttaswamy v. Union of India, famously known as Right to Privacy judgment, the SC ruled that the judgment in ADM Jabalpur was per incuriam and overruled the same.

"I fully agree with the view expressly overruling the ADM Jabalpur case which was an aberration in the constitutional jurisprudence of our country and the desirability of burying the majority opinion ten fathoms deep, with no chance of resurrection.", Justice S K Kaul observed in his judgment in Puttaswamy].

(The author is a lawyer practicing in New Delhi. The post was first published on his personal blog "The 'Basic' Structure".

The author does not wish to offend or disrespect any member of the legal fraternity with this post. The facts and events stated in it have been reported in the public domain. The author has relied on three primary sources which are : 'The Judges of the Supreme Court of India (1950-1989)' by Gadbois Jr. and 'Neither Roses nor Thorns' by Justice H.R. Khanna).