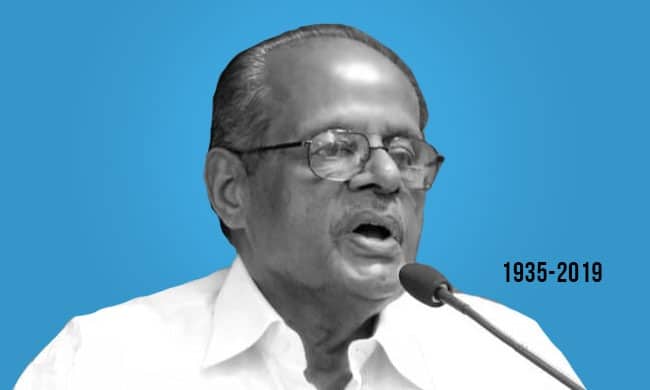 The life of Prof. Madhava Menon is a great book of teachings: vision, values, dedication and integrity. Prophet and a pragmatist, architect and a mason. Historical narratives attempt to catalogue great teachers, those who spent their life as passionate social investments: investments for no material returns or offices. One indelible common characteristic of any of them is that they were drawn...

The life of Prof. Madhava Menon is a great book of teachings: vision, values, dedication and integrity. Prophet and a pragmatist, architect and a mason. Historical narratives attempt to catalogue great teachers, those who spent their life as passionate social investments: investments for no material returns or offices. One indelible common characteristic of any of them is that they were drawn to changing the world, the specific world which they encountered. If biographies of such wonderful and rare beings are condensed into common denominations, what stands out is that their in-consummate thirst to think, share and change. The ups and downs and the curious unlit corridors of their careers and pursuits get submerged in the grand narratives of their seminal ideas, and unique contributions.

While the rare and revealing facets of Prof. Menon's life- a humble teacher, caring husband, and an ideal parent- and all the travails of life he faced will soon be written, it is important to talk about him, passionately remember him and to canonise him if that helps in any sense, for all that he has done for legal education, justice education, colossal institution building, grooming a long line of promising teachers of the current generation, and building bridges between Law teaching, Judicial institutions, Judges and Governments. The idea of writing about such remarkable and unique Persons is not to stop with mere epitaphs but to plant into public consciousness and memory the moral and social relevance of lives of such wonderful beings.

It is commonly believed that Prof. Menon's position in the Bar Council of India Trust in the early 80's was instrumental in his launching the great National Law School in Bangalore. But not many knew that the seeds of those challenging ideas and the dreams were sown when he was called upon to head a little known infant institution, the Government Law College, Pondicherry in the year 1974. As one of his students there, fortunate to have enjoyed the sweep of his intellect and the restless quest towards radical visions of legal education, I can recollect several days and occasions which revealed his deep engagements and glimpses of laborious motions of a pedagogic rebel. I remember being asked by him to read in the second-year of my three year law course, "The Pedagogy of the Oppressed".(Paulo Freire) Though much of that book went beyond me then, as reading Jean Paul Sartre or James Joyce, I could gather the burning persuasions of his mind to inject new meanings, new directions and egalitarian thrusts to Legal education.

The irrelevance of prevailing forms of legal education to justice, to social justice, and to community demands was a great conversation of his mind into which he drew all those whoever willing to be consumed by his fervour. But he did all that quietly and without public display of exhibition and attention seeking. The young and never dying command of his mind was what it was then as it was just few months ago when he visited Delhi last. By 1986, the soil was ready and the tillage complete for the setting up of the National Law School, Bangalore. When he declined a second term as the head of the Bangalore Law School, it goes to the credit of Jyoti Basu veteran public figure then Chief Minister of West Bengal to invite Prof. Madhava Menon to build the second Law University in Calcutta. True to the promise of the of the Chief Minister of no political interference, the university of Juridical Sciences became yet another grand march in changing the landscape of legal education. All these chronicles will be written in due course. With him law schools became R&D laboratories. It is a pity that large number of law colleges and university departments were comfortably away from these experiments. We continue to see the ill effects of their isolation. There exist spaces of excellence and large deserts of average equipments. Prof. Menon's mind was alive to these and spared no time to explore and implore, to diminish this great social divide.

The first few years of Bangalore Law School were great lessons in institution building, well meaning public figures like the former Chief Minister of Karnataka Mr. Ramakrishna Hegde, great supporters like Justice. V.R. Krishna Iyer, Justice P.N. Bhagwati, Mr. Ram Jetmalani, and Mr. V.R. Reddy (Former Additional Solicitor General), Mr. Soli Sorabjee, Mr. F.S. Nariman, stood by Prof. Menon. To instil confidence and plant optimism in the minds of the first few batches of students was no easy task. Every brick of the building and every plant in the campus like every book in the library have stories to tell. I wish, with all my monthly travels to the law school during those years to be with Prof. Menon extending my own squirrel like support, I had chronicled my versions of the unfolding events.

The innumerable contributions made by Prof. Menon to the causes of law and justice touch a wide range of issues and concerns. His captainship as the first director of National Judicial Academy is responsible for the acknowledgement of the Judicial Academy as an important National Institution of great potential. Generation of Judges, academics and lawyers have been so drawn to its activities that the Academy today enjoys international reputation and esteem.

His recommendation towards setting up an Equal Opportunities Commission perceived by him as an alternate route to social justice is awaiting the attention of the central government. His contribution to changes in criminal justice system through the Malimath Committee report is yet to receive its fullest consideration and debate. His contribution to the report on Centre- State Relationship bears the imprints of original thinking. In all this efforts and activities Prof. Menon always brought a distinct stamp of his own, always fresh, always original and always inspiring.

While we remember Prof. Menon, we cannot be in default by not acknowledging the great sacrifices of Mrs. Rama Menon. I can say with good deal of personal knowledge that she made his life what he really wanted to be, hardly ever concerned about personal comforts and material advancements. Today she has lost her life companion and a void which cannot be filled anyone of us. The time Prof. Menon spent for the community and in recent years for the cause of continuing legal education, has taken a huge toll on his health. The Nation's gain in one way, is a supreme personal loss of his family. All students, teachers, judges and friends will do well to place their due appreciation of the life spent by Mrs. Rama Menon as a great companion to a remarkable human being.

The author is a Senior Advocate at Supreme Court & Former Member, Law Commission of India.